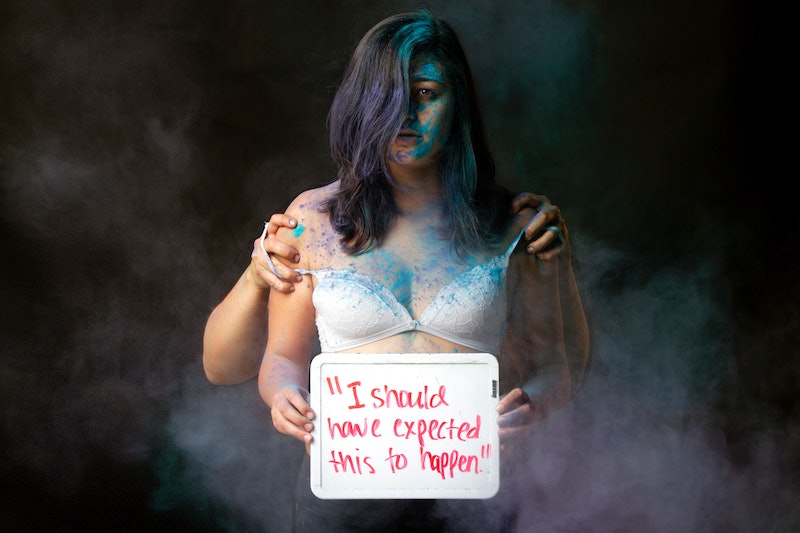 In the wake of the court case that shocked and horrified the country, the photo series "Dear Brock Turner" by photographer Yana Mazurkevich for Current Solutions condemns the culture of victim-blaming in which Turner's assault occurred. Many feel that the former Stanford student's six-month prison sentence for sexually assaulting an unconscious woman was ridiculously light. In six powerful photos, models stare directly into the camera while disembodied arms grope them from behind, each woman carrying a different example of the victim-blaming rhetoric so often used in cases of sexual assault. When gathered together, the absurdity of statements like "I should know how to protect myself" or "I shouldn't have been walking alone," which place the responsibility of preventing assault on victims (instead of perpetrators), is impossible to ignore.

Mazurkevich is the in-house artist at Current Solutions, a student-run organization dedicated to spreading awareness of assault, abuse, and gender-based forms of violence. On June 22, Current Solutions published Mazurkevich's photo series, which features images echoing statements similar to the ones made by Brock Turner, his father, and his friend in letters written to Judge Aaron Persky before Turner's sentencing. They all refused to place the responsibility for the assault where it really lay: on Turner. Instead, everything from Turner's past achievements to college party culture were used to excuse or carry the burden of responsibility for the assault — which was a stark contrast to the victims letter to Turner, which is unflinching in its depiction of living with the aftermath of sexual assault.

Both Turner and his father's letters to the judge spoke of how assaulting someone affected Turner's life. Most notably, his father dismissed the assault as "20 minutes of action." These lame justifications, along with Turner's light sentence, perpetuate a culture which excuses people who assault and shames victims for not protecting themselves.

"Most people know the statistic that one in four women are assaulted during their college career, but what most people don’t realize is that this happens to one in four women they know," Current Solutions co-founder Maxwell Fong said in a statement provided to Bustle. "By putting faces to these stories, we’re showing the world that people are not afraid to speak out."

Added co-founder Elan Timmons: "We are passionate about raising awareness because these issues are never going to go away on their own. We need people to realize that they are prevalent and worth solving, and we want to come up with tangible solutions."

Current Solutions' slogan is "Stories that change minds, hearts, lives, statistics. Stories that change stories." And as "Dear Brock Turner" illustrates, our cultural narrative around rape and sexual assault needs to change. "Dear Brock Turner" is a powerful reminder that rape culture is alive and well today, and until we learn to place the blame for assault where it belongs, we continue to fail survivors.