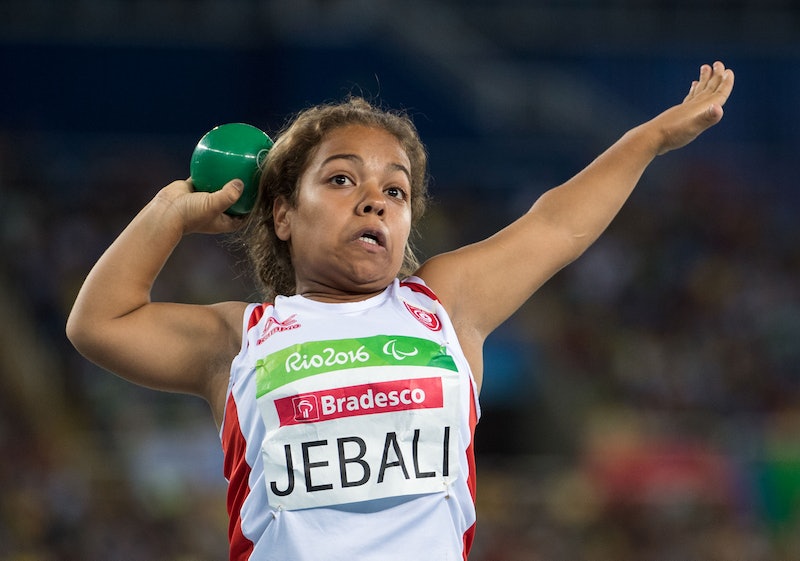 If you're still mourning the end of the Olympics in Rio, you should know that you have another set of games you could be watching: the 2016 Paralympic Games in Rio are happening right now. Unfortunately, you're going to have trouble catching them on TV due to the paucity of coverage (though it's still possible) — but you can always watch the Paralympic Games online. With the games comes a slew of amazing athletic feats — as well as disablist themes in both the media and the public. Everyone seems to have a very difficult time coping with the fact that some disabled people are world-class athletes. But some of this commentary is innocent and ignorant, a desire to acknowledge an interesting cultural event without really understanding its cultural importance. So I thought that perhaps I ought to do everyone a favor and talk about how to talk about the Paralympics. (Say that ten times fast.)

This is an important conversation to have, because the way we talk about disability, including disabled athletes, influences the way we think about it in a broader sense. Many people aren't well-versed in issues important to the disability community and the Paralympics provides an opportunity to talk about them, whether we're discussing Vogue Brazil's shocking decision to Photoshop models as amputees rather than using Paralympic athletes or talking about slashes to social services that make it difficult for disabled people to live independently.

Here are five rules for enjoying and talking about the Paralympic Games without being ableist.

What's the problem? Disabled people feel like this is objectifying and infantilizing. We want to be celebrated for our accomplishments just like anyone else — in other words, a Paralympian like Jessica Long, who has medaled 17 times in swimming, isn't impressive because she's disabled. She's impressive because she has 12 gold, three silver, and two bronze medals in swimming.

Let's practice: "Wow, Jessica Long is an amazing swimmer!," not, "It's so inspiring that Jessica Long has overcome her difficulties!"

Many people struggle with how to talk about disability, and so language like "afflicted with," "suffers from," or "wheelchair bound" (in a non-bondage context) tends to crop up a lot in the media when disabled people are for once getting some attention. You'll also hear a lot of euphemisms like "challenged," "handicapped," "special needs," and "differently abled." Using this kind of language feels very patronizing, and it positions disability as a negative.

It's OK to talk frankly about disability! You can say "Cindy has cerebral palsy" or "José uses a wheelchair for mobility" or "Miyoko is disabled." Being frank and honest breaks down stigma about disability and simply describes it as part of who someone is. As advocate Lawrence Carter-Long puts it, #SaytheWord.

You may have heard that you should always use person-first language when talking about disabilities ("person with disabilities," "people with disabilities"), in which case you're probably wondering why I've been referring to "disabled people." The answer lies at the heart of a pretty intense debate in the disability community over how we think about disability, not just how we talk about it.

Person-first language is an outgrowth of the medical model, popular in the U.S., which positions disability as a personal medical problem. The goal is to focus on individuals, not their disabilities, in a way that advocates like The Arc argue is humanizing. Identity-first language comes from the social model, popular in many regions of the world, which argues that while individuals may have impairments, it is society that disables them — goalball player John Kusku has an impairment (near total vision loss, and legal blindness), but it's society's failure to accommodate his impairment makes it difficult for him to navigate the world. Proponents of this model argue that disability is a value-neutral part of someone's identity, with the stigma coming instead from society. (Do we say "person with gayness" or "person with Asianness"?)

Arguments on the subject can be extremely passionate (here are advocates Emily Ladau, Lydia Brown, Cara Liebowitz, and Amy Sequenzia writing on it). Ultimately, you should decide which terminology you want to use on the basis of how you want to conceptualize disability — and hopefully this brief taste makes you want to learn more — but you shouldn't tell other people what kind of language to use, either.

Here's a perfectly nice neutral tweet about a Paralympic event of note:

Let's practice: "I really enjoy watching the athletes with disabilities compete in the Paralympics, and I wish adaptive sports were on television and in the news more often," or "I agree, disabled athletes really get short shrift in the media and the sports community."

The Paralympics are not an Olympic consolation prize. They are an extremely serious competitive event featuring star athletes from all over the world. Just as with the Olympics, Paralympians spend hours a day in training and they must compete in a series of qualifying meets. In addition to qualifying, they also need to be classified — the Paralympics breaks many sports down by degree of impairment, as otherwise some athletes would have incredibly unfair competitive advantages. (Think of the way weightlifters and boxers, both disabled and nondisabled, are classified.)

Much of the conversation about Paralympic athletes is very infantilizing, with people expressing awe and amazement that disabled people can compete in sports while also making comments that suggest they think of them as second-class athletes or people who deserve a special prize just for trying. This is incredibly insulting for people who spend years and sometimes decades shooting for the Paralympics. Are you a woman in a heavily male-dominated field? Does it make you furious when people make sexist comments about how you're pretty good, for a girl? Yeah. Now you know how this feels.

Even the official Paralympics Twitter can't seem to help itself:

Adaptive sports (as they're sometimes called) don't get a lot of air time. While some Paralympic sports, such as dressage and the triathlon (which Team USA ROCKED this weekend), might be familiar to nondisabled people, while others might be new to you, like goalball and wheelchair rugby (if you love watching brutally violent sports, you will love wheelchair rugby). The Paralympics provide a rare opportunity to see top-class athletes competing. As a bonus, by watching and supporting the Paralympic Games, you send a message that they deserve equal funding and air time.

So how do you talk about cool sports and athletes without slipping into disablism? Focus on them as people, and their sports. Discuss their disabilities when they're relevant, but don't bring "inspiration" into the mix. Remember that Paralympic athletes have incredibly high levels of physical fitness and training — any old disabled person off the street couldn't do what these athletes do, any more than an average nondisabled person could compete at the Olympic level. Take a look at this profile of swimmer Ellie Simmons as an example. Sara Spary with Buzzfeed didn't focus on her disability, but on her sport — her specific disability isn't even discussed until deep into the article. The article doesn't objectify or infantalize her: It's just a straightforward athlete profile.

Check out the focus here on the athlete and her accomplishments:

Let's practice: "I'm super excited for wheelchair rugby, it's my favorite Paralympic sport!," not, "It's so amazing to watch people in wheelchairs do what they do in rugby!"

So please, go forth and watch the Paralympics, my friends — at least, what coverage you're able to catch, since there seems to be a bit of a conspiracy to hide the existence of the Paralympics away from tender eyes.