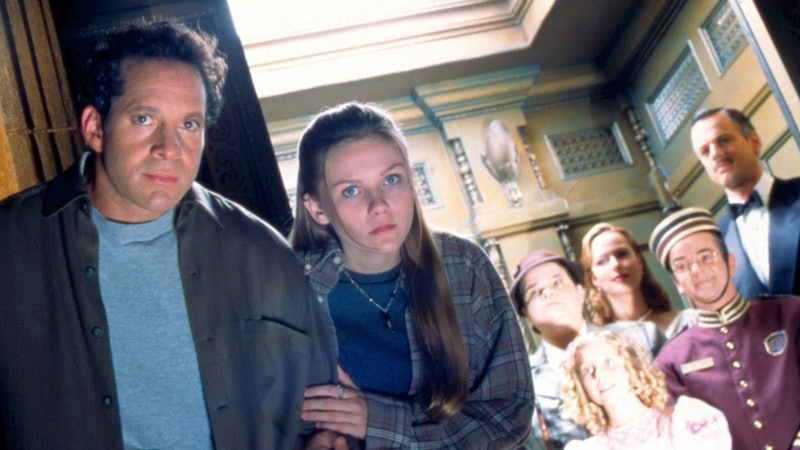 Today, I am a huge horror movie fan — bring on the scary dolls, creepy neighbors, and masked stalkers, because I delight in it all. Of course, becoming comfortable enough with onscreen scary stuff didn't happen overnight — I actually bolted out of the theater during a particularly terrifying moment in The Ring. Instead of throwing myself into full-on horror flicks, I started off with movies that were just this side of horror — including the 1997, made-for-TV movie Tower Of Terror .

Now that the theme park is getting rid of one Tower Of Terror, it's the perfect time for me to re-watch one of the "horror-lite" movies that got me into the genre in the first place. Of course, no matter how many times I've re-watched this movie as a kid, I couldn't remember everything. Here's what I noticed upon my re-watch of Tower Of Terror:

1. Sally Shine Was Played By Morgan From Boy Meets World

Specifically the second Morgan — Lindsay Ridgeway — who played Cory and Eric's younger sister from 1996 to 2000. In the TV movie, Sally Shine is basically Shirley Temple, except, unlike Shirley Temple, Sally Shine's soul becomes trapped in the haunted Hollywood Tower Hotel one stormy Halloween night. Who knew that was a price of fame?!

Nia Peeples, the actress who plays Emily's mom on Pretty Little Liars, stars as a newspaper editor in Los Angeles who has to deal with the movie's hero. Speaking of:

3. Buzzy Is The Least Likable Hero Of All Time

Maybe it's because Buzzy is played by Veronica Mars creep Steve Guttenberg (he played Woody Goodman, who was anything but a good man) but there's something that I loathe about this guy. For starters, he's a disgraced journalist who comes into his ex-girlfriend's office on the regular to pitch story ideas, rather than, I don't know, sending her an e-mail. When he's not doing that, he's bribing his niece with necklaces to pose as aliens in order for him to shoot cover stories for a National Inquirer-esq magazine. That niece is played by —

Dunst was already kind of a big deal by the time this TV movie came out — she had already appeared in Jumanji and had an arc on ER.

5. This Is Straight-Up Ride Footage

The exterior of the Hollywood Tower Hotel is literally the Disney ride. A+ for clever marketing, Disney.

6. The Backstory Is So Twisted

So basically, this movie is about elevator murder. One Halloween night in 1939, five people vanished from the elevator during a Hollywood party — never to be seen again. The witness to the crime, a young girl named Abigail, grew up to become an old lady obsessed with setting the souls free, but like, let's be real — these people were straight-up killed, even if no one wants to say that.

It's just, like, a normal apartment complex in Hollywood right by 101 Coffee Shop. The scariest thing about it is that it's walking distance to the Celebrity Scientology Center.

8. It Features Way Too Real Commentary About Hollywood

When Buzzy tries to send away the (ghost) actress who shows up to post for his tabloid story, she retorts with: "So, it's another 'too' job then? Too too young, too old, too skinny, too fat, too everything but what you need." Umm, preach, girl.

9. Melora Hardin Is The Ghost Actress

The Transparent and 17 Again actress gets aggressively hit on by Buzzy before it's revealed that she's actually the ghost of a dead starlet and already attached.

10. Buzzy Really Is The Worst

After Buzzy learns the truth — that there are the souls of innocent ghosts trapped in the hotel — he decides to abandon helping them altogether, instead declaring that he's going to be rich because he just discovered the existence of ghosts. And, after all, why would be bother helping "some moldy old ghosts [he] doesn't even know?" Way to empathize, Buzzy.

11. The Twist Is Seriously Effed Up

It turns out that the sweet old lady that begs Buzzy for help "saving" the ghosts of the Hollywood Tower Hotel is actually Sally Shine's totally bananas sister. Abigail was so jealous of Sally's fame that she decided to murder her and a bunch of other innocent people in the hotel's elevator. For a family movie, that's just a tad intense.

12. This Doll Is Disturbing AF

Someone really needed to get Abigail into therapy in 1939.

13. So Is Abigail Laughing Maniacally At The Hotel Gate

How this movie didn't give me nightmares as a child, I have no idea.

14. If This Happened In 2016, Things Would Be Way Different For Abigail

Just a thought: if Abigail's sister was super famous in 2016, Abigail could have totally used that to at least get a reality show out of the deal.

Abigail already succeeded in killing her sister Sally in 1939, but decides that isn't enough. She has to like, super kill her on Halloween in 1997 by... condemning her soul to the underworld? This woman can hold a serious grudge.

Abigail's entire reason for getting rid of her little sister was that no one cared it was her birthday the Halloween Sally and the others got into that elevator. Except, joke's on Abigail: the whole reason that Sally was in the elevator in the first place was so she could get to Abigail's surprise party. A surprise party for the woman who wanted to murder Sally twice. There is no Hallmark card you can buy that could possibly makeup for this, yet because Sally is annoyingly perfect, she forgives Abby.

Finally, the moment we were all waiting for!

The ghosts reunite with their long-lost relatives, and Buzzy gets his girl. For a movie in which this group of people just learned that black magic and ghosts are very, very real, it ends on a very uplifting note.

19. Abigail Gets Off Way, Waaaay Too Easy

Seriously... how was this awful person not damned to the Underworld for the murder of five innocent people?! Or at least taken to prison?!

Check out the entire movie here:

The Tower Of Terror won't make you feel as on the verge of vomiting as the ride will, though it's cheesiness may make you just a touch queasy.