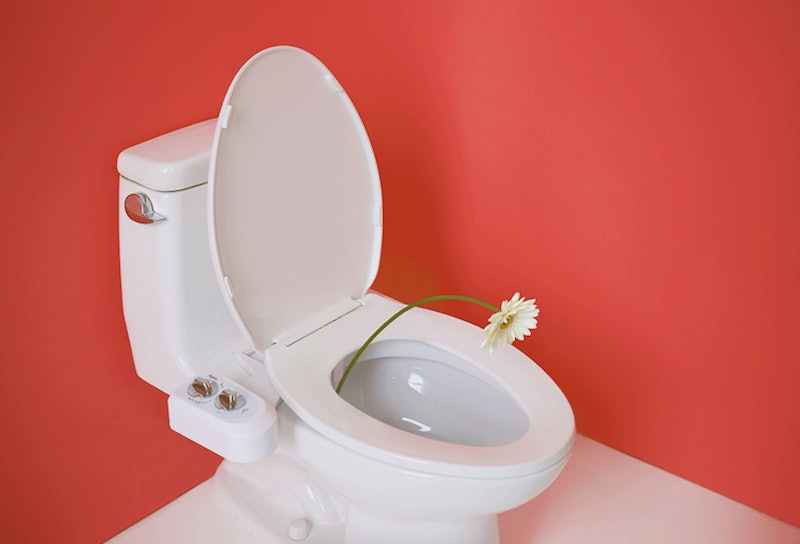 I gotta be honest with you, I'm not a gal who thinks much about her butt (besides how it looks in my jeans or how I feel after I've been sitting on it all day at work). Talking bodily functions here, I kinda just clean my butt after I go to the bathroom and then move on with my day. Because of that, I never get super excited about bathroom products, and particularly not toilet products. So it took me a bit to get excited about the new bidet attachment called Tushy, "For People Who Poop," even though it was made by the lovely humans who make the period panties THINX.

I started getting their Tushy marketing emails a few months ago, and they were delightfully mysterious. I mean, what is a bidet anyway? And how do you pronounce that word? (Answer: bee-day or bid-ay depending on how you read.) A bidet is a bathroom fixture that uses water to clean your parts. It's actually (I learned) a French invention from the 1700s that started off as a bowl of water you would squat over and use to splash onto your parts after you’d done your business. Bidet is the French word for a small pony, so basically this is a "cleaning pony" you’d ride post-pee. Or something like that. The modern porcelain bidet was created by Americans in the 1900s, but not many folks in the ol’ U S of A got into it and so it was mostly exported and adopted in other countries. Which is why the only bidet you’ve ever seen is in your worldly great aunt’s house … until now, that is.

Tushy is innovative because it’s an add-on to your existing toilet. Historically, bidets were a totally separate item — and who has the money or space for another toilet-like thing in their bathroom? Tushy pretty much clicks onto your toilet and turns it instantly into a dual toilet-bidet, making bidet living attainable for those of us with just a few extra dollars (they start at $59). I decided to find out if it was worth the investment.

The plan was pretty simple — install a Tushy bidet into my bathroom and check it out for a week to see if it could improve my bathroom experience. How did it go? Well, I'll tell you.

Tushy is supposed to be extremely easy to install, I was told. Unfortunately, my bathroom is of the cramped Brooklyn variety, and there wasn't enough space to fit the Tushy, the bulk of which hangs off the right side of your toilet. I mean, just check out the tight fit on my set-up. It was a non-starter.

Luckily for my experiment (and my life), my partner’s bathroom is much roomier and totally had enough space for my new Tushy. (And luckily for him, this means he now gets my free Tushy to clean his very lovely butt with whenever he pleases.)

I gotta be honest — the hardest part about my Tushy was getting it installed. There are only a couple steps listed on the one-page instructions list, but they were kinda confusing and vague. I definitely made it work, but it wasn’t as easy as 1, 2, 3. I wish I’d known about the video instructions, which are way easier to follow. If you are feeling stressed or know you break everything you touch, it may be a good idea to invite over that friend of yours — you know, the maker friend who has some plumbing experience.

2. Using It After Peeing & Pooping

Now that I had my Tushy in place, it was time to get acquainted. I quickly learned that it’s extremely easy to use — after you pee and/or poop, instead of reaching for toilet paper, you just turn the dial on the side to release the stream of water.

Something good to know is that the first time you do this, it will be a bit alarming. This is totally normal — I mean, without a bidet, it would be pretty weird for your toilet to start spitting water at you! It took me a couple tries to learn the perfect angle to position my body over the toilet so that the stream of water hit my intended areas in the right way. It really is set up to be easier for butt-cleaning as opposed to vagina-cleaning, but maybe that's just how I sit on the toilet.

It will also take a few tries to figure out how much you actually want to turn the dial to release the water. My first time, I turned it up all the way and it was too strong for me. I’ve since learned that I only need to turn it about halfway. Tushy's got a lot of punch to her!

3. Using It After Sex

I'm fluid-bonded with my partner, which means that I don't use condoms with him (we're both tested regularly). But that means that penis-in-vagina sex can get pretty messy, what with all the vaginal wetness and then the semen. So I was pretty excited to see if the Tushy could cut down on the toilet paper I usually use to sponge myself off after a good romp, as well as the stickiness that ensues when I don't get all of it off me, which pretty much happens every time. Well, I'll tell you, the pressure of the bidet just rinsed all that material right on out of me. Success!

4. Using It During My Period

I timed this experiment brilliantly to be during my period so I could check out (and tell you all about) how good Tushy was cleaning menstrual fluid — and it was pretty good! I mean, when you’re on your period, your uterine lining is constantly sloughing off and coming out of your vagina — but it’s not happening at every moment in a steady stream. Tushy definitely was nice in getting more of the menstrual fluid out of the front part of my vagina and cleaning my pussy lips, leaving me feeling fresh.

Of course, it’s not going to make your flow end earlier by cleaning out your uterus. The stream has limits! But it definitely made feeling clean during my period easier.

Since getting my Tushy, I've also learned a ton about the impact of bidets, on both health and the environment. Like, did you know that bidets are more hygienic than toilet paper? They wash off (or out, if we’re talking up your butt or vagina) bacteria and fecal matter, while with TP you’re smearing it on your skin as you wipe. They can even help wash out the bacteria that causes urinary tract infections (UTIs), and using bidets can also minimize irritation and chafing caused by wiping if you have to go a lot (like if you have irritable bowel syndrome or incontinence).

I also learned that bidets are better for the environment, because if you use a bidet, you use less toilet paper. I say "less" — not "none" — because it’s still important to dry off your parts after using a bidet; your vagina in particular is healthiest when it’s dry. I found that one or two squares of two-ply TP worked best to pat myself dry after being hosed by my Tushy. That's way better than the 57 sheets the average American uses each day.

After living with a Tushy bidet add-on in my (partner’s) house for the past week, I can say that it has vastly improved my life. With Tushy, I feel a minimal environmentalist kick whenever I use my one square of toilet paper instead of the usual wad, but more importantly, I just feel cleaner. Post-sex cleanup has gotten way easier, faster, and better, which is particularly awesome. If I need to pee or poop after I get out of the shower, the shower no longer feels like a waste.

Do I think you need to run out and buy one of these? It’s totally up to you, but if you’re a fastidious person you may want to check it out. I have a feeling you’ll like it too.