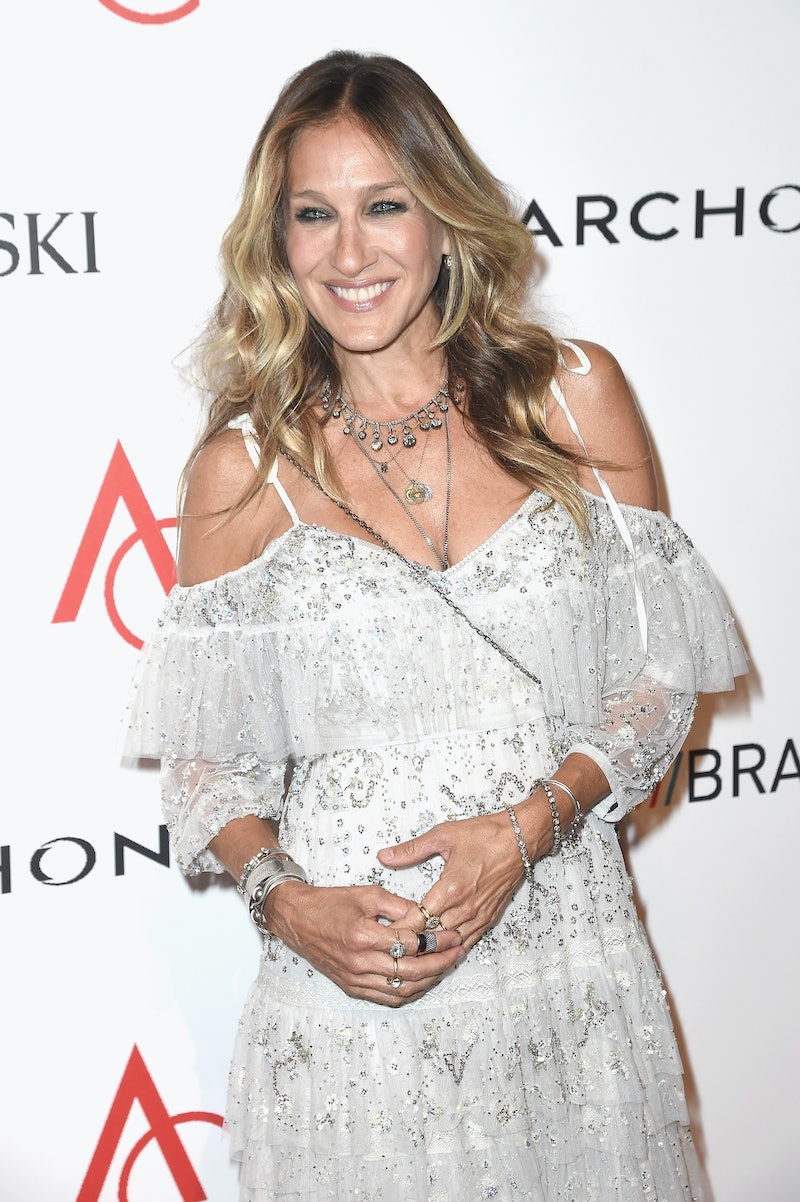 Sarah Jessica Parker is having a moment. Her first HBO show since Sex and the City, called Divorce, is premiering in October, and now she's set to star in an untitled new movie, announced by The Hollywood Reporter on Sunday. In the new film, she'll play a chanteuse, but can Sarah Jessica Parker actually sing? After all, SatC fans won't recall any scenes of Carrie Bradshaw bragging about having a great voice, so it's natural to question whether or not Parker herself can sing.

THR confirmed that Parker will indeed sing in the role. She'll play Vivienne, a New York chanteuse in the as-of-yet untitled film. Not much else is known about the plot, but Parker will also serve as a producer on the film, and House of Cards writer Laura Eason is the screenwriter. Fabien Constant, who has directed fashion documentaries and high fashion advertisements, is set to direct. Basically, it sounds like Carrie Bradshaw's dream come true.

Except that Carrie was reluctant when she had to sing karaoke in a very memorable Sex and the City 2 scene. She didn't sing much on SatC, but Parker actually has major singing chops. Her best known roles (SatC, Failure to Launch) just haven't been musical ones, unlike her husband Matthew Broderick, who's known for starring in The Producers and How to Succeed in Business Without Really Trying. But the talent is there.

Parker's career actually began on Broadway. She starred as the titular Annie on Broadway in the late 1970s, a role that required some serious cutesy belting. Her early movie roles, meanwhile, were in the music-oriented movies Girls Just Want to Have Fun and Footloose.

One of Parker's most iconic roles (at least for '90s kids) was as one of the Sanderson sisters in Hocus Pocus. While Bette Midler's rendition of "I Put A Spell On You" is, for good reason, the most memorable musical number of the movie, SJP got her own song, the creepy "Come Little Children." Since you'll probably be re-watching the film this October, keep your ears pealed for her big moment.

During and after Sex and the City, Parker wasn't doing all that much singing, but her first return to TV was a musical one. Glee fans might remember that the actor guest-starred as Isabelle Wright, Kurt Hummel's fashion magazine boss. Parker's performance as a stylish mentor figure was beloved by critics, and she had some great musical numbers.

Parker has also returned to Broadway throughout her career. She's appeared alongside her husband in How To Succeed In Business Without Really Trying and in the fairytale musical Once Upon a Mattress.

So, if it isn't obvious, the answer is: yes, Parker can sing, and she seems like the perfect choice for this new stylish and musical role.