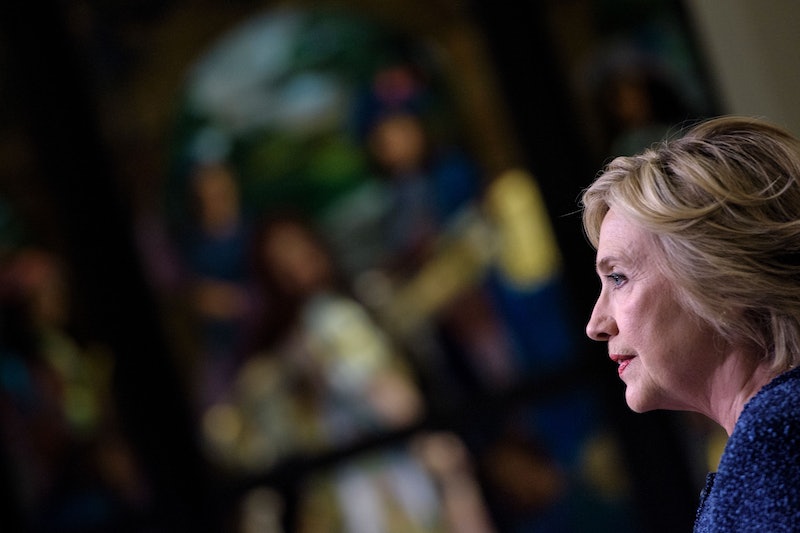 On Sunday, Hillary Clinton abruptly left a September 11th memorial in New York. Video from the event appeared to show the Democratic nominee struggling to stay balanced as Secret Service agents escorted her into a van, and not long thereafter, her campaign announced that she's been diagnosed with pneumonia. Hours later, though, Clinton was seen leaving her daughter's nearby apartment, unassisted and appearing perfectly healthy. So, how serious is pneumonia, and how big of a concern is it for Clinton and her campaign?

“Secretary Clinton has been experiencing a cough related to allergies," Dr. Lisa R. Bardack, who examined Clinton on Sunday, said in a statement. "On Friday, during follow up evaluation of her prolonged cough, she was diagnosed with pneumonia. She was put on antibiotics, and advised to rest and modify her schedule. While at this morning’s event, she became overheated and dehydrated. I have just examined her and she is now re-hydrated and recovering nicely.”

Before this incident, Donald Trump's supporters and surrogates had been attempting to stoke concerns about Clinton's health, the suggestion being that she's not physically well enough to serve as commander-in-chief. But is Clinton's pneumonia really a cause for concern, or is it much ado about nothing?

As far as pneumonia goes, the risk of fatality varies wildly depending on the patient's age. Older patients are at the highest risk: Over half (about 40,000) of those who died from pneumonia in 2013 were above the age of 75. That same year, pneumonia killed 7,040 people in the 64- to 74-year-old age group (Clinton is 68). Pneumonia is commonly treated with antibiotics, cough medicine, and fever reducers. In serious cases, patients may be hospitalized or placed in intensive care units.

Trump's supporters will undoubtedly see her pneumonia as confirmation that she's physically unfit to be president. Clinton's defenders will respond that plenty of people recover from pneumonia just fine, and point to her subsequent appearance outside Chelsea's apartment later in the day as evidence that there's nothing to worry about. Only time will tell how serious Clinton's case is. Similarly, it remains to be seen whether this will become a significant campaign issue or just one of countless forgettable mini-stories from the trail that's quickly forgotten.

More like this
How 5 People Upended Their Lives To Fight For Abortion Rights
By Hannah Smothers
Here’s How Lizzo Is Supporting Abortion Rights After The Roe v. Wade Reversal
By Brad Witter
How To Fight For Reproductive Rights, Based On How Much Time You Have
By Courtney Young
Boris Johnson’s Leadership Is In Question – Again
By Bustle UK
Get Even More From Bustle — Sign Up For The Newsletter