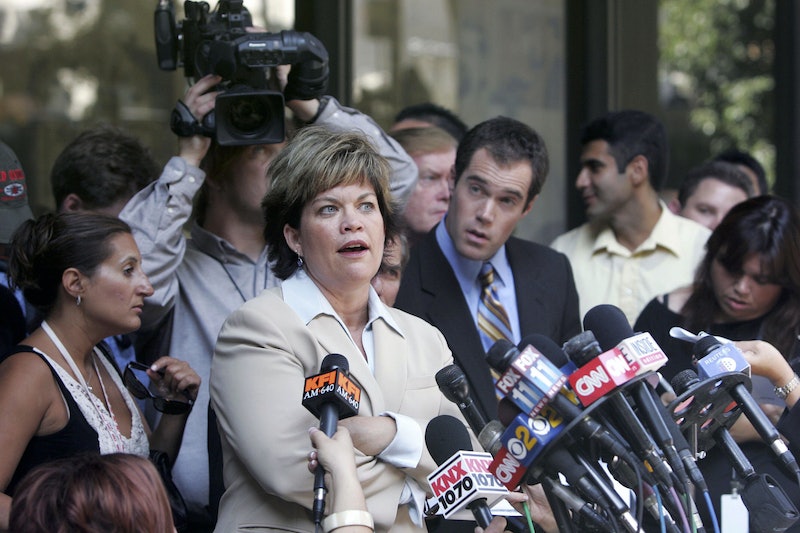 If this month in American media is anything to go by, there are few things that so enduringly capture public attention as an unsolved true-crime case involving a pretty young girl. The public's appetite for all things JonBenét Ramsey — the 6-year-old pageant winner who went missing and was later found murdered in her parents' Boulder, Colorado, home in 1996 — has not abated in the two decades since her death. In fact, new interviews with her brother (who was 9 years old when she was murdered) are being promoted, TV specials are being aired to mark the anniversary of her death, and people across the country are reading about the case with a renewed fervor. As former Boulder, Colorado, police chief Mark Beckner, who worked on the case, said in a Reddit AMA, "The media attention and the intrigue of a good murder mystery attracts lots of people. Add a small beauty queen and it only intensifies the interest."

There's one clear reason why the case has remained such an object of fascination: Nobody has ever been convicted of murdering Ramsey. But there are many unsolved crimes in the world, and usually, when it becomes clear that a resolution is not forthcoming, public interest peters out rather than increases. Clearly, something in the JonBenét case strikes deep within human psychology. But why is that?

The most plausible explanation is that a combination of several factors make it an eternally fascinating (if macabre) case for the American public, combining moral outrage, schadenfreude, parental taboos and a host of other things that engage us deeply. Even if the case is ever solved, our interest won't necessarily abate, because it's not "who did it?" that interests us most; it's the whole tragic narrative itself, which manages to incorporate elements tied to beauty, violence, death, and much more.

But psychology tells us that we're not all being peculiar for retaining such an interest in the case, and it's not all the media's fault. Though there have been no specific psychological studies regarding people's fascination with the Ramsey case, there are some psychological theories as to why different elements of it may retain such a hold on us. None of this is to say the psychological reactions that may draw us to the Ramsey case are positive or justified — but they may be what has kept the public fascination with the case so intense for so long.

So what's going on?

The fact that JonBenét was an extremely attractive child who competed in pageants probably played several distinct roles in our collective fascination with the case. For one, humans are drawn to beauty, particularly facial beauty. A study in 2004 found that even babies are likely to spend greater portions of time fixated on attractive faces than unattractive ones, a tendency that develops when they're between just one and seven days old.

Other studies have found that encountering beauty activates the opioid center of the brain linked to drug response and happiness, and that people pay far more attention to attractive people in conversational settings. JonBenét's beauty wasn't just a part of the narrative; it was one of the key elements as to why people couldn't look away.

2. We Have An Innate Tendency To Judge

The fact that JonBenét's beauty was presented, in pageants and photos, in what we might consider an "adult" fashion — with cosmetics, styled hair, and sophisticated, professional-looking smiles for the camera — led to many questions judging her parents for presenting her that way. But the urge to judge the Ramseys isn't just us being suspicious or rude; according to a recent study from Oxford University, the urge to form judgments about people who seem "different" from us may be hardwired into our brains.

According to the study, our amygdalas make snap judgments about things we perceive as "threats." This is a holdover from early humanity when, according to Women's Health, "These knee-jerk biases ensured our survival, protecting us from outsiders who didn't look or act like us and were likely rivals for food, shelter, or other necessities. But as we evolved and as our society developed more just and democratic ideals (our explicit attitudes), we retained that primitive machinery of the subcortex. And it still kicks into high gear today, vigilantly detecting Us versus Them, and automatically treating Them as a threat."

None of this is an excuse to judge others, of course. But it may explain why we have stayed so interested in a case that gives our brains so many opportunities to judge.

Our fascination with the Ramsey case may also fit into a piece of human psychology that makes us feel interested in the "downfalls" of people who seem more successful than us. It reared its head when Taylor Swift was taken down by Kim Kardashian, and pops up regularly when we read tabloid claims about celebrity sadness and millionaire divorce. It's schadenfreude, delight in the suffering of others.

Schadenfreude, generally, is based around our sensation of enjoying the misfortune of others. A study in 2011 found that people with low self-esteem were more likely to feel it, but that overall, the feeling seems to stem from a desire to feel less envious of others or better about ourselves (hence, why we end to feel it towards people who we perceive as more privileged than us).

The Ramseys — a healthy, wealthy family living in a high-end area of Boulder — may have seemed privileged to many, so it makes unfortunate sense that many would feel schadenfreude regarding their tragedy.

4. We Are Shocked By Any Possible Violation Of The Parent-Child Bond

The attachment between child and parent is the basic foundation of human survival; human babies are so helpless that, without a caring adult, they can't survive to adulthood, or indeed for very long, period. This bond is so hyped-up in media, so embedded in our culture, that anything that crosses it is immediately seen as taboo. It's why post-natal depression, which often makes mothers feel completely incapable of bonding with their newborns, is still often a hidden condition, as the mothers feel "monstrous" and unnatural.

The Ramseys were fully cleared of any wrongdoing regarding the case in 2008, but the fact that JonBenét's parents had initially been considered suspects in her murder may have led some to become fascinated by the case because they saw within it a potential violation of this bond.

5. We Are Drawn To Learn About Crimes

Why are so many of us fascinated, at a safe distance, by crime? The allure of true crime to the populace, in the words of criminologist Scott Bonn, is "euphoric": the adrenaline rush we get from observing people in serious situations is one that gives us pleasure.

But if you want to get theoretical, there may be other reasons we enjoy learning about gruesome crimes. In an article for The Atlantic on the phenomenon of obsession with celebrity death, professor of psychiatry Gail Saltz posited a theory about the human psyche: She believes that we may all be a little inclined to hurt others and ourselves. We're fascinated by disasters and risk not only because of the adrenaline rush, but, Saltz says, because of our internal impulses to "be a little sadomasochistic." However, most of us, says Saltz, never put these "urges to do something terrible" into practice.

From this perspective, fascination with the JonBenét case — or any other grim crime — gives us an "out" to think about some of the vilest parts of human nature without ever having to experience them ourselves. It's just a theory — but it does place our true-crime fixations in an interesting potential context.

One of the most interesting ideas about the enduring popularity of JonBenét's death comes not from her own case but from humanity's historical frenzy over serial killers. According to some experts, some of us like to learn about killers because it makes us feel a kind of psychological safety: We try to bring ourselves close to the worst possible outcome in order to somehow make ourselves feel protected.

"Getting close to criminals and perpetrators of horror," concludes a BBC report on serial killer fascination, "is a way of experiencing death without falling victim to it, of becoming a witness to death and thus exerting some control over it." Replaying the horrors of a crime, particularly one without a confirmed narrative or a captured killer, is, Scott Bonn comments, a matter of survival; it "shocks our sense of humanity and makes us question our safety and security." We may like to learn about JonBenét Ramsey's case because it makes us, weirdly enough, feel safe.