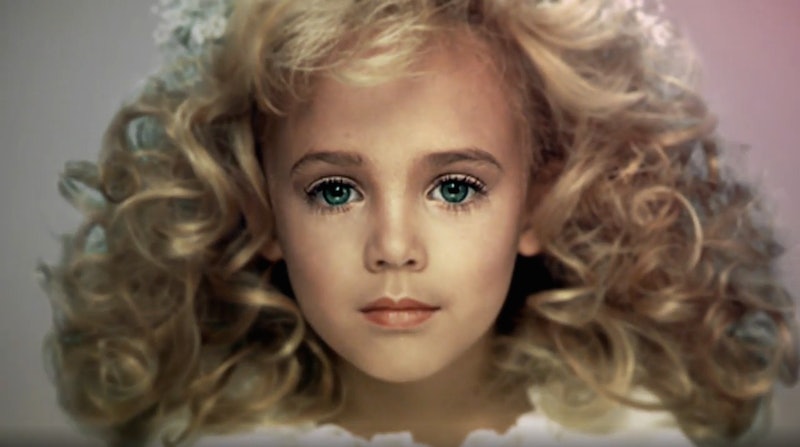 If O.J. Simpson's trial and acquittal for the murders of Nicole Brown Simpson and Ron Goldman was the case that the media was obsessed with in early 2016, then the unsolved murder of JonBenét Ramsey is taking that spot for the latter half of the year. There are three TV documentaries about JonBenét Ramsey being released on television in 2016 and it all begins with A&E's documentary, The Killing of JonBenét: The Truth Uncovered. It has been 20 years since the child beauty pageant queen was murdered and as the case was never truly solved, the media is taking this anniversary as an opportunity to revisit the horrific crime scene again, starting with the two-hour The Killing of JonBenét: The Truth Uncovered on Labor Day.

As The Denver Post documented, 6-year-old JonBenét was discovered dead by her father John Bennett on Dec. 26, 1996 in her 15-room Boulder, Colorado, home hours after her mother Patsy had called 911 to report that her daughter was missing and that she had found a ransom note. The cause of death was asphyxiation from strangulation with inconclusive reports that she may have also been sexually assaulted. Patsy and John Bennett were suspects at one point, but maintained their innocence and were officially cleared of any involvement in their daughter's death in 2008, and the details of this horrid crime — a Christmas murder of a child beauty contestant from a wealthy family — helped lead to the public's morbid fascination with the crime then and that fascination has carried over now, 20 years later.

While there will be three documentaries airing on television, Lifetime is also creating an original movie about the murder, which Deadline reported is tentatively named Who Killed JonBenét? and is scheduled to premiere later in the fall. This is far from the first time there has been a TV film about JonBenét as both Fox and CBS released movies in 2000, Getting Away with Murder: The JonBenét Ramsey Mystery and Perfect Murder, Perfect Town, respectively. Dr. Phil will also feature an exclusive interview with JonBenét's brother, Burke, who was 9 years old and in the home during the murder, for three episodes starting on Sept. 12.

However, if you're still looking for answers about what happened to JonBenét during Christmas 1996, then here is all you need to know about the three documentaries that are coming to TV in 2016. Note all times are in ET.

1. The Killing of JonBenét: The Truth Uncovered

The first of the three docs, which ironically was announced last, is A&E's The Killing of JonBenét: The Truth Uncovered . What distinguishes this particular documentary from the pack, according to Us Weekly, is that it features a rare sit-down interview with JonBenét's father, John, as well as the first airing of Burke's 1998 interview with the district attorney's office. The documentary also claims to feature "exclusive and stunning DNA evidence" that offers insight on the theories of a family member being involved.

Like A&E's documentary, Investigation Discovery's three-part special boasts that it will "present new evidence," according to Variety. While the tagline of JonBenét: An American Murder Mystery may be, "Uncover exclusive footage from the infamous case," the interviews from an array of people involved in the Ramsey's lives and the murder are why you should tune in. Deadline reported that the interviews will include law enforcement who worked on the case, private investigators who the Ramseys hired, a journalist who covered the case from the beginning, an investigator for the Boulder County District Attorney's office, and even the woman who made JonBenét's pageant costumes.

3. The Case Of: JonBenét Ramsey

The longest of the three documentaries is the six-hour CBS' docuseries, The Case Of: JonBenét Ramsey . CBS says that the series will bring "together both the original case's investigators and new specialists utilizing modern technology and techniques to try to get to the bottom of what happened." While I don't think any stunning new revelations will come from this, this documentary will definitely be the most comprehensive and they even built a life-size replica of the Ramsey's Boulder mansion for it.

By the time you are finished watching all three documentaries, you will feel like a JonBenét Ramsey murder expert. Unfortunately, that won't bring back the young girl or mean that anyone will be closer to solving this 20-year-old case.