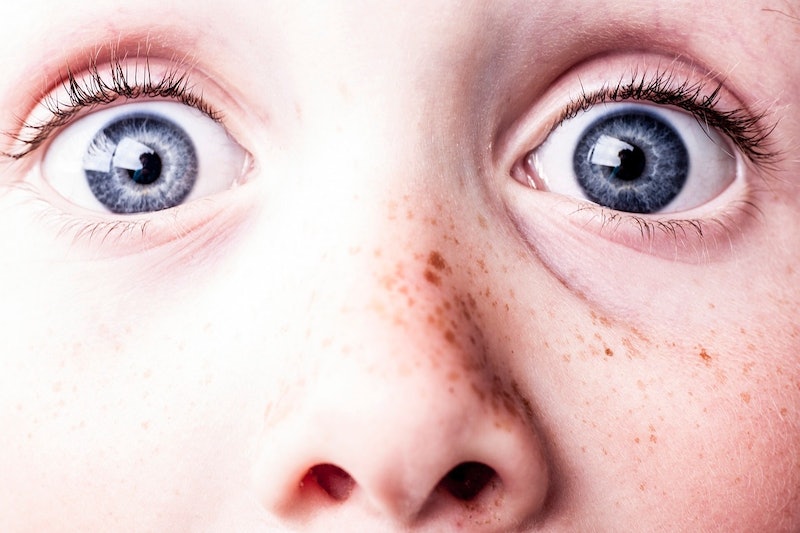 If the Great Dress Crisis of 2015 taught us anything, it’s that perception and reality are not the same. We also learned that all it takes to ruin families and destroy lives is a really good optical illusion. So it should come as no surprise that this disappearing dots illusion is breaking people’s brains and making them question everything they think they know about reality. Will this visual puzzle make you feel like you’ve been shoved straight into The Matrix? Probably. It's basically the red pill.

The image shows a grey and white grid, crossed with diagonal lines. Called “Ninio's Extinction Illusion,” the grid features twelve black dots, placed at line intersections across the grid. This tricky part is that, although the dots can be seen individually or in small groups, it’s almost impossible to see all twelve at the same time. In fact, the dots you can see may seem to dance around, jumping from place to place, visible one moment and disappearing the next. When I look at it myself, I can trace each of the twelve dots if I slowly scan my eyes across the grid. But when I try to see all of them at the same time? Suddenly I only see two.

I’m not the only one whose mind has been blown by the illusion: Akiyoshi Kitaoka, a psychology professor in Japan, posted the image on Facebook only yesterday and has already gotten over 9,300 shares. Game developer Will Kerslake posted the illusion on Twitter yesterday afternoon and has racked up more than 18,600 retweets. Many thousands of people are thus looking at this grid and collectively wondering, “What the hell?!”

Ninio's Extinction Illusion was named for French scientist Jacques Ninio. In a paper about the phenomenon, Ninio and colleague Kent A. Stevens write,

When the white disks in a scintillating grid are reduced in size, and outlined in black, they tend to disappear. One sees only a few of them at a time, in clusters which move erratically on the page. Where they are not seen, the grey alleys seem to be continuous, generating grey crossings that are not actually present. Some black sparkling can be seen at those crossings where no disk is seen. The illusion also works in reverse contrast.

Rachel Becker at The Verge, talking to vision scientist Derek Arnold, explains that we can attribute the illusion to humans' weak peripheral vision. We can clearly see what is right in front of us, but we have a hard time deciphering what’s happening on the edges of our vision. Our brains essentially have to guess what’s going on at the borders and fill it in so that we can perceive a cohesive whole. Since, in this image, you’re mostly seeing a white and gray grid, that’s what your brain fills in at the periphery, masking the black dots. The black dots you do see may appear to waver and jump around because your eyes aren’t totally steady; when they move even a little bit, your point of focus moves and thus the black dots do, too.

But although we know something about how visual tricks like this work (Thanks, Science!), that knowledge doesn’t make optical illusions any less disorienting. People all over Twitter have been weirded out by their confused perception.

Can you see all twelve dots at once? If you’ve only got a couple, take comfort in the fact that you’re not alone. If you can easily see the whole dozen, well, you’ve probably got superpowers. Just remember to use your superior senses for good.