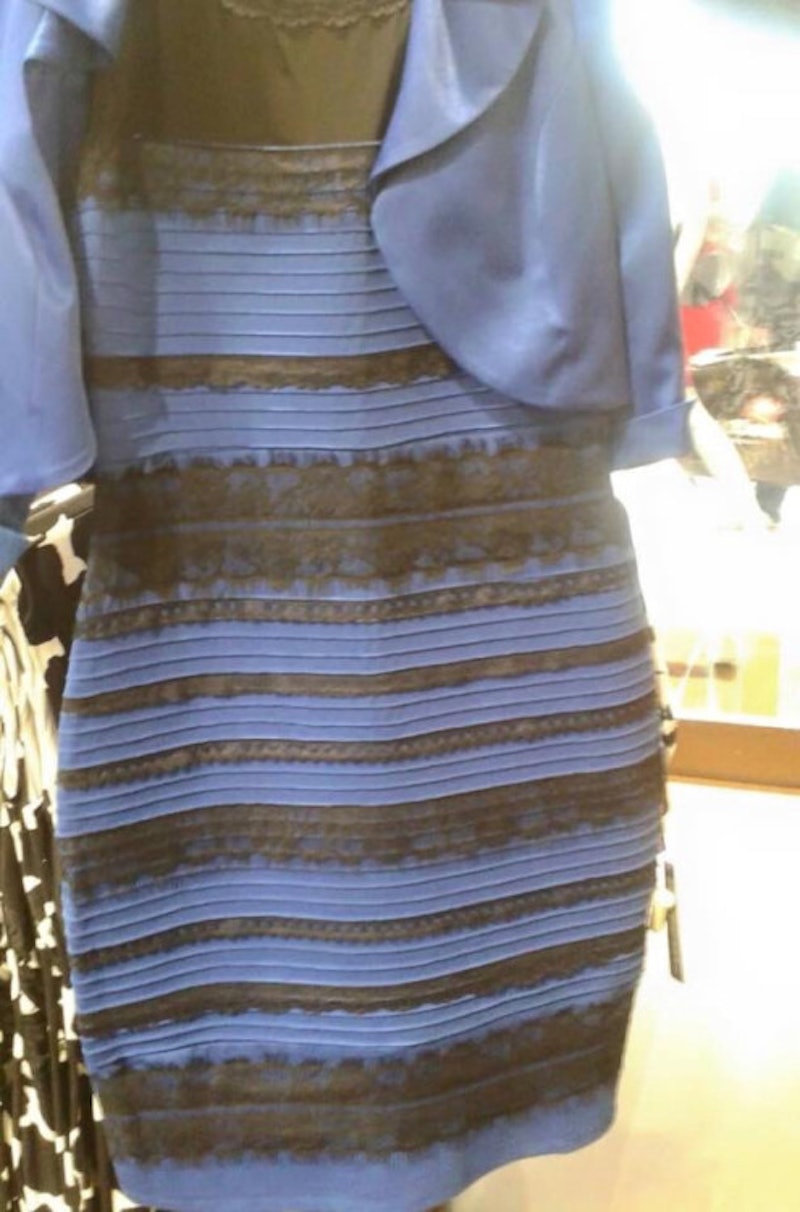 The internet officially lost its mind last night when a Scottish singer Caitlin McNeill, going by the name of “swiked,” posted a picture of a lacy, body-con dress to Tumblr, asking “[G]uys please help me - is this dress white and gold, or blue and black? Me and my friends can’t agree and we are freaking the fuck out”. The post quickly started making the rounds and, as you are surely aware by this point, people all over the world had a collective meltdown as they separated into white/gold and blue/black camps, prepared to debate this issue to the grave. Celebs and politicians chimed in with their opinions, and scientists, photographers, and other color experts tried to make sense of it all. Here is a rundown of the various theories that have emerged in the last 12 hours, handily collected so that we can all just let it go already.

Some debaters took to the science of human vision to explain the mysterious discrepancy. Adam Rogers reports in Wired that it all comes down to the way that the human eye has evolved to perceive color in a world with varying levels of light:

Light enters the eye through the lens—different wavelengths corresponding to different colors. The light hits the retina in the back of the eye where pigments fire up neural connections to the visual cortex, the part of the brain that processes those signals into an image. Critically, though, that first burst of light is made of whatever wavelengths are illuminating the world, reflecting off whatever you’re looking at. Without you having to worry about it, your brain figures out what color light is bouncing off the thing your eyes are looking at, and essentially subtracts that color from the “real” color of the object.

So usually, the brain filters out reflection and colored light, allowing us to perceive the colors we all recognize as red, blue, yellow, etc. In this case, however, the lighting on the dress is such that different people’s brains are filtering the light in different ways, correcting the image to be white and gold or blue and black. As Bevil Conway, a neuroscientist researching color and vision at Wellesley College, tells Wired,

Instead of looking to science, some have sought to prove the dress’s true colors by finding examples of the same dress in different lighting. The dress was designed by British clothing company Roman Originals. On its website, the dress is sold in blue and black; there are also white/black, red/black, and pink/black versions, but there is no gold or brown to be found. The company confirmed via Twitter that the dress is blue and black, as did Laura Coleman, the model who wore the dress in a Roman Originals photo campaign. She writes from her Instagram account, “Okay so I was the first to wear this dress and just to confirm it's definitely black and blue! #thedress.”

So that’s what we know about this godforsaken white/gold/blue/black/brown dress. The final word on the matter? STOP. For all that is holy and good, just STOP.

More like this
15% Pledge Director LaToya Williams-Belfort On The Impact Of Supporting Black Business
By Dominique Norman
Everything You Need To Know About Ephemeral Tattoos
By El Hunt
How To Get Your Hands On The Pat McGrath X Supreme Nail Kit
By Justine Knight
Prefer Alcohol-Free Perfumes? Water-Based Fragrances Are On The Rise
By Audrey Noble
Get Even More From Bustle — Sign Up For The Newsletter