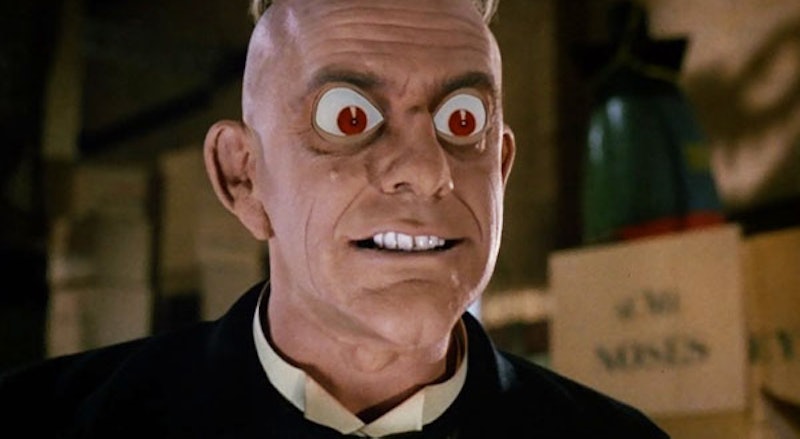 I’ll be honest, even in my ripe old age of a quarter century, I’m afraid of just about everything. OK, most of it is about the state of the economy and whether or not my most recent hookup will text me back, but you know, I can only handle horror-free Halloween movies. Honestly, you’d think that growing up in the ‘90s would’ve prepared me for a lifetime of fear, considering all the frightening fictional characters from our childhood.

Listen, there are some crazy characters from my youth that are part of the reason I still sleep with the light on, and I’d like to think I’m not alone in that. In this haze of '90s nostalgia that's all the rage these days, I’ve found a lot of pitch black corners lurking around everyone's favorite cartoons and films — and for many of us, a lot of the same figures lurk in that darkness. Some of them, granted, are less fearsome with age, while others will never lose their fear factor. Either way, let’s take a moment to respect their place in our nightmares.

For your consider, here is a mélange of villains, demons, ghosts and gremlins that kept us all from having sweet dreams as a kid (and occasionally, as an adult).

Leave it to Roald Dahl to conjure up the ultimate schoolhouse dictator, and the 1996 Matilda film to bring that terror to the screen. Trunchbull is such a hardcore sociopath that she made eating chocolate cake into a form of grotesque torture. Digest that for a second.

2. The Ghastly Grinner From Are You Afraid Of The Dark?

There are plenty of Are You Afraid The Dark? episodes that are way too scary for the original demographic. "The Tale of The Ghastly Grinner" is the only one that still keeps me awake at night as an adult.

3. The Crypt Keeper From Tales From The Crypt

You know what, I can't honestly say I know what The Crypt Keeper's deal was, because technically, Tales From The Crypt was an HBO show that probably skewed for grown-ups. Irrelevant, though — this freaking corpse was all over the place in the early '90s, and Baby Mary Grace was not a fan.

I feel like Darth Vader is very effective as a villain when you're introduced to Star Wars at an incredibly young age; my brother and I, for instance, were indoctrinated in the ways of the Force before we hit pre-school. Subsequently, I don't expect everyone to agree unanimously with this pick in a post-Hayden Christensen world — but, as a kid, he was the perfect figurehead of evil, and so long as you can understand that blowing up a planet is psychotic, this guy was something worth fearing.

5. HIM From The Powerpuff Girls

Retrospectively, HIM is absolutely the best baddie in Powerpuff Girls, claws down. That aesthetic and attitude is something worth beholding: it's very late '90s Marilyn Manson meets Dr. Frankenfurter, underscored by the fact that HIM was basically Satan. It's that shrill voice, though, that really made HIM next-level creepy.

6. Any And All Post-Midnight Snack Gremlins In Gremlins & Gremlins 2

Look, I understand that's a lot of Gremlins, but it's really a terror-in-numbers thing: you mess up with these little guys, who look like horrific little Furbies with extreme leprosy, and you're screwed. I can't think of anything scarier than that to the quintessential '90s kids, especially the ones obsessed with keeping their Tamagotchis and Pokemon happy at all times.

I'm so sorry for this GIF, I'm so, so sorry. Even in 2016, I still have to cover my eyes the second that Pee-Wee enters that bus (and warn my friend who haven't seen the Tim Burton classic, "There's a scary part coming up soon," because I'm not a monster).

We could all sit and argue about who is the scariest Disney villain, or we could just objectively acknowledge that the massive demon in Fantasia's "Night On Bald Mountain" is the definition of "Foreboding, Concentrated Evil."

This neo-noir with animated characters is dark to begin with, but when the primary antagonist revealed him to himself to be the squeaky-voiced toon from hell, it crossed a line of what should be acceptable in a children's film.

Much like Darth Vader, there is a specific context in which Voldemort is truly scary. In the book series, it's more understood that he's feared in the wizarding world than it's felt by the reader. By the time you get to the late '00s of the Harry Potter movies, Voldemort's image has been marred by one too many memes (and perhaps the jadedness of age). But, when you're a preteen watching Sorcerer's Stone for the first time in theaters, and you don't know what to expect when Quirrell unwraps that turban? The fear is enough to make you hide under your Gryffindor cloak, bravery be damned.

11. Ghost Of King Ramses in Courage The Cowardly Dog

Courage was dealing with creepy encounters on the regular. If this guy was knocking on my door, tho? He can have his damn slab back, and whatever else he wants.

Yep, sleeping with the lights on tonight. Not even ashamed.

More like this
The 'Hocus Pocus' Sequel Finally Has A Release Date & It Makes Total Sense
By Shannon Barbour and Radhika Menon
S Club 7’s Jon Lee Continues To Reach For The Stars
By Rachel Mantock
Alicia Silverstone Has Recreated An Iconic 'Clueless' Scene
By Frances Stewart
Kimberly J. Brown & Daniel Kountz Looked Back On Their ‘Halloweentown’ Romance
By Stephanie Topacio Long
Get Even More From Bustle — Sign Up For The Newsletter