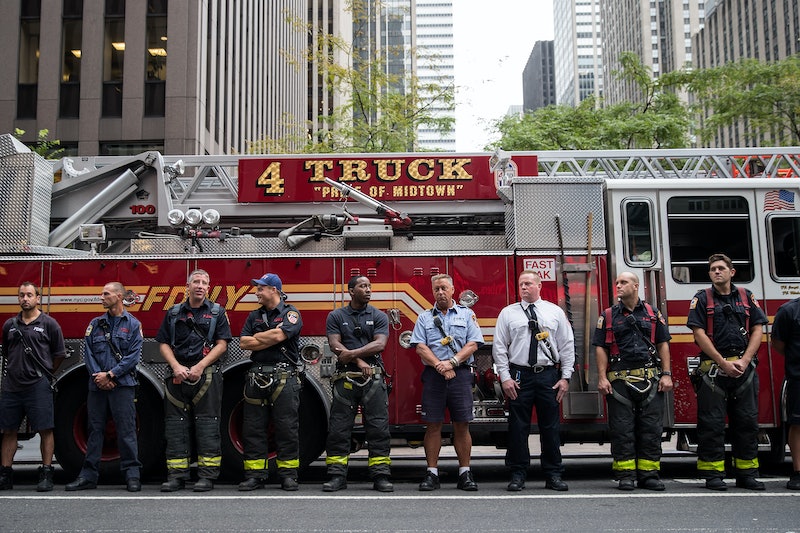 Sunday marked the 15th anniversary of the Sept. 11 attacks. Individuals across the world remembered the nearly 3,000 lives lost on that day in various ways (for example, you can donate to the victims' families here), but thousands of people were touched by one person's remembrance, in particular: This firefighter's powerful tribute to 9/11 was widely shared on social media throughout Sunday and Monday.

According to the individual who shared the image, Lezlie Bauler, a firefighter, later identified as Jason Harding, visited a Planet Fitness in Maryville, Tennessee, on Sunday morning and asked if he could climb 110 sets on the gym's Stairmaster in his full firefighter gear. He wanted to do so in memory of those who responded to the attacks on 9/11 and who climbed the 110 stories of the World Trade Center, he said.

This man asked if it was okay for him to climb 110 sets, fully suited, of stairs in honor of his fallen brothers and sisters for 9-11.

Yes sir, you can. I am not one to get emotional, but a few tears were shed. Thank you for your services.

For the last seven years, Nashville has hosted a 9/11 memorial stair climb to remember the firefighters who lost their lives on Sept. 11, 2001 while rescuing people, and to increase awareness around "community safety through physical fitness and training." According to its website, those who participate in the yearly event take a badge with "the name and photograph" of an FDNY firefighter who died on that day and climb the stairs in their memory.

Harding noted that he was unable to participate in the stair climb this year, which is why he paid tribute to the firefighters who lost their lives in a different way. He released a statement that read:

When I went to the gym this morning at 6am before coming onto shift I was only wanting to honor the fallen heroes and their families on this day 15 years ago. I was not and am still not looking for any self recognition. I have received so may private messages via Facebook from people expressing that support, gratitude and blessings. Many stated my act brought them to tears but little do they know, their support did the same for me.

Harding participated in the memorial stair climb for four years in a row but was unable to do so on the 15th anniversary. The photo of his own tribute has been shared nearly 150,000 times on Facebook, with many sharing their gratitude for his service.