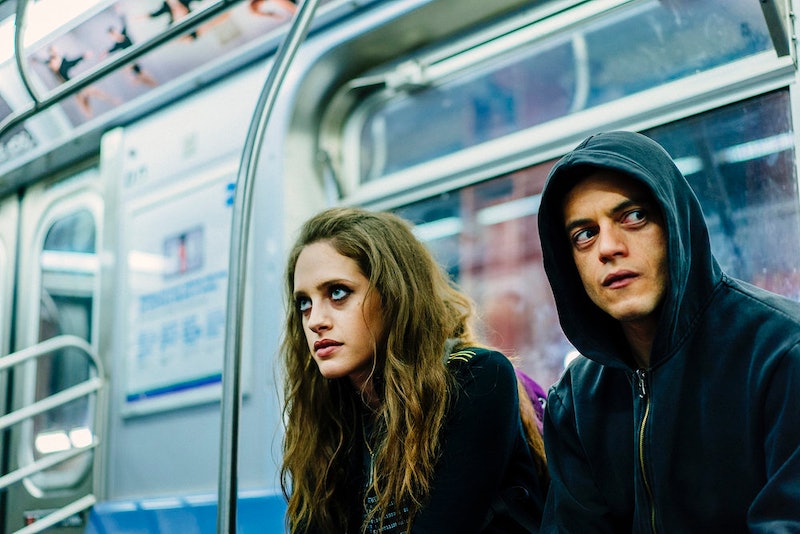 Since this show is the sole reason I have piece of tape over my webcam, I can't accurately call Mr. Robot escapist entertainment. Now in its second season, the USA drama brings the dystopia back from the distant future of YA novels and grounds it in an albeit heightened version of a current reality where paranoia reigns. The first half of the two-part Mr. Robot Season 2 finale airs Wednesday night at 10 p.m. ET. And on Sunday, the show will duke it out with its fellow nominees for four possible Emmy awards, including Outstanding Drama Series and a Lead Actor trophy for star Rami Malek. Even better, Mr. Robot is already renewed for a third season. What can fans expect from the continued aftermath of fsociety's destructive 5/9 hack? These Mr. Robot Season 3 spoilers may shed some light on Elliot Alderson's dark world.

So far, Season 2 has seen (or not seen, in the case of Tyrell Wellick) its characters reacting to the technical success of Mr. Robot's anarchic hacker group. With Elliot locked away for much of the season, his sister Darlene was on her own as fsociety leader, trying to keep her rowdy followers from bragging too loudly about their coup and dodging the FBI investigation led by a lonely, truth-loving agent. Angela dug her feet into her new job at E Corp, but used her position to help Darlene. And Mr. Robot himself proved his worth to Elliot, cementing their sometimes combative and sometimes symbiotic relationship as the most intriguing one on the show.

There are still so many questions left to be answered in Season 2: Where is Tyrell? Has Angela been completely seduced by power or is she still on Elliot's side? Are Trenton and Mobley still alive? What does the Dark Army want? But that doesn't mean Season 3 conjecture is off the table. I've gleaned these possible spoilers from comments made by Mr. Robot showrunner and mastermind, Sam Esmail.

USA gave Esmail flexibility with run time; several Mr. Robot episodes clock in at an hour plus. The creator told HitFix that he understands the inconvenience of a weekday show with a late start carrying that kind of length. "I think moving forward, I want to keep that run time as tight as possible," he said.

The Focus Will Stay On Elliot's Psyche

"I've said it before and I'm going to continue saying it," Esmail said in the same HitFix interview. "This is at heart about Elliot's emotional journey." Esmail also defended the reveal of Elliot's long delusion of living in his childhood home not as a "gotcha" moment for the audience but rather a necessary, in-character coping mechanism concocted to deal with his incarceration. What I extrapolate from this comment is that Elliot's mental illness dictates that he be an unreliable narrator for as long as Mr. Robot continues.

Mr. Robot Is Sticking Around

Elliot has tried to purge Mr. Robot from his life and failed. And he's failed because Mr. Robot is an inextricable part of him now. "That’s what Elliot has to do: see that vision of the future he wants that’s worth going through all of this for. Not only does he want to live and continue, but he realizes that fighting Mr. Robot is a moot point and an impasse," Esmail told Deadline. "Those two things have to be realized for Elliot to go to the next step." Great news for Christian Slater.

The Ending Is Already Established

Esmail told Variety that he has an outline for the "four or five" seasons he hopes Mr. Robot will be granted. “I don’t know every detail," he said. "I don’t pretend to, but I certainly know the big plot points ahead, and also know the series ending, if we’re lucky enough to get that far."

And yet, the mystery persists. These big picture spoilers leave room for plenty of surprises in Mr. Robot Season 3.