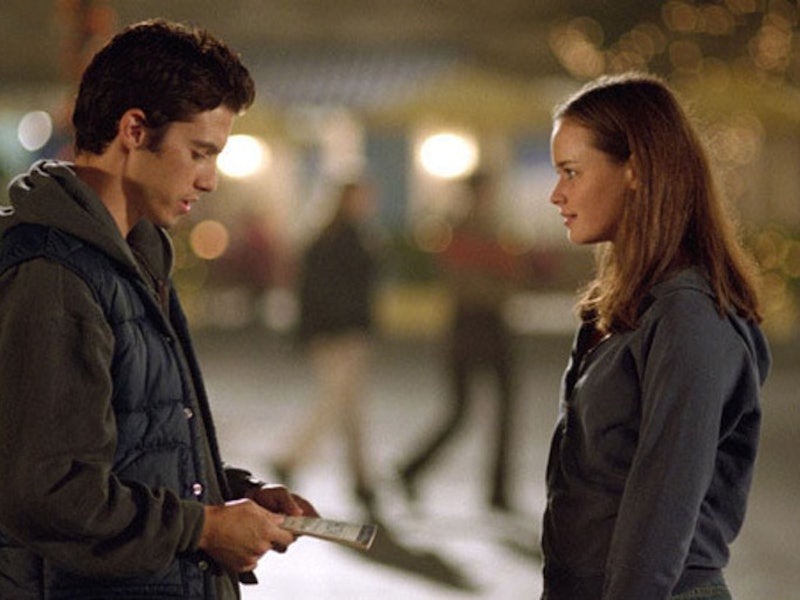 Part of anticipating the upcoming four part Gilmore Girls revival is picking a side when it comes to Rory’s boyfriends. Now, spoiler alert: the only correct side is Team Jess, but naysayers will say he’s too much of an angsty wreck for our blue-eyed perfectionist protagonist. In truth, he did have a rocky reputation during his initial stay on the show. But maybe Team Jess will have a much easier season this time around, because Jess Mariano changed so much over the course of Gilmore Girls .

Now, it’s very important to note that that change isn’t an all-at-once character make-over that happens just because he trades in New York for Stars Hollow. Despite being beloved by the fandom, Jess spends a good two seasons or so being a really hardened character that only Rory can start to crack. Throw in the fact that Jess constantly runs away from his problems, and you have a very unstable adolescent. However, when he comes back, he usually returns with some sort of epiphany. My hopes are that, with this next return, he’ll finally be the man that Rory deserves, instead of the boy with a serious James Dean complex.

In the meantime, here are just a few ways that Stars Hollow’s (least) favorite bad boy changed throughout the series.

It's important to start here because a lot of Jess's character evolution revolves around his relationship with Rory. From the moment they meet, Rory is able to bring out a softer side of Jess, the side that loves to read and debate intellectually. The sad news is that Rory's influence isn't enough to save Jess from himself; he bails from Stars Hollow time and time again out of a mix of anger, shame, and cowardice.

2. He Became A Social Pariah In Stars Hollow

Jess shows up on the scene as the atypical rebel, a troublemaker with a bad attitude. This perpetual rudeness does not make him a fan favorite, at least when it comes to the Stars Hollow townies. I mean, they had town meetings about the delinquent — although, granted, that town has town meetings over whether whether people are allowed to date. In any case, this is sort of a catch-22 when it comes to Jess wanting to stay in Stars Hollow. He isn't embraced by the town, which makes it just another place he doesn't fit in. But he, you know, also keeps snarking at everyone he meets.

3. He Got Attacked By A Swan

A vicious swan, and that left him with some nightmares for sure.

Jess was considered Mr. Reliable when he become a Walmart MVP. Unfortunately this small triumph was undermined by the fact that Jess hadn't been attending class. So, while Jess showcased that he can be hard-working in certain venues, reliable he was not.

5. He Dropped Out Of School

See: Hadn't been attending class because he was picking up extra hours at Walmart.

6. He Took To Venice To Make Ties With His Absentee Father

Look, I'm no psychologist, but I think it's safe to assume that a good chunk of Jess's fear and loathing comes from residual abandonment issues and not having a stable father figure. Luke tried to fill that role, but, with Luke's own, um, abrasiveness, it was too little, too late. So, after Papa Mariano showed up in town, Jess decided to pursue him and move in. We don't know exactly what happened; there was no spin-off to fill in the blanks. My assumption is, though, that getting closure with that situation maybe helped him move on with some of his residual baggage.

7. He Made Overt Declarations Of His Affections

Jess in Season 2 and 3 is ultra illusive, and then all of a sudden he shows up Season 4 bursting with "I love you"s. OK, that's not 100 percent true. At first, it was one "I love you" after a whole lot of illusiveness. But then you see Jess running to Yale, asking Rory to run away with him, and saying they're meant to be together. Pro Tip, boys: this is a horrible way to win an ex-girlfriend over. I'm not going to bother justifying that. What does matter, though, is that he's at least learning to express his emotions, however strange he may sound.

8. He Mended His Relationship With His Family

After Jess leaves town in Season 3, you can see him mending bridges in the little actions between the kin that he's hurt over the past few years. In spite the eyeroll-worthiness of it, he walks Liz down the aisle of her Renaissance themed wedding. And his debts to Luke are repaid... financially and otherwise.

9. He Found A Permanent Home

There's not much to say about this beyond the fact that settling in Philadelphia with a job that he loves definitely provided Jess with a much-needed sense of stability.

And, again, Rory's influence is what pressed him to be a better version of himself, tackling his dreams instead of wandering aimlessly, angrily.

11. He Mellowed Out From Being A Complete Ticking Rage Bomb

I just want to point out that, when Rory kisses him while she's still with Logan, Jess is kind of pissed, and reasonably so. He does not, though, flip out, throw a temper tantrum, fight someone, leave Philly without telling anyone, or make insane declarations that they're meant to be together. That's amazing. And it leads us to...

12. And He Accepted That His Relationship With Rory "Is What It Is" For Now

It's really really important that Jess is able to leave his status with Rory as open-ended instead of tip-toeing around feelings or trying to force her hand. That's serious emotional growth, and hopefully it's enough to mean Team Jess will have a victory in the Gilmore Girls finale.