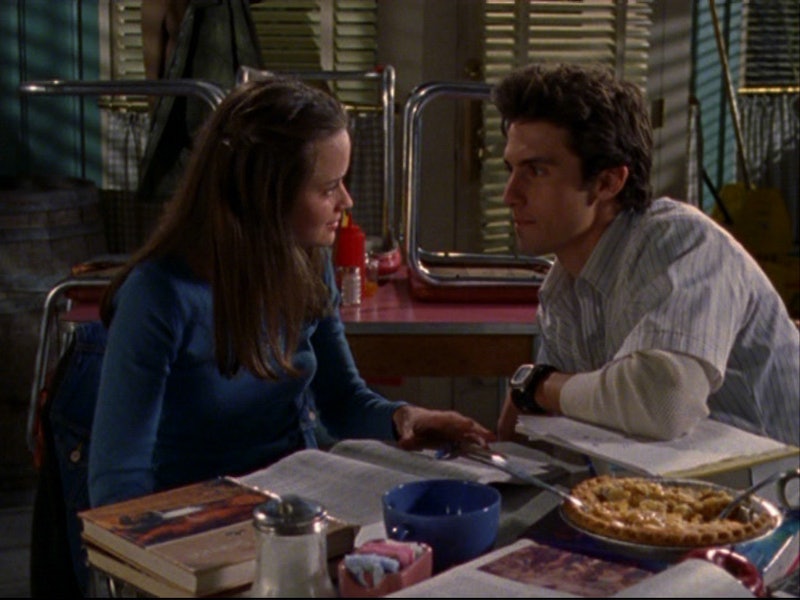 If there's one thing that I hold incredibly strong opinions about in pop culture, it's the fact Gilmore Girls' Jess Mariano is deeply misunderstood as a character. When he's first introduced in Season 2 of Gilmore Girls , Jess is a bit of an ass to say the least, scowling his way through life and showing little or no respect to anyone else besides his crush, Rory Gilmore (whom he's shown as having an instant connection with). It's easy in those first few episodes to make the mistake of assuming that Jess is nothing but trouble; a troubadour of misguided rebellion and a bit of a dropout who does nothing to help his own troubled lot in life. When he's kicked out his home by his own mother and shipped off to Stars Hollow to live with his uncle, Luke Danes, he does little to assimilate himself in the community. He plays immature pranks on the town, steals things, and instigates unnecessary arguments as a way of expressing his disdain with his circumstances. However, there's definitely one moment which changed the way (most) Gilmore Girls fans saw Jess, and it's one which also supports the idea that Jess and Rory are meant to be together.

Jess is first introduced in Episode 5 of Season 2, and as a way of trying to make the teenager feel welcome in Stars Hollow, Lorelai invites him and Luke round to her home for dinner. The evening doesn't go quite to plan with Jess making snide comments throughout, getting caught stealing a beer, arguing with Lorelai, and even trying to escape out of Rory's window. However, the two of them hit it off, and Jess even comments on the large collection of books that are in Rory's bedroom. This moment provides the essential opportunity which leads to a revealing scene at the end of the episode wherein Jess reveals a copy of Allen Ginsberg's "Howl"; a book which, as it turns out, he stole from her book collection.

What could be yet another moment proving that Jess was immature and rebellious actually ends up being incredibly endearing, with him passing the book back to Rory with notes written in the margins for her. It's a gesture which appears to both delight and fascinate Rory who looks impressed that someone has taken the time to communicate with her via such a book and in such a profound way. It also reveals that there's far more to Jess than simply being a rebel with little interest in anything else.

Not only does the annotated copy of "Howl" imply that he's both smart and creative, but also that he is capable of caring about something other than himself. He recognises a vital part of who he is (being a lover of books) in Rory, and by choosing to reveal this side of his personality to nobody else but her seems to imply a certain level of trust.

From here, Jess' love of reading and avid consumption of books becomes a vital part of his character. Though he might not be academically inclined or fond of showboating his intelligence, Jess' love for the written word highlights how smart he is and that he probably does have the capacity to apply himself academically to something, but that he simply chooses not to. His future might not have seemed as simple or obvious as Rory's did to her and everyone who knew her, but as we return to the character throughout Gilmore Girls, we see how his love of books (and, perhaps, Rory's adoration of his love for reading), helped to provide him with a future.

When Jess visits Rory in Season 6, he reveals that he's actually written an entire book, telling her that he couldn't have "done it without her." Later in the same season, she visits Jess in Philadelphia, to find him seeming mature and confident, with his life looking pretty together, while working at a small publishers. The scene shows him at home amongst his equals, chatting with literary intellectuals about poetry.

When you look at Jess' character arc as a whole, it's easy to interpret him as someone who is grossly misunderstood. Someone that few people (save for Luke and Rory), took the time to actually understand or even care for. The growth that we see in him, and the way that we understand the depth of Jess' character, is expressed from that annotated copy of "Howl" onwards. Finding a private solace in books, Jess was a character who might not have been terribly good at social situations or communicating his feelings, but within words he found a way to fully express himself and discover some much needed empathy. That one moment changed how we felt about Jess, and it also set the precedent by which many of us continued to root for his success.