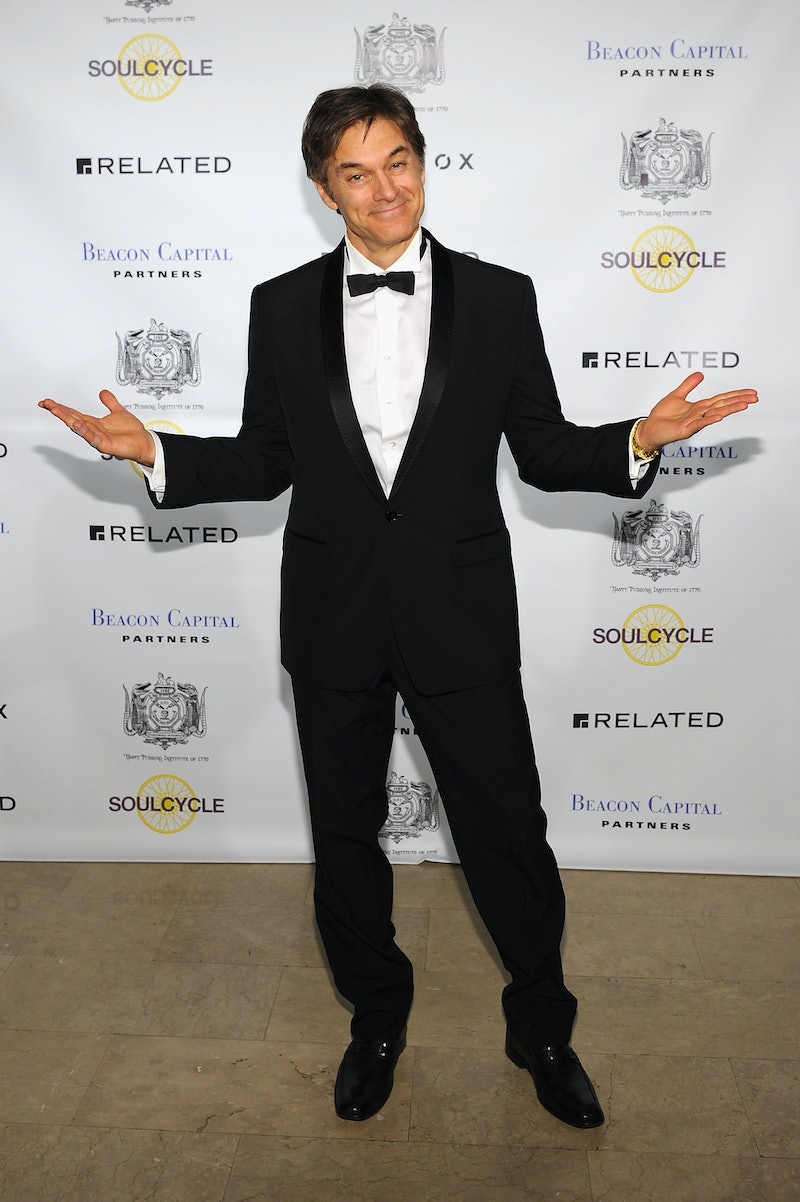 A 2014 study published in the British Medical Journal found that nearly half of the medical advice Dr. Mehmet Oz gives on his show isn't sufficiently backed up by science. Just 46 percent of all medical claims were "supported by evidence," according to the research. So, by the transitive property of BS, that makes Oz the perfect contender to interview Donald Trump, who has had a similar problem with basing his statements in fact throughout his campaign.

Trump will appear on Dr. Oz's talk show on Thursday, though Trump will not reveal his medical records on it, contrary to earlier reports. The health of both presidential candidates became a focal point this week, after video showed Hillary Clinton appearing to nearly faint while leaving a 9/11 ceremony on Sunday. After a few hours, her team shared that she had been diagnosed with pneumonia days earlier.

While critics have brought her health into the limelight as a campaign issue, Clinton fired back, saying many of her records have been made public over the last 40 years and alleged that Trump hasn't been held to the same standard. "People know more about me than almost anyone in public life," Clinton said in an interview with CNN's Anderson Cooper. "Compare everything you know about me with my opponent. I think it's time he met the same level of disclosure that I have for years."

Trump released a bizarre letter of approval regarding his health from his gastroenterologist, Dr. Harold Bornstein. Apparently written in just five minutes, the letter claimed Trump would be "the healthiest individual ever elected to the presidency."

Although Oz is an Ivy League-educated heart surgeon and a tenured professor and researcher at Columbia University, critics say he chooses ratings over scientific facts in the "magic" and "miracle" cure-alls and supplements he touts on his show. For that, the choice to discuss Trump's health on Oz's show is not a surprising one. Entertainment value over substance, sound familiar?

It doesn't take seven years of medical school to raise an eyebrow at many of the claims Oz makes on his show. Here's a look at some of the egregious things he's said and the most damning blowback he's faced.

Many of Oz's claims deal with weight loss, but his endorsement of green coffee extract as a "miracle bean" to fight fat got him in the most hot water. Oz's shaky relationship with the truth came to a head in 2014, when he was called to testify before Congress regarding weight-loss product fraud. During the testimony, Sen. Claire McCaskill grilled Oz and said, "I don't get why you need to say this stuff because you know it's not true." Oz maintained he was only trying to help people, but said, "I recognize that oftentimes they don't have the scientific muster to pass as fact. I have given my family these products."

During an interview at the 2015 Super Bowl, Oz discussed concussions and gave advice to parents, which is troubling for two reasons. One, he had recently filmed a commercial for the NFL on why he loves football, coming at a time when the league was under fire for potentially mishandling concussion incidents with its athletes; thus, Oz seemed less than objective. Oz also said that kids should be taking omega-3 fatty acids and getting vitamin D, which would aid in recovery after a concussion. But a study by the independent research group Cochrane concluded that there is little evidence to substantiate this claim.

In a 2013 New Yorker profile, Oz was quoted as saying that cancer "is our Angelina Jolie. We could sell that show every day." While that may not be medically unfound, it's an irksome statement to come from a doctor who's purporting to give advice on national attention. For diseases like cancer and Alzheimer's, where causes are still unknown, shows that focus on preventive measures may be a huge draw to worried viewers. But playing to those fears for entertainment value is, well, crass and manipulative, especially when many of the solutions presented on Oz's show have little science verifying them. No wonder a group of doctors felt compelled to send a letter to Columbia University, urging the school to disassociate with the celebrity doctor.

Red palm oil is supposed to prevent Alzheimer's and dementia in the land of Oz, but a 2004 study found that the saturated fats found in in red palm oil could actually contribute to "cognitive decline" in older people. Berkeley Wellness, which works in collaboration with the University of California, Berkeley, School of Public Health, wrote of Oz's red palm oil recommendation: "Like so many of Dr. Oz's endorsements, this one is supported by amazingly little scientific evidence."

One would hope that a doctor would recommend what they felt were the best treatments and products available, not the ones that would best line their pockets. After the Sony email hack in 2015, an email from Oz to a Sony executive surfaced, in which Oz appeared to propose pushing Sony wearable technology and fitness trackers on his show — Sony happens to be a producer. "We should leverage the Sony-driven success of our TV show into other arenas where Sony thrives, like health hardware," Oz wrote.

Oz's favorite words seem to be "miracle" and "magic." He is a charismatic guy wearing scrubs, so when he says something will cure you or melt your fat away, it's easy to take his word at face value. I mean, look at those scrubs, he's got to be legit. But many of the miracle products he has enthusiastically pushed on his audience have turned out to be at best, ineffective, and at worst, detrimental. Safflower oil and Garcinia cambogia, which Oz claimed would aid in weight loss, showed no real merit in studies. Oz called raspberry ketone "a miracle fat burner in a bottle," but others claim it can be unsafe for people with diabetes, high blood pressure, or asthma.