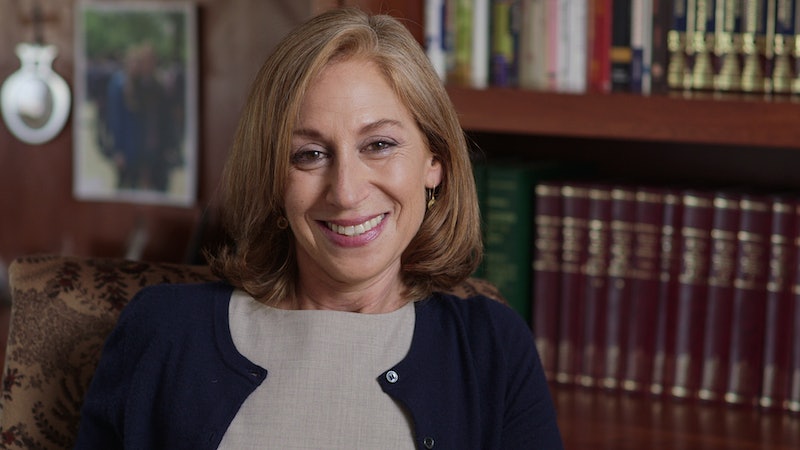 For most people, the contradictions between religious values and modern moral dilemmas are an indomitable obstacle, and nowhere is this more clear than the issue of reproductive rights. The traditional thinking is that all major religions are diametrically opposed to abortion, but according to Rabbi Lori Koffman, reproductive justice advocacy is intrinsic in her Jewish faith. As she'll passionately tell anyone who asks, abortion rights aren't about abortion itself, they're about the equality and dignity of all people.

"As a rabbi, I view the world through the lens of Jewish values and Jewish ethics," Koffman says. "Jewish values are pretty explicit about how we're obligated to pursue justice for all, and to me that means making sure that everybody's health, economic security, and wellbeing are taken care of. The people who are more vulnerable in our society that we have an obligation to actually help them and to not stand by when we see other people's health or healthcare at risk."

Koffman, the chair of the National Council of Jewish Women's Reproductive Justice Initiative, found her passion for abortion access advocacy at the intersection of her identity as a woman, a mother of two daughters, an American, a Jew, and a rabbi. She recently made a video for All Access 2016, a nationwide event organized by a coalition of pro-abortion access groups including the ACLU, Center for Reproductive Rights, and Whole Woman's Health, explaining why reproductive justice advocacy fits so perfectly into her religious and personal life. While many people struggle to reconcile controversial ethical questions like abortion with their religious values, the answer comes pretty naturally to Koffman — it's who she is.

"It's something I feel so strongly about — it's a feminist issue, it's a health issue, it's a religious issue. That's the intersection of who I am," Koffman says. "The constitutional right of Roe v. Wade isn't helpful unless you have access to it, and what happens a lot in the country is that the wealthy have access and the people who are already marginalized in society don't have access. That is just not right. That isn't the way our society should be. I want my daughters to have a world where they have all the access they need and to be able to make the decisions freely."

"The decision whether and when to have a family is one of the holiest decisions anyone will ever make."

Koffman admits that her faith didn't always play the role in her life that it does now. In another lifetime, she worked as an investment banker in a private equity firm, and lived what she describes as a "completely unengaged Jewish life." She didn't fully participate in her Judaism until just a few years ago, when she felt she could no longer ignore the call she felt to live her religion more deeply.

"People will say to me 'why did you decide to become a rabbi?' and my answer is usually, 'I kept trying not to, and I couldn't not anymore.' It was a sort of irrational, illogical thing," Koffman explains. "Everything about changing my career made no sense, but it was something that started pulling at me so strongly that I kept trying to say no to the voice in my head. I kept thinking, 'Oh my god, crazy voices are talking to me, but I have to start listening to the crazy voices or they won't go away. Either that or medicate myself.' I loved my former career, it was interesting and exciting, but I just decided that there was something else that I had to do in the world."

The bravery Koffman needed to leave an established and rewarding career to follow her heart has continued to guide her in her new life as a rabbi. It's one of the reasons she can advocate so passionately for an issue that seems counterintuitive to most people's idea of her religion (her bachelor's and master's degrees in political science are also an asset when it comes to explaining the civil liberties of abortion access). But Koffman says that the holiness of a woman's reproductive autonomy outweighs any preconceived notions to the contrary.

"The decision whether and when to have a family is one of the holiest decisions anyone will ever make," Koffman says. "It really should be up to the woman and her partner if she has one or their partner if they have one and their own religious faith, any religious advisors if they have them, and really nobody else."

In a world and society where religion seems to be more divisive than uniting lately, Koffman is diligently trying to turn that tide. Her personal interpretation of Judaism is about inclusion, advocacy, and speaking out against injustice, not about shame or imposed limitations, which seems pretty hard to argue with.

People might disagree with Koffman, but she probably won't care — she's pretty busy following her own conscience and instincts, just trying to make the world a better place as she sees it, and using the power of her faith to guide her.