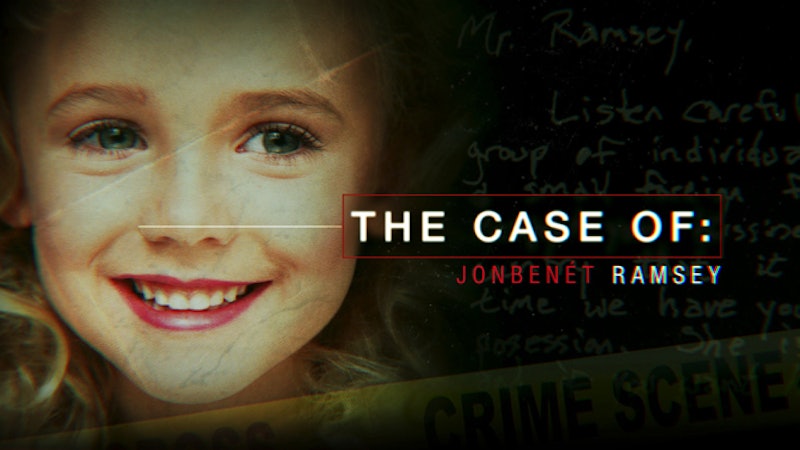 If the beginning of 2016 was all about the trial of O.J. Simpson, then it's looking like the end of 2016 will have all eyes on the JonBenét Ramsey case. Since the beginning of September, numerous documentaries and specials about her murder have started making their debut across multiple networks, including A&E and NBC's Dateline. And now it's CBS' turn to try their hand at figuring out who committed this horrific event. But exactly how many episodes is the CBS miniseries The Case Of: JonBenét Ramsey ? Evidently, this highly anticipated special has gone through a very significant last-minute change and will be much shorter than originally expected.

According to Variety, the true-crime doc — which will look to re-examine evidence and offer up new theories to the 20-year unsolved investigation — has been cut by the network from six hours to four, meaning that they shaved a whole two hours from what was originally going to air. The report claims that the producers and network executives reached this decision due to the fact that they felt that the project would make a lot more sense as a "tighter, two-part, four-hour miniseries than as a more languid six hours spread out over three parts."

So what does this mean, exactly? It means that the first part of The Case Of: JonBenét Ramsey will air as planned on Sept. 18, starting at 8:30 p.m. (ET) and running for two hours. This will be followed by the second part of the unscripted series, which will debut the following evening, Sept. 19 at 9 p.m. (ET) and run for two hours. But that's it. There will be no third installment, which was originally scheduled to be released on Sept. 25 from 8:30-10:30 p.m. (ET). Now instead, the network will use that extra time slot to expand on its NCIS: Los Angeles premiere with back-to-back episodes.

This change should help make the special a bit more concise and allow the network to highlight any new information their experts have been able to uncover. And that makes sense, especially given that viewers may be more familiar with the case now that other specials have aired and won't need as much information repeated. We may never know exactly what happened in that Boulder, Colorado home on Dec. 26 all those years ago. But with so many eyes looking back on the case that shocked the nation to its core, it's possible someone could end up discovering something that's been overlooked for the past 20 years. It may be a long shot, but if JonBenét is finally able to get the closure she deserves, then all of this will be more than worth it.