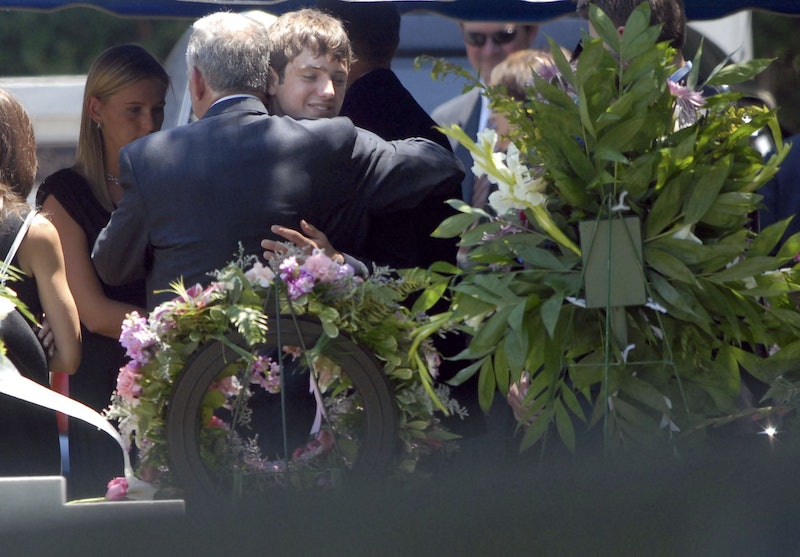 The case of JonBenét Ramsey is currently receiving a significant amount of attention — even 20 years after the fact. The 20th anniversary of the child beauty queen's murder is this December, and in anticipation, multiple networks are clamoring to release special projects exploring the investigation of her death. But even as new details from the case surface, some aspects of it remain in the forefront, including the autopsy's conclusion that JonBenét was sexually abused at the time of her death. In a recent interview with Dr. Phil, however, her brother Burke Ramsey denied the sexual abuse allegations that she was abused prior to that point.

In Burke's first public interview since his sister's death, Dr. Phil told him that while the autopsy of JonBenét's body did not prove or disprove that JonBenét had been sexually abused prior to the minutes before she died, experts believed it was possible. What was certain, according to the autopsy, was that JonBenét had been sexually assaulted at the time of her murder. In response to suspicions that this allegedly wasn't the first time she had been sexually assaulted, the Ramsey family's lawyer Lin Wood released a statement: "The Ramseys had no knowledge of any such abuse. John and Patsy Ramsey thought that this was another example of the Boulder police department's prejudice in trying to make accusations against the family."

Dr. Phil consequently asked Burke whether or not he had ever abused JonBenét, to which Burke replied, "Absolutely not." When Dr. Phil questioned him about an incident in which he had hit JonBenét with a golf club, Burke said it had "absolutely" been an accident.

Burke also rejected the notion that his and JonBenét's mother, Patsy Ramsey, could have killed JonBenét and then staged the murder by covering it up with a ransom note. "It doesn't make sense," Burke told Dr. Phil. "Not to say she never got upset, but nothing near laying a finger on us, let alone killing her child." Patsy and John Ramsey have always maintained their innocence and have been cleared by DNA evidence that doesn't match their own.

The allegation that there had been prior sexual abuse in the case of JonBenét is still a subject of speculation, though it hasn't been proven. Former Boulder Police Chief Mark Beckner recently did an AMA in which he discussed this allegation after receiving numerous questions about it. He wrote that "the crime scene was not handled properly" in the aftermath of JonBenét's murder, and in the midst of being understaffed during the Christmas holiday, Beckner claimed that the District Attorney's office allegedly put pressure on the police department to not push the Ramseys too hard in the beginning.

He explained that he and his office were frustrated by this, and that he believed "there was evidence that would indicate prior sexual abuse" despite the autopsy's inconclusive results. Beckner also responded to another question by claiming that "based on evidence of prior damage to her vagina and hymen, experts told us there was evidence of prior abuse. No way to really know if it was chronic." However, the autopsy never proved or disproved whether this abuse had occurred prior to the moments preceding her death.

Even though it has been almost 20 years since JonBenét was killed, the question of how she died — and what conditions might have led to that — is still a prominent one. The third part of Dr. Phil's three-part interview series with Burke is slated to air on Sept. 19.