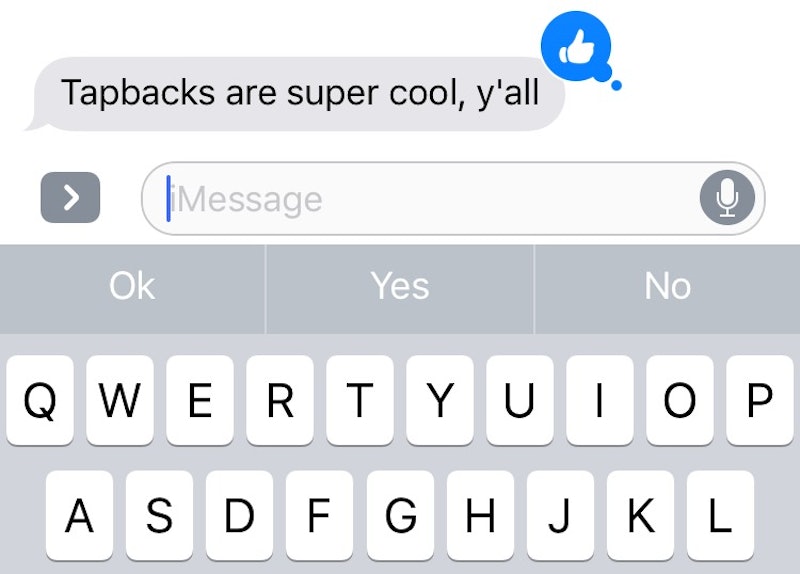 The new Apple mobile operating system, iOS 10, is finally here, along with a whole slate of exciting new features — including a new Messages function called Tapbacks. So what is a Tapback, exactly? It's basically a way to react to text messages without having to type a full response, making it the quick reply option you never realized you wanted.

It's easy to miscommunicate over text messages; for example, a lack of a response, while frequently absolutely benign in intention, can sometimes feel very hostile. If you don't hear back from someone, it's all too easy to convince yourself that they misunderstood the tone or meaning of your message and that now the person you were talking to is angry at you. So even though your friend might have rightly just interpreted your message as the final word in the conversation that didn't need a response, in your mind, your friend is now grievously offended.

So for all our sakes, it's probably best that iOS now has Tapbacks, which allow people to share their reaction to a text without typing a complete message. Tapbacks show up as icons that you can add to a message you've received. Options include a thumbs up, a thumbs down, a heart, exclamation points, a question mark, and a the word "haha." The icons appear next to the message you received inside a thought bubble, implying that they're not so much a reply as a bit of insight into what you were thinking when you saw it.

Some of the Tapbacks are obviously things we already had at our disposal — for instance, you could easily simply send a question mark in response to a text, or an emoji heart, or a laughing emoji. But Tapbacks are not only potentially faster than scrolling through your list of emojis, they also carry with them a slightly different connotation.

Instead of saying something new, Tapbacks can be seen as a kind of social cue to provide context in a conversation. If you were having a conversation in person, you could guess from someone's face that they liked what you said, or found it funny, or that what you said made them angry. But in text message form, you don't have those kinds of body language-based hints. And according to science, even the people who know you you best aren't good at filling in the blanks. Tapbacks might therefore be sort of the text message equivalent of body language, offering, for example, virtual thumbs up motions instead of IRL ones.