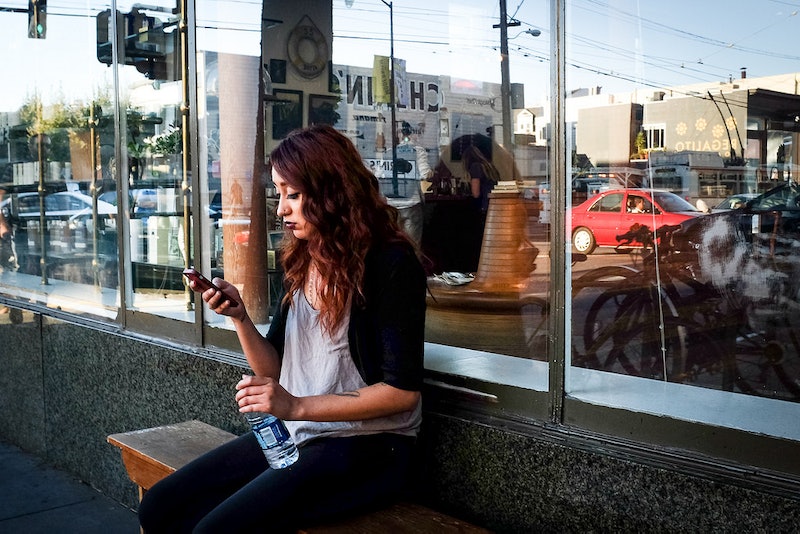 Nothing in this world fills more fear in my heart than opening up a text from a friend that has a period at the end of it. Although we don't talk about it much (perhaps because we are all too afraid), sending punctuation like that in a text transcends passive-aggression, and I don't think any of us can even adequately explain why. But at least we can be sure we're not going totally bonkers, because a study at American University confirmed that sending periods in texts makes you seem angry to the recipient. They also found that the text senders will do it on purpose, meaning they are very intentionally using punctuation to set the tone of a text. I see you, period-texters.

I know I am a person who is accused of abusing exclamation marks, but bear with me for a moment while I explain: I would rather come off as an painfully enthusiastic person than offend someone over text. The other night, for example, a friend and I were deciding who should go meet the other one when I was a good four miles away. "I'll take the subway!!" sounds a hell of a lot more casual and lighthearted than "I'll take the subway." In fact, I'd argue that adding a period to anything is so aggressive that it's basically like adding the word "bitch" to it, i.e., "I'll take the subway, (bitch)."

As if it isn't already stressful enough trying to figure out how to navigate in this tech-tastic world, Psychology Today author David F. Swink emphasizes just how much of a problem this can be not only in relationships, but in the workplace:

"Without these important non-verbal cues, our imaginations fill in the blanks of what the person sending the message sender intended, and how they felt about the communication. We rarely fill in the blanks with positive intentions. This can lead to misunderstanding, damaged relationships, and poor business decisions."

The study primarily focused on punctuation, but really, there are all sorts of ways we can accidentally sabotage ourselves over text. Just in case you weren't already suffering from enough indecision, we also have to overanalyze these:

Honestly, sometimes there are just no words and emoticons are the classiest way to go. The trouble is hoping that when you send them, people don't think you're using it to shut down a conversation (even if you are) or that you're secretly a 12-year-old who just got their first smart phone on an emoticon bender.

The time that passes between texts

The day iPhone came up with that thing that says "Read: 12:15PM" should have been the day Apple burned itself to the ground. True, you can disable it, but we all have that one friend who didn't, and you can't help but be offended when you see that they've read it and haven't replied (even if you are a chronic non-replier yourself).

I can't type "hamburgers" anymore without it autocorrecting to "HAMBUERGERRS!!!" I was hungry drunk ONE TIME, iPhone. LET IT GO. (Even if accidentally typing "Wanna get HAMBUERGERRS!!! for dinner" to my friends at 2PM feels like a small personal victory.)

Remembering to forgive the olds

I always feel like I'm in vague trouble whenever my dad texts me because he puts periods on the end of all of his sentences. One of his most recent texts was, "We have frozen meat loaf." Does that not sound vaguely menacing with a period on the end of it? But dads are dads, yo. Gen X was not ready for our punctuation paranoia. Sometimes we all have to take a breather and remember that we are ENORMOUS TECHNOLOGICALLY-DEPENDENT FREAKS.

More like this
Discord Might Be A Twitter Alternative — Here’s How To Use It
By Alexis Morillo
Dyson Is Dropping Futuristic, Air-Purifying Headphones
By Rachel Lapidos
This AI Filter Shows How You’d Look In Different Time Periods
By Alexis Morillo
65 Funny Dares You Can Send Your Friends Over Text
By Siena Gagliano
Get Even More From Bustle — Sign Up For The Newsletter