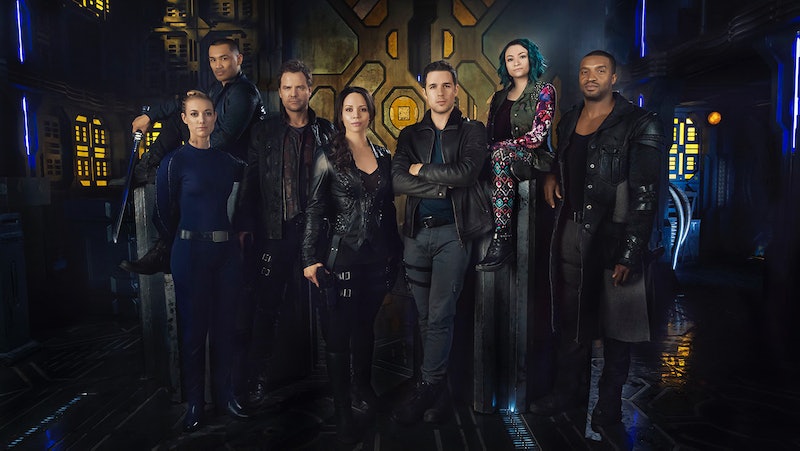 Well, the time has come, Dark Matter fans. The ending of one season, the departure of your favorite characters from the weekly TV schedule, the plot threads left hanging for you to ponder and theorize over while waiting for a another season. Yes, that's right, it's the Dark Matter season finale. On the bright side of things, as least fans of the Syfy series can be content in knowing Dark Matter was renewed for Season 3. But, that still leaves one very important question: When will Dark Matter return for Season 3.

Well, that's a little bit trickier since Syfy hasn't announced an official premiere date for Dark Matter Season 3 just yet. However, if we take a look back at when Seasons 1 and 2 debuted, I can say with confidence that the show will probably return in the summer of 2017. Season 1 premiered mid-June in 2015, and Season 2 debuted at the beginning of July 2016. So, I'd guess that Season 3 will kick off in either June or July of 2017, which means fans of the show have quite the wait ahead of them. But, don't worry, I have some TV suggestions that should tide you over until Dark Matter Season 3 hits.

Another of Syfy's summer shows is Killjoys, which follows three bounty hunters — in space — as they track their warrants and try to unravel a mystery within their galaxy. So, if you're a fan of Dark Matter and don't already watch Killjoys, I recommend trying out the first two seasons on Syfy.

Rather than a space-bound sci-fi thriller, TNT's Falling Skies takes place on Earth in the wake of a decimating alien attack, forcing the survivors to band together to use their knowledge to fight against the invaders. If you didn't catch this show for the five years it was on, Seasons 1 - 5 are available on Amazon — free with a Prime membership.

Set in a distant future wherein the human race has colonized much of our solar system, The Expanse begins as a simple murder mystery — which, of course, develops into a massive conspiracy about the inner workings of the futuristic society. So far there's only been one season, which you can catch on Syfy, but the network has already renewed it for Season 2.

Set within the franchise that spans multiple television series and a handful of films, Stargate Universe follows the crew of a ship that is both trying to explore worlds in a galaxy far away from the Milky Way and return home to Earth. If that catches your interested, the Stargate Universe's two seasons are available on Hulu — and once you finish them up, you can dive into other Stargate series!

A complex adventure in time travel, Continuum focuses on a detective from the future who travels back to our modern day in pursuit of radical criminals trying to change the past in order to alter the future. If following time travel storylines is your jam (and not a headache), you can catch all four seasons of Continuum on Netflix.

Technically, Helix ran for two seasons, but I can only really recommend Season 1 in good conscience since I never finished Season 2. However, Season 1 of Helix features a crew of scientists and military professionals sent by the CDC to a laboratory in the arctic where a mysterious disease has infected many of the facility's inhabitants. Part sci-fi drama, part horror thriller, Season 1 of Helix is definitely worth a watch (and I wish you good luck if you venture into Season 2); catch Helix on Netflix.

So, while Dark Matter fans may have it easy in that they don't need to wait for news of a Season 3 renewal, there's still the struggle of finding new series to pass the time while the show is on hiatus. These are some recommendations, but there are sure to be plenty other sci-fi shows to fill the void left by Dark Matter.