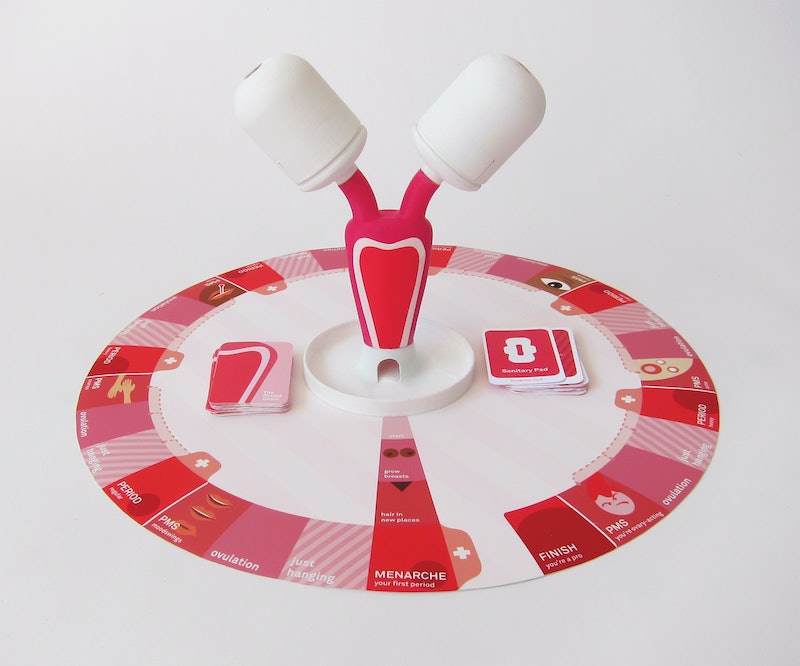 For something that is just about as natural as you can get, menstruation sure does get a bad rap. It's like the Lord Voldemort of bodily functions, whereby people hesitate even to speak of it out loud. But, head's up people, periods are totally normal and here to stay. It's about time we ditched the stigma, eh? Enter "The Period Game," a period-themed board game created by Daniela Gilsanz and Ryan Murphy that teaches kids (and adults, for that matter) about the menstrual cycle in a way that is a brilliant blend of whimsical and practical. "Our ultimate hope is that people can learn in a way that is equal parts fun and informative," Gilsanz tells Bustle via email about the pioneering project, "and that they feel comfortable to ask any questions they may have."

At the center of the game, both figuratively and literally, is a large, abstract representation of ovaries and a uterus. Every turn starts with a player turning one of the two ovaries, which releases a marble into the tray below. If the marble that shoots out of the tube is red, you're on your period. Woohoo! You get to proceed. If the marble is clear, welp, maybe you'll get lucky and start metaphorically menstruating on your next turn. As you move around the board, you must play "Protection," "Preparation," or "Specialty" cards, depending on where you land. Sometimes, you suffer a little leak — it happens to the best of us — and need to head to the nurse's office. No big! Take care of your business like a boss and get back in the game, because the first person around the board wins ... not to mention becomes a bona fide period pro.

Designed primarily for the 9- to 11-year-old female demographic, "The Period Game" was originally conceptualized by Gilsanz and Murphy as part of a class project at the Rhode Island School of Design in 2014. "The whole class was tasked to make a game about the body and, for us, it was important that it went beyond just book learning and was something where the knowledge could be regularly applied to life. The idea of menstruation was something that seemed very engaging and fun to tackle. We also liked the idea of trying to destigmatize menstruation as much and as early as possible," Gilsanz says. "When we first pitched it to our class, there was definitely some discomfort, which we hadn't expected from 20-somethings at art school. To us, this really highlighted the stigma and reinforced why we had to do it. Once we started playing the game, people really openly came around and were much more willing to talk about periods, which was a great thing to see."

It's hard to grasp how something as natural — and important, no less — as menstruation can still be so stigmatized, yeah? But as Gilsanz and Murphy's experience (along with the experience of young, menstruating people, past and present, trying to quietly figure this stuff out so as not to offend anyone), period talk is still taboo. This makes it that much more difficult for kids to talk to their parents and peers about menstruation, perpetuating the cycle of stigmatization. It's about time someone came along with something as innovative and informative as "The Period Game." Bonus? The board game can also teach those who don't menstruate an important lesson, too — namely that there is nothing gross or shameful about having or talking about periods.

I, for one, would like to go ahead and cast my vote that this game immediately be adopted into Health and/or Sex Ed classes everywhere. As the mother of two kids, I'd love to see Gilsanz and Murphy's project actualized so that kids can learn about their period in a way that builds their self-esteem and body positivity — all while having fun and fostering important dialogue with their friends and family members. "The game is designed so that by learning the rules, you've already learned about your body. Plus, by playing the game, you have to say words like 'tampon' — and, once you say them for the game, it becomes easier to say them in conversation and class. In playing with young girls, we got a lot of great feedback and really saw them understanding these new concepts. Also, a little healthy competition really encouraged everyone to learn more and overcome their awkwardness," Gilsanz explains.

If you're wondering where you can pick up "The Period Game" for the kids in your life, you'll have to wait until the project moves out of the prototype phase. But, hey, Gilsanz and Murphy are currently looking for partners! If you're looking for a solid investment opportunity that will enrich the lives of countless people, you just found it.

Images: Courtesy of The Period Game