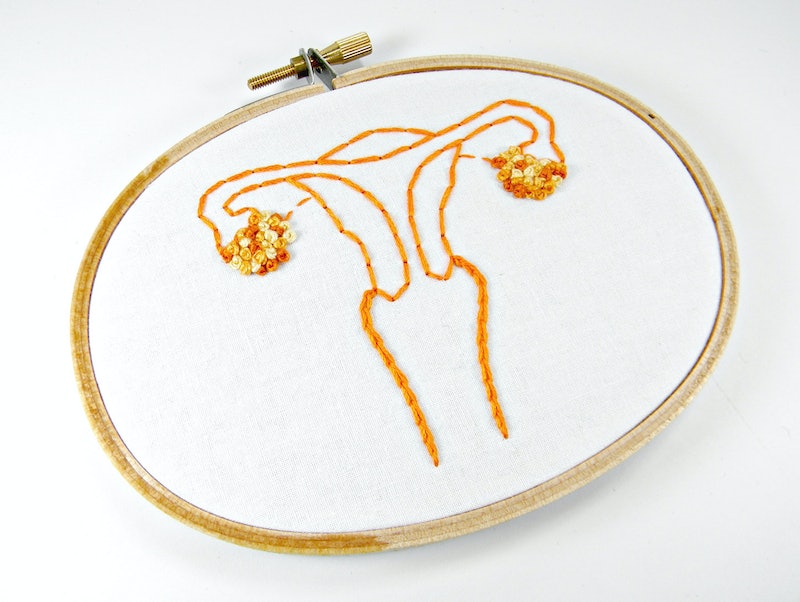 Anyone who has ever menstruated knows that this completely natural, necessary, and inevitable bodily process comes with a load of societally-induced fear and shame. Despite the fact that many women spend up to 10 days a month dealing with period-related changes to their body, and we experience this monthly process for decades of our lives, we are still expected to keep our periods clean, quiet, and out of sight. We're so conditioned to feel embarrassed and ashamed of our periods that most women (myself included) have at some point felt uncomfortable when we're buying tampons or pads, and felt even more mortified at the thought of bleeding through our pants in a public place.

But why should talking about periods be so taboo? The act of menstruating couldn't be more natural — and with all the health risks, pain, and environmental issues that result from a lack of menstrual education, shouldn't we be working to make period talk more normal? Menstrual activists agree that we should definitely be trying to, even if we don't see results overnight, and they also agree that there are ways we can normalize talk around periods in our period-phobic society.

If you're wondering how you can make talking about your period — or just periods in general — less embarrassing and weird, then read on. Here are four ways we can work to normalize talking about periods — because we should be able to talk about how our bodies work without feeling ashamed.

This is certainly easier said than done, but the only way we're going to make talking about periods less uncommon is if we talk about them more openly and more often. I'm not suggesting that the details of your menstrual cycle should be how you open your next first date conversation or anything, but whether it's with your friends, family, partner, or co-workers, don't shy away from discussing your period or periods in general.

Period shaming is everywhere, and it's never OK. Take Instagram's removal of Rupi Kaur's photo of a woman whose menstrual blood had seeped through her pants, or the criticism of Kiran Gandhi for free-bleeding while running the London marathon last April. While these incidents are totally uncalled for, period shaming in non-western countries is often far worse. In fact, talking about periods is so taboo in places such as India that it's become an incredibly dangerous place to be if you're a woman who menstruates.

In parts of India, it's not uncommon for families to encourage their girls to stay home from school and get married rather than deal with menstruating in schools that lack decent bathrooms. Women are treated as if they are spoiled or defiled during their periods, and since talking about periods is so unheard of there, menstrual education is lacking to the point of hazard. Girls are often too embarrassed to even ask their moms for clean cloths and end up getting serious infections because of it. One such case actually lead to a 13 year old having to undergo surgery to remove her uterus, a procedure which would forever "taint" her as a barren woman.

If we start talking about how period shaming is more than just offensive and emotionally upsetting, and raise awareness about just how physically harmful it really is, then even those who are uncomfortable talking about periods will be challenged to see why normalizing talk around periods (and donating to organizations that help these women) is so important.

3. Consider This A Feminist Issue

In an interview about her book, "New Blood: Third-Wave Feminism and the Politics of Menstruation" Chris Bobel talks about the need for menstrual activism and the negative way we (women and men) as a society are accustomed to talking about periods. She addresses the fact that girls are trained to hate their periods before they even have one, and men and women alike are conditioned to make jokes about raging PMS. In fact, sometimes it seems the only "OK" way to talk about periods is by making PMS jokes or going on and on about how horrible and painful periods are.

Of course, periods are painful for most women, and it's good to talk about that too, but menstrual activists believe speaking about periods in a solely negative light only promotes period shame. If we start talking about periods in more positive ways, (like how amazing and powerful it is that our bodies work for us and run their own, complicated, amazing processes to keep us healthy) instead of only talking about all the ways they suck, then it's more likely periods will eventually become a more positive and normal topic to discuss.

4. Support Others Who Are Working To Normalize Period Talk

Even if you're unsure how you personally can normalize period talk, or you're still a little uncomfortable with speaking out about periods, (even though you really do want menstruation to be less off-limits in regular conversation) you can always start by supporting those folks who are actively and publicly trying to make periods a less taboo topic of discussion.

Whether you choose to retweet the heck out of hashtag #LiveTweetYourPeriod, or read and share zines like Chella Quint's " Adventures In Menstruating, " or join (and invite friends to join) Facebook groups like, "Normalize The Period," there are plenty of ways you can work to support normalizing period talk, even if you're not ready to claim the title of menstrual activist just yet. Though really, what are you waiting for? Those tampon earrings would look cute on you.