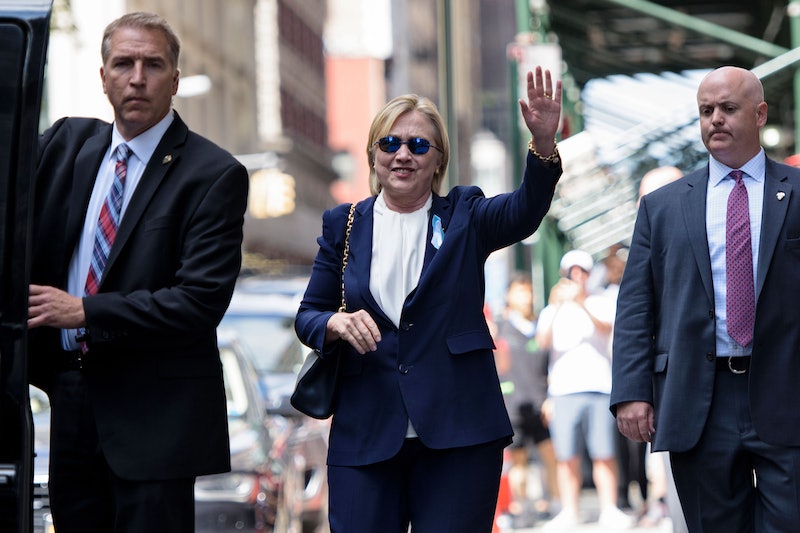 After a weekend of fervent speculation about the health of Democratic nominee Hillary Clinton, leading into the Clinton campaign disclosing the Democratic nominee's pneumonia diagnosis, and her opponent Donald Trump sitting down for an interview about his health with TV doctor Mehmet Oz, matters of candidate health have loomed large in the news cycle lately. And now, the Clinton campaign has put out some new details — if you're curious what the new Clinton medical info says, most of it has to do with the nature of her pneumonia diagnosis, along with a recap of much of the same medical history her previous doctor's note articulated.

Basically, the bulk of the new information relates strictly to the illness that landed her at her Chappaqua, New York home for a few days — a case of pneumonia that she was diagnosed with on Friday, Sept. 9. The pneumonia, combined with dehydration according to her campaign, led to a bout of weakness and unsteadiness that forced her to leave the 9/11 memorial during her visit for the 15th anniversary of the attacks.

So, what's the story? According to the new information released by the Clinton camp on Wednesday afternoon, her case of pneumonia is mild and non-contagious. If you want to read the statement from Clinton's personal physician Dr. Lisa Bardack, you can find the full letter here.

Bardack dives into some details about Clinton's medical history and the medications she takes, although much of it is the same as the letter she wrote for Clinton in July 2015. Here are some of the main takeaways.

Here's how Bardack describes Clinton's medication regimen, which include anti-coagulants — Clinton has suffered from three blood clots throughout her life, most recently following her widely publicized concussion in 2012.

Mrs. Clinton’s current medications include Armor Thyroid, Coumadin dosed as directed, Levaquin (for a total ten days), Clarinex, as well as B12 as needed. After consultation with her hematologist, it was decided again not to change her anticoagulation to a newer agent. Her recent testing, all of which was done within the past month, has been normal. She remains up to date on all of her immunizations, including Prevnar and Pneumovax. Her Coumadin levels have been adjusted as needed according to regular lab testing. She had a normal mammogram and breast ultrasound. She receives routine dental care. Her thyroid blood tests are within normal limits. Of note, she has remained stable for many years on Armor thyroid to treat her hypothyroidism (a low T3 level). Her laboratory testing (vitamin D, CBC, fasting blood glucose, comprehensive metabolic panel, hemoglobin A1-C, vitamin B12) was normal, including cholesterol of 189, LDL of 103, HDL of 56 and triglycerides of 159. Her vital signs showed blood pressure of 100/70, heart rate of 70, respiratory rate of 18, temperature of 97.8 and pulse-oximetry of 99%.

In summation, Bardack classified Clinton's physical exams and lab work as "normal," and again affirmed that she's physically ready to be Commander-in-Chief, specifically citing her "excellent mental condition" and calling her "fit to serve as President of the United States." Trump, for the record, has yet to release any medical information as comprehensive or detailed as this. Rather, he's released a one-page, hyperbole-riddled doctor's note with virtually no concrete medical information, and filmed an interview discussing his health with Dr. Oz on Wednesday morning.