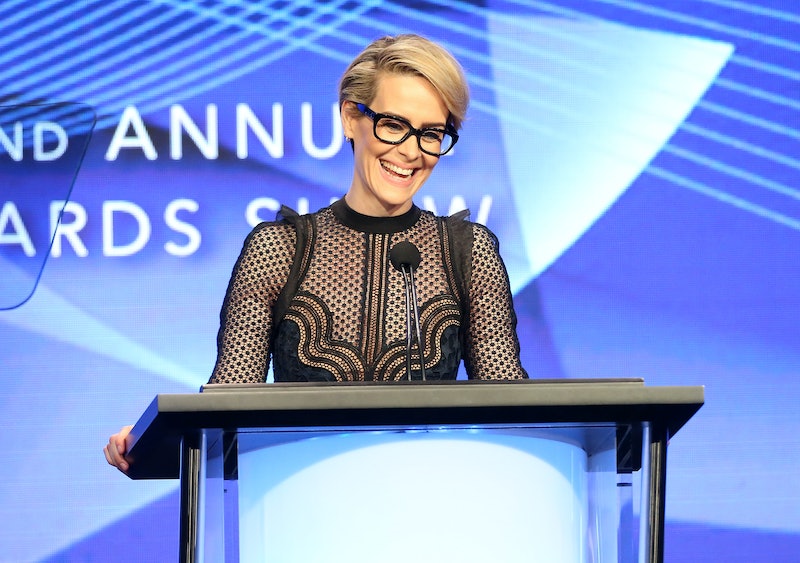 Sarah Paulson is quickly becoming the Susan Lucci of the primetime television. With seven Emmy nominations under her belt and not a single win, the race to the 2016 Emmy season, for me, is like one long waiting game to see whether or not Paulson wins it. So when the actress announced that she would be taking Marcia Clark as her date to the 2016 Emmys, I thought, “This has to be the year. With a date like that, there isn’t a poetic a time for her to win.”

Honestly, I can’t think of a better date for Paulson to bring (with the exception of her partner and long-time girlfriend Holland Taylor, of course), especially since Paulson’s role as Marcia Clark is what got her nominated for an Emmy in the first place. But even with that much-talked-about role, Paulson’s chances of winning this year are even better. Paulson nabbed two Emmy nominations this year: One for her role as Marcia Clark in The People v. O.J. Simpson: American Crime Story and one for her role in American Horror Story: Hotel. Both roles showed Paulson at her finest, switching back and forth between two wildly disparate characters to get both shows made at the same time. For that alone Paulson deserves to win the Emmy, but it is definitely her work as Marcia Clark that has won her the most notoriety.

And now, with Clark by her side, it would be even more amazing if she won it. I mean, just image the photo ops of that moment! Plus, the win would be more personal for Paulson than ever before. In a recent interview with Variety, Paulson opened up about how playing Clark changed her in such a dramatic way. She said that it taught her how to trust herself more, just as Clark learned to do after the dramatic trial she was apart of.

Paulson told Variety exclusively that “There was something about playing Marcia that was so so close to my heart.” And what better way to pay homage to the woman who inspired the role that changed the way she thinks of herself than the bring her to the awards show as her date. Especially if she wins the Emmy for her role as Clark, it would only be right to have the woman who inspired her role and her own changed opinion of herself right by her side.