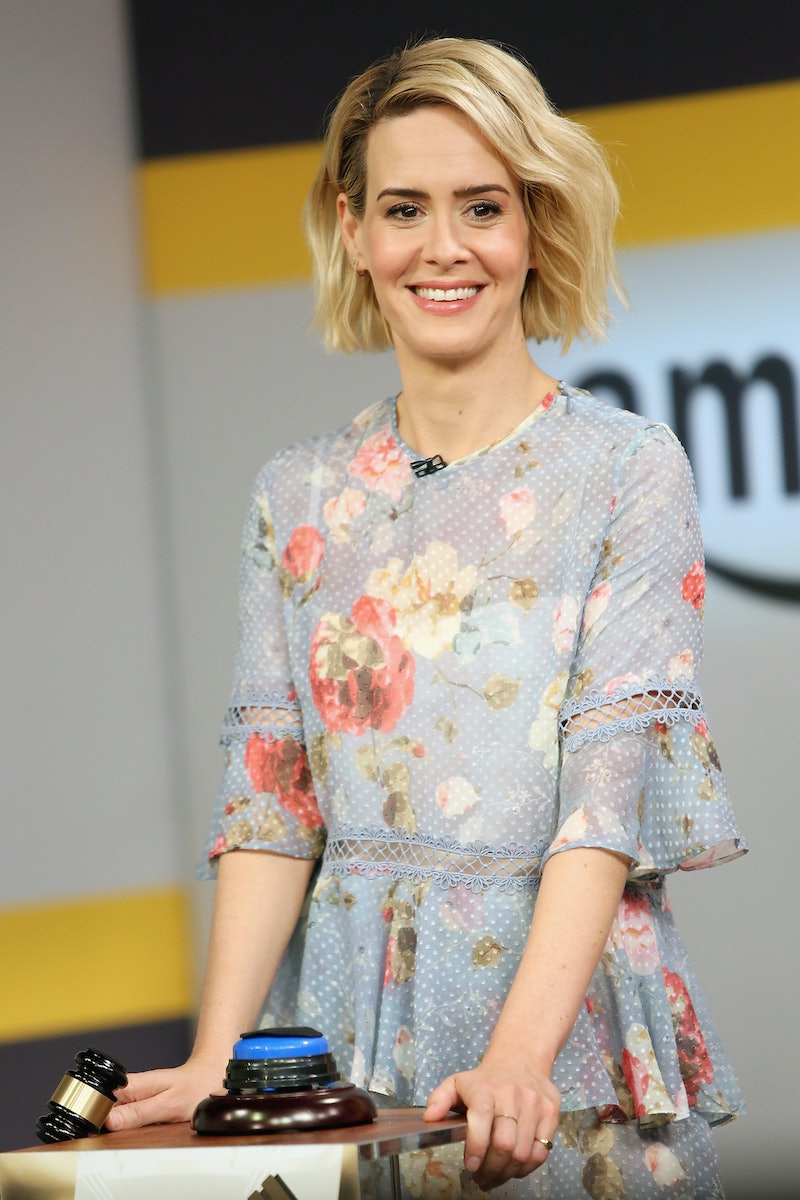 When it was revealed back in December 2015 that actor Sarah Paulson was dating Holland Taylor, the news almost broke the Internet. And now, in an interview with The New York Times about her portrayal as Marcia Clark in The People v. O.J. Simpson: American Crime Story, Paulson has spoken out about her relationship with Taylor, revealing just how much she really loves her. What makes the Paulson-Taylor romance so gossip-worthy is that Taylor is 32 years older than Paulson. With an outpouring of support for this unorthodox relationship in the media, the acceptance of Paulson dating Holland is not only a credit to the public, but also a credit to the progressive actors themselves — specifically Paulson. Her uncompromising personal life is reflected in the the courageous choices she has made throughout her career.

From Ryan Murphy TV series like American Horror Story and American Crime Story to Oscar-nominated films like 12 Years a Slave and Carol, the once Lifetime-movie starring Paulson has truly made a name for herself. While still a skilled character actor, Paulson has stepped into the leading roles for a number of unique projects that don't follow any sort of code. Love-obsessed heroine addict? Check. Slave owner's wife? Check. The older sister of a woman who just escaped a cult? Check. Conjoined twins in a freak show in the 1950s? Check.

While many of Paulson's extreme roles are courtesy of Murphy and the American Horror Story series, that doesn't mean Paulson shouldn't receive ample praise for her gutsy role choices and sheer talent. As Murphy told The Hollywood Reporter about her dual roles as the conjoined twins in American Horror Story: Freak Show, "It's absolutely the most challenging thing I've ever seen any actor do ever. She really went for it. It's thrilling to see somebody embrace something so hard."

As for Paulson's life imitating art, in Carol, Paulson played Abby — a friend and former lover to Cate Blanchett's title character. And in American Horror Story: Asylum, her journalist character Lana Winters was also a lesbian. In both of those projects, her characters being homosexual was extremely taboo since Carol takes place in the 1950s and Asylum began in the 1960s. These fearless role choices by Paulson seem to mirror her real life as her relationship with Holland is far from the conventional, which Paulson is the first to admit.

Responding to the media's reaction to her relationship with Holland, Paulson told The New York Times, "My choices in romantic partners have not been conventional, and therefore the idea that it is 'other' makes it compelling." Another "compelling" feature of Paulson's personal life is that she avoids labeling her sexuality — dating both women and men. As The New York Times reported, before dating Taylor, she most notably dated actor and playwright Tracy Letts (nine years her senior) and actor Cherry Jones (18 years her senior) for seven years. Paulson did acknowledge the fact that she only seriously dates people older than herself by saying, "I can’t say it any other way than there’s a poignancy to it, and a heightened sense of time and the value."

Now with Taylor for a little over a year, Paulson's career and personal life have grown to be a fascination with the public. However, that won't stop Paulson from making life decisions that are true to herself.

"If my life choices had to be predicated based on what was expected of me from a community on either side, that's going to make me feel really straitjacketed, and I don't want to feel that," she said to The New York Times. "What I can say absolutely is that I am in love, and that person happens to be Holland Taylor."

As her career continues to become more noteworthy, I love that Paulson's nontraditional relationship entering the spotlight hasn't made her flinch. Although I can't claim to be as lucky as to know the actor personally, her strong roles and equally strong sense of self make Paulson an unintentional role model — which in my opinion, can sometimes be the best kind.

More like this
Jesse Tyler Ferguson Had A Funny Run-In With A Fellow ‘Modern Family’ Alum
By Grace Wehniainen
'Stranger Things' Cast Thinks It's "OK Not To Label" Will Byers' Sexuality
By Alyssa Lapid
20 Photos Of "Beefy" Jeremy Allen White To Tempt You To Watch 'The Bear'
By Radhika Menon
What Is the Net Worth Of Each 'Stranger Things' Season 4 Cast Member?
By Hugh McIntyre
Get Even More From Bustle — Sign Up For The Newsletter