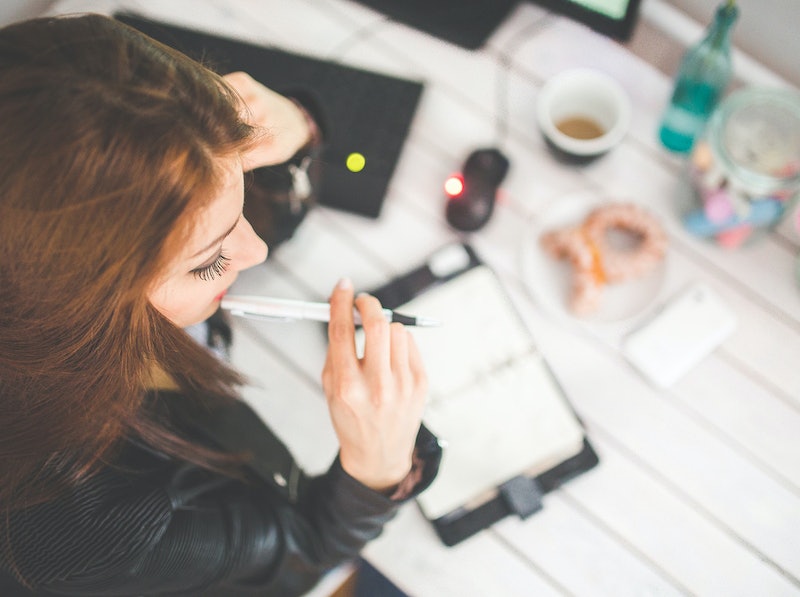 Thanks to social media, it's easier than ever to compare yourself — and everything about your life — to everyone you've ever met. Every day, you're inundated with humble brag statuses and Snapchat stories carefully curated to show only the best and funniest moments of someone's day. It's natural to end up comparing ourselves to others, especially our best friends, but that doesn't mean it isn't harmful. This is especially true when it comes to important aspects of our lives, and even more so with our jobs. Comparing your career to your friends' careers is not only an easy way to become more jealous and competitive, but it could also potentially harm your own work life, which is, I'm guessing, exactly what you don't want.

Listen, I get it — it's tough to not pay attention to what your friends are doing with their jobs. Reading or hearing about about someone's raise, promotion, and cool work perks can make you feel like you're doing something wrong. Watching a friend nail their first job interview and then get hired while you've gone on 15 interviews and haven't even gotten an email back is a recipe for misery. Seeing someone move up on the career ladder while you're stuck in the same position is hard. Sitting in a dim, cold office while a friend travels across the country for work feels like a sick joke. At the end of the day, it's easier to focus on what they have that you don't than to try and be positive.

After college, it took me almost a full year to get hired for a full-time position. During that time period, I watched friends find jobs in their field of choice before me, including a friend who got hired for a job I would have killed for. To be honest, it was excruciating. I had to pretend to be happy for everyone when meanwhile, I was miserable for myself. Even now, I feel jealous of other peoples' jobs all the time. We all need a reminder of why we should stop comparing ourselves to others sometimes, so here are a few reasons why comparing your career to your friends' careers is harmful. Think about them the next time you start to feel jealous!

1. Their Job Is Not Relevant To Yours

Unless you're comparing yourself to someone in your company who has the same exact role as you, with the same exact level of experience, judging your job based on a friend's job doesn't really make sense. Here's what I mean: say a friend of yours gets a job in a different field than yours, and is a level lower than you are in your field. Then, six months later, she nails a huge promotion and starts making a lot more money than you. That might make you feel crappy, which is normal, but it shouldn't, because you guys are doing two different jobs. What she's doing at work has no effect on what you're doing. At the end of the day, you're making yourself miserable for something that doesn't even really make sense.

2. You Don't Know What Goes On Behind Closed Doors

Maybe one of your friends has a pretty cool job, and they're always posting about their work perks and fun opportunities. It might be enough to make you green with jealousy, but it shouldn't be — things might look perfect, but you never really know what's going on at her job that she isn't talking about.

Here's a personal example: I have a job that allows me to do a lot of fun things, and I post about those things all the time. My friends are constantly telling me I have the best job in the world. Cool! Except, while I do have a great job, it isn't great all the time. Just like any other career out there, there are plenty of things that go on during my work day that make me feel anxious and intimidated. I just don't post about those things because, one, I don't want to get fired... and two, a photo of the tough part of my job isn't nearly as interesting as a photo of the fun part. See what I mean? You could be comparing yourself to a career that isn't as great as it looks. That's a waste of negative energy!

3. It Leads To Unnecessary Bitterness

Even if you don't want to be mad at your friend, and even if you logically know they did nothing wrong, constantly feeling jealous of their career can lead to bitterness and anger on your part. The bad feelings stewing inside have to come out in some way, leading to passive aggressive behavior and silly arguments. Or, if you're not the confrontational type, you might avoid talking to or hanging out with your friend so you don't have to hear them talk about their job. That sounds crazy, but it happens. Do you really want a friendship to end or turn sour because their job seems cooler than yours? I doubt it.

4. It Lowers Your Confidence

Constantly telling yourself that your friend's job is so much better than yours not only makes you feel crappy about your job, it also makes you feel bad about your personal choices and your work ethic. This kind of thinking can lower your confidence and cause you to second guess yourself and everything you're doing. This tends to feel pretty awful, but it can also mess with your career. Confidence is an essential part of doing well at work and of moving up the ladder, so if you don't have any of it, you're going to have some problems. It's hard to succeed when you spend a lot of time thinking about how much better your friends have it.

5. It Distracts You From Your Work

Aside from causing you to second guess every decision you've ever made, comparing your career to your friends' careers distracts you from your work. Instead of trying to focus on the positive aspects of your job or paying attention to your to-do list, you're wasting time thinking about the cool thing your friend is doing at work right that very moment. Great for her — not so great for you when you have to tell your boss you didn't finish your assignment on time. Don't let jealousy get in the way of your own position.

In small doses, a competitive streak can motivate you to do better and to work harder, two qualities that can lead to more success. But too much competition and comparison does the opposite. It makes you feel bad about yourself. If you want your career to become more exciting or promising, or you want to find a job, or you want to land your dream job, you need to be focused on you. Focusing on others is never going to help.

7. It Leads To An Overall More Negative Outlook On Life

You know what happens when you start reminding yourself of all the awesome places your one friend has traveled for work while you've been in a cubicle for months? You start to think about all of the other things that have gone wrong in your life lately. This leads to a "woe is me" attitude, which can lead to more serious issues like depression, anxiety, and really bad stress. Being very negative about one thing often makes you feel very negative about other things. So, before you know it, you aren't just comparing your career to your friends' careers — you're also comparing your love life, your social life, your personal goals... the list could be endless. As it gets worse, it becomes a harder habit to break, so best to tackle it now!

Look, at the end of the day, this can be summed up in one sentence: Comparing your job to the jobs of others is a waste of time. It just is! It's not doing you any good, it could be hurting your own career, and it might even hurt your friendship. It's tough to find anything good about doing it, and that alone should be a reason that you stop.