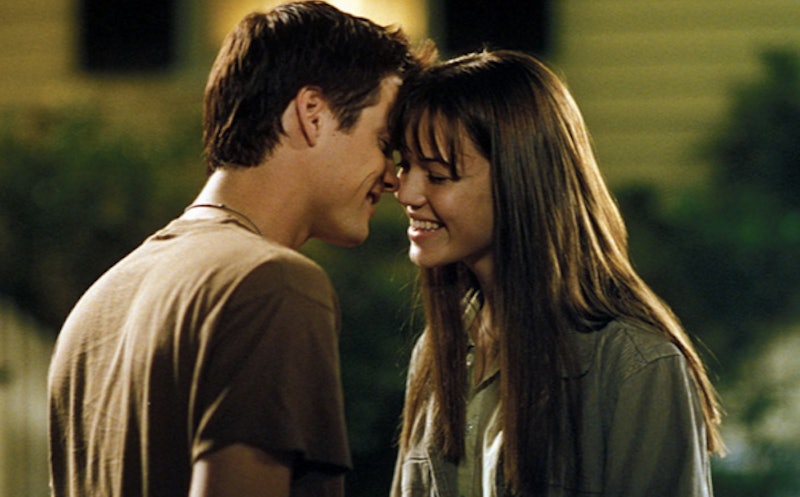 Hold on to your hearts, guys, because this just might break it. Mandy Moore has talked about the possibility of A Walk To Remember reunion. While promoting her new show This Is Us, the actress and singer mentioned that she'd recently gotten back in touch with Shane West, and that they both like the idea of reuniting the cast and crew. If, like me, you spent many hours crying over the movie as a teenager, you're probably filled with mixed emotions about the possibility of a reunion for the film cast of one of Nicholas Sparks' earliest, and best, stories. I can't help but wonder what if A Walk To Remember ended differently, and everyone's favorite tragic ship got the happy ending they deserved?

At the PaleyFestival Fall TV Preview of This Is Us, Moore told PEOPLE, "I feel like we should get together with as much of the cast that is around and see if we can finagle a social media picture or something like that." I personally can't think of anything better than seeing Landon and Jamie back together again, even if we'd all need a little creative license to imagine what the world would be like if the film had been less tear-inducing. Clearly, if Moore's character Jamie had never succumbed to her illness, the pair would still be as in love as ever, right?

If we're being realistic, a sequel is never actually going to happen. But the chemistry between West and Moore was so insanely real, it's easy to imagine that the on-screen couple would still be together in any flash forward. If Jamie hadn't died, she and Landon would be married and completely in love. At the end of A Walk To Remember , Landon had famously overhauled his entire life by finishing college, getting accepted to medical school, and winning the approval of Jamie's strict father. In a sequel, in the alternate universe I have created in which Jamie is still alive, Landon would be a doctor in North Carolina where the pair met and fell in love.

Jamie would still be following her passions, such as astronomy and the performing arts, but she'd also be helping others explore their talents. It's easy to imagine Jamie as a drama teacher, or teaching performance to college students or in the community. Her career would be every bit as fulfilling as her romance with Landon, and because she's a total sweetheart, she'd be cooking dinners for their friends on the regular, and looking after her father.

Perhaps what's most interesting is the fact that Sparks's original novel left Jamie's fate ambiguous. In an interview on his official website, Sparks said in 2008, "Part of me thought that if I killed off another major character, my readers would never forgive me." While he's absolutely right about that, and we're still not over it, like, at all, it's his discussion of Jamie's illness that is most enlightening and exciting. Sparks said,

As to whether she actually lived or died, it's ambiguous and purposely meant to be that way. If you wanted Jamie to live, she lived. If you knew that Jamie would die, she died. As for me... I thought there was a good chance that Jamie lived.

While the movie opted for a more definitive ending, it's interesting to hear the author discuss the possibility that one of his most tragic characters didn't die after all. If only we could go back in time and suggest that the filmmakers make the movie less miserable.

Sparks' revelation, coupled with Moore's interview about a possible reunion, has only made me wish that the movie version of A Walk To Remember had ended differently. I would love the chance to see Landon and Jamie together once more. As Moore told PEOPLE, "I just reached out to Shane. We hadn't talked in years... We're going to try and get together one of these days." Even if a sequel is out of the question, it sounds as though we might be seeing a photo of the pair together again very soon, and that's exciting.