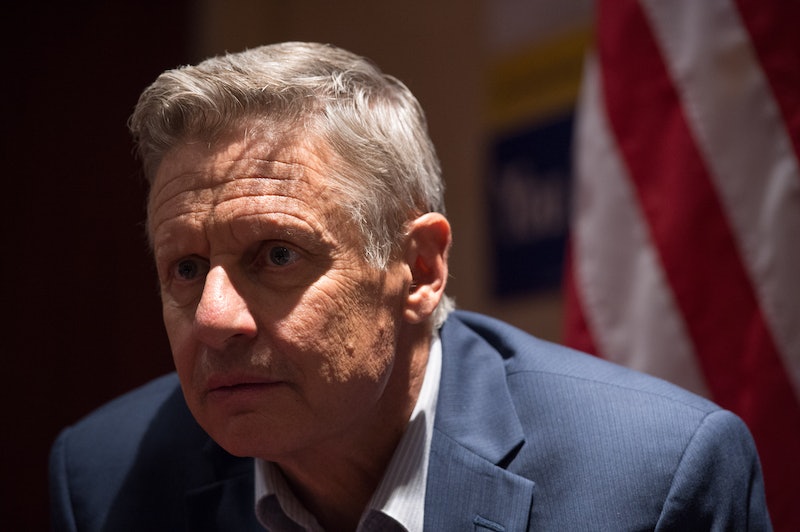 After criticizing Donald Trump throughout the primary season, New Hampshire's Union Leader newspaper endorsed Gary Johnson instead. This is a big deal because it's the first time in 100 years the paper has not endorsed the Republican presidential nominee. In addition to Johnson, the paper endorsed the entire Libertarian ticket in the state, including in the race for governor.

The searing editorial was signed by the paper's publisher Joseph McQuaid. It went live on the paper's website Sept. 14 and was the lead story on the front page the next day with the headline: "A better choice for President (No need to hold your nose)." The words are pretty harsh:

Voters leaning toward Trump are understandably fed up with the status quo, of which Clinton is a prime example. But they kid themselves if they think Trump isn’t pretty much a part of that status quo as well, or that he is in any way qualified to competently lead this nation.The man is a liar, a bully, a buffoon. He denigrates any individual or group that displeases him. He has dishonored military veterans and their families, made fun of the physically frail, and changed political views almost as often as he has changed wives.

Not much is said about Johnson or his running mate, former Massachusetts Gov. Bill Weld, except that their "records" as Republican governors of "politically divided" states is a good sign. (Johnson was the governor of New Mexico.) It's clear that Trump is what has pushed the Libertarian endorsement. "They would be worth considering under many circumstances. In today’s dark times, they are a bright light of hope and reason," McQuaid wrote.

If those words about Trump weren't harsh enough, the argument continued in the Opinion section with another editorial, unsigned and written by the editorial board. They argued that electing Johnson could rebalance power between Congress and the president. "Gary Johnson would be the first President in modern memory to limit the scope of both the federal government, and his own power as President. Neither Hillary Clinton nor Donald Trump show any signs of such political humility," the editorial stated.

This could have a big impact in the state and potentially help Clinton. Right now, in a two-way race, Clinton is barely holding on to a lead in the latest poll. But when you consider a four-way race in the state with both Johnson and the Green Party candidate Jill Stein included, Clinton's lead grows a bit. In the latest four-way poll through Sept. 8, Clinton has just over 39 percent of the vote and Trump just over 37 percent. If some of those Trump voters now throw their support behind Johnson, it could give the Clinton campaign a comfortable margin.

That could be welcome news for her campaign. After a difficult week with a lot of pneumonia coverage, Clinton's odds of winning are at the lowest point since Trump's post-convention bump, according to FiveThirtyEight. It's too soon to worry, but keeping New Hampshire in Clinton's column for the Electoral College is surely part of her team's plan for victory.