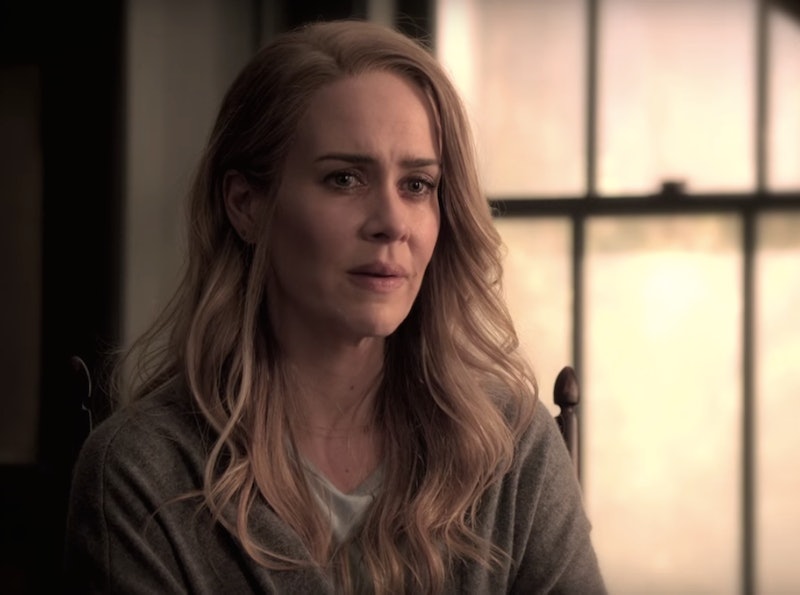 What is clear from the American Horror Story S eason 6 premiere is that Ryan Murphy still has a few tricks up his sleeve. And, honestly, that's about it. The lead-up to this premiere was filled with fake teasers and red herrings that were meant to keep viewers guessing about what this season is about. The theories for the theme of AHS Season 6 ranged from a Charles Manson to the Roanoke colony in North Carolina that mysteriously disappeared. This season will be about Roanoke, but it doesn't seem to be based on those events. Instead this new season, dubbed My Roanoke Nightmare, is based on an interracial couple who buys a house in the city and the horror that ensues.

It's filmed like a docu-drama, not unlike an episode of Unsolved Mysteries or Dateline, with Lily Rabe and André Holland playing the real life couple of Shelby and Matt Miller re-telling the events of their nightmare in real time, while Sarah Paulson and Cuba Gooding, Jr. play the dramatized-for-TV version of the couple, reenacting the events of their ordeal, which include a hail storm of teeth, a sinister hot tub soak and a torch carrying mob. And that folks is really as much as you get in the premiere.

Luckily, Murphy dropped a longer trailer for the season that gives a few more clues about what fans can expect from this season. While none of these can be confirmed or denied, it does get us at least a few steps closer to understanding Murphy's vision for this new season. And, of course, leaving everyone with even more questions.

1. There's Going To Be Some Devil Worshipping

In perhaps a nod to Coven, this season is going to include some magic that isn't being used for good. The season premiere showed us an actual scalping, and, in this new trailer, Paulson's Shelby lets everyone know that there's been a human sacrifice. Why this is happening is now the big question of this season — along with all the others.

Like that Murder House of the first season, here AHS is once again dealing with a house with a creepy past. It's also a house that seems to have a mind of its own — or, at least, an agenda. In the premiere, it was playing tricks on Paulson, and it's safe to say that, as the season goes on, it's probably going to up the stakes. But why?

3. There Are Some Serious Blair Witch Vibes

From those totem-like figures in the woods in the season premiere to the man talking into his camera about there being something in the woods and in the house that is trying to kill him, there are some definite connections to the Blair Witch Project. Even the AHS Season 6 tree logo and those twig dolls that are seen strewn throughout the house in the premiere look a lot like the image seen on the poster for the Blair Witch Project's 2016 sequel Blair Witch. But who is he and where did this video come from? And, most importantly, what is trying to kill him? All things that are yet to be revealed.

4. That Little Girl Is Clearly A Key To Something

We know that Matt's sister Lee (Angela Bassett) doesn't have custody of her daughter, Flora, but yet we see her in the house. Matt calls it kidnapping, while Lee believes it's her right. Clearly, Flora is an important key to what's going on here. What Flora is the key to though, well, you guessed it: we're not quite sure yet.

5. That Secret Door Is Hiding Something

In this new trailer, there's a brief shot of a small black door that Flora's staring at. Lee closes it, but it's clear this door is foreshadowing something. At some point, we're going to have to find out where it leads, or who is using it. It's safe to say that it's probably not going to be some friendly houseguest.

One thing is very clear from the trailer: Kathy Bates is not to be trifled with. She seems to be the ultimate baddie this season. Perhaps a Roanoke colony survivor back to take her home? Or just a overzealous relative who wants to keep the colony alive? Either way, she seems like a woman who knows what she wants, and she wants that house. "I protect this place to save the colony," she says. But from what? Now that is the question.

7. "Her" Is Definitely Someone You Don't Want To See

"Matt?" Paulson yells. "Do you see her?" The two are then seen staring out their window in broad daylight full of fright. We see nothing, but it's clear, whoever this "her" is, she's likely someone you don't want to see. This question about "her" feels like a warning. Especially since Matt lets the viewer know right after this he didn't think things could get any worse, and then they did.

How bad will things get? That's something that you'll have to wait and see. But it definitely seems like this is one of those seasons of American Horror Story where Reddit is going to be crazy trying to figure out what the heck is going on here. After watching this extended trailer, the only thing you can be sure of is that the show is going to try and be creepier than ever before.

More like this
At 28, Lesley Manville Was Acting, Picketing, & Singing Kate Bush Songs
By Olivia-Anne Cleary
What’s New On Netflix: 'Never Have I Ever' & 'Indian Matchmaking' Return
By Arya Roshanian
On 'Industry,' Marisa Abela Takes Control
By Morgan Leigh Davies
'A League Of Their Own' Star Abbi Jacobson Is Engaged To Jodi Balfour
By Jake Viswanath
Get Even More From Bustle — Sign Up For The Newsletter