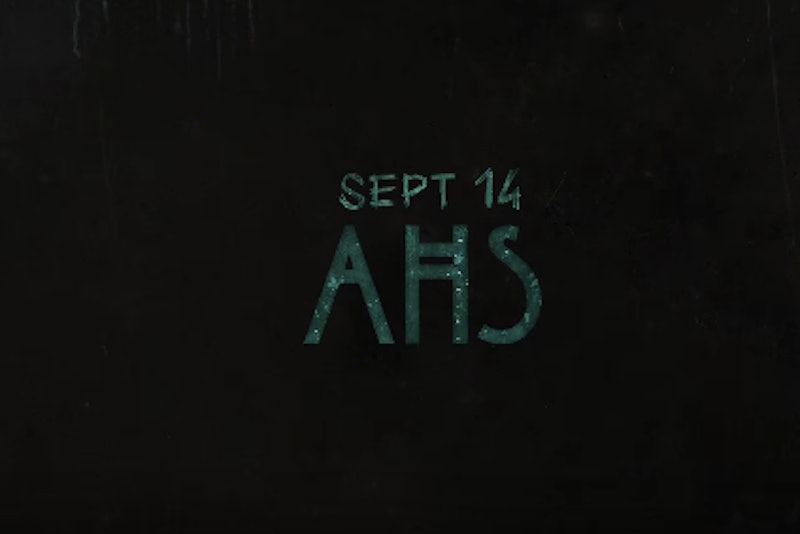 The hour is almost upon us: Soon, we will finally find out what the American Horror Story Season 6 theme is once and for all. But, considering we have a few hours more until that's revealed, there's still time to work in one last theorizing sesh — because if you're anything like me, I know it's all you're gonna be thinking about until the premiere on Wednesday night. So, to start: Right now, the theory in the lead is that AHS Season 6 will be titled "The Mist," because both Rotten Tomatoes and TV Guide listed the series recently as, well, American Horror Story: The Mist. Backing this theory up is the fact that, in a statement during the Television Critics Association press tour, FX CEO John Landgraf confirmed one of the many teasers fans have see is actually the real deal — and FX recently released a promo that depicted mist surrounding a crib. Spooky.

Of course, considering Ryan Murphy and FX decided to keep everything about the season — the title, the plot, everything — completely under wraps, we're not going to find out the answer for sure until the premiere. However, that doesn't mean that, while we're waiting, we can't just wonder a bit more if the title will be The Mist, or something else what's previously been theorized. I mean, there were a lot of teasers — at this point, it could be anything! So, in honor of the series, here's roundup of some of the most legit-seeming theories:

Could the early "hints" from Rotten Tomatoes and TV Guide just be red herrings, or the actual theme of the season? Given how prevalent this theory is, I think there's a 70 percent chance that Season 6 is going to be very misty indeed.

2. The Lost Colony Of Roanoke

Based on some suspicious photos published by TMZ that were allegedly from the AHS Season 6 set and appeared very colonial, fans began to theorize this season could be about the whole colony of settlers in the 1600s who mysteriously disappeared without a trace. Considering there's potential photo evidence, I'm going to say 40 percent for this one.

Glamour reported a theory in September that suggested since Murphy originally wanted to make the show's third season about the infamous 1960s cult leader Manson, this could be Season 6 — and this theory is backed up by a creepy baby bassinet in one of the promos that has the word "pig" visible atop. Of course, this links back to Manson through the murder of Sharon Tate his followers carried out in 1969: When her body was found, the word "PIG" was written on the front door in Tate's blood. This could totally be a thing because it's so subtle. I'm giving it a 60 percent chance.

4. A School Of Some Sort

TMZ also leaked photos allegedly from the set that depicted a rickety looking school, so it's totally possible that a school could be the location. It would definitely explain that creepy doll for example. I'd only give this a 20 percent chance, though, because it seems sort of general, and we already did the whole school theme with Coven.

5. There Isn't Just One Theme

Acccording to the YouTube channel GoldDerby, Ryan Murphy seemed to insinuate there won't be a theme at all. He said: "We’re playing with a different form, so it’s not like any Horror season you’ve ever seen. It’s very very radically different [with] the narrative structure of what we’re doing." I could really see this happening — there have been so many teasers, after all. A 70 percent chance is fair.

We never really found out what happened with the aliens in Asylum, so maybe this time around we will. Plus, there have been a whole bevy of alien themes in the teasers — crop circles, eerie alien-sounding tunes, etc. — so it's totally possible. I'm going to say a healthy 10 percent.

We've only got a few short hours until we know the truth. Keep strong guys, we can face it!

More like this
'Bridgerton' Newbie Hannah Dodd Has Thoughts On Colin and Penelope’s Love Story
By Bustle UK
The Weeknd Is Turning 2020’s ‘After Hours’ Into A Nightmarish Haunted House
By Radhika Menon
On 'Industry,' Marisa Abela Takes Control
By Morgan Leigh Davies
What’s New On Netflix: 'Never Have I Ever' & 'Indian Matchmaking' Return
By Arya Roshanian
Get Even More From Bustle — Sign Up For The Newsletter