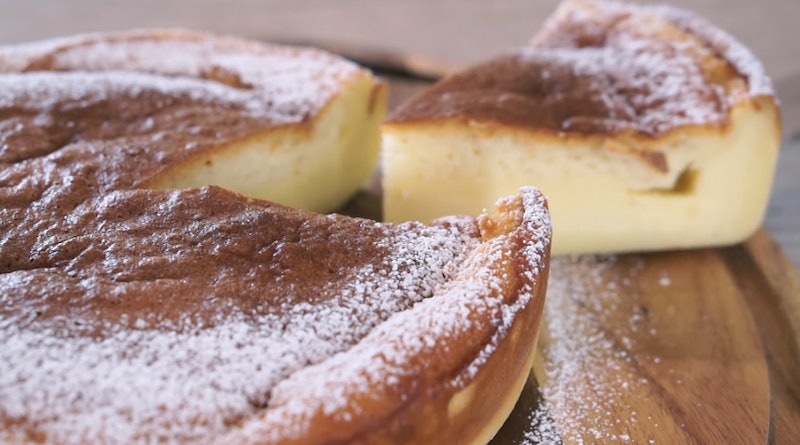 Watch pretty much any baking-intensive show (not cooking — baking), and you'll hear, "Baking is a science" repeated over and over and over again, a mantra for the flour-covered. And it's true — baking is essentially one very delicious chemistry lesson. But despite that fact, I still find myself wondering about the exact science of "Magic Cake." Because it's absolutely blowing my mind. And everyone else's, too, for that matter.

Though it has been circling the interwebs for several years now, Magic Cake has recently taken the social media foodie channels by storm. Why? Well, it's an easy recipe, for one thing. I'm all about watching cooking and baking tutorials, but 90 percent of the time, the recipe immediately becomes too difficult or too fussy or too time-consuming for me to make myself, and I'm relegated to lying in my bed, phone in one hand, chips in the other. But Magic Cake is simple. Like, weirdly so. It's a one-bowl recipe. There are no bizarre ingredients, and no difficult techniques. (I mean, you do have to separate egg yolks and egg whites, which is gross because raw eggs are gross, but apart from that, you're golden.)

Then, of course, there's the actual result. By combining eggs, water, flour, sugar, milk, and butter (yes, those are the standard cake ingredients, for those of you who usually rock the boxed mixes) in an exact order, you create a three-layered cake.

That emerge from one pan.

Literally all you do is put the pan in the oven.

And let the batter do its thing.

I promise this is not witchcraft — food science is just really cool. This is why: According to the Telegraph, Magic Cake batter is looser than most, and by looser, I mean it's more liquid-y. It's also baked at a lower temperature (depending on the specific recipe, between 300 and 325 degrees Fahrenheit) for a longer period of time, allowing the mixture to slowly settle into a dense, fudge-like bottom layer and a custard center. The spongy top layer is provided by whipped egg whites, which are added last to the batter.

Yeah, I didn't think so.

Check out the full video here for a step-by-step recipe: