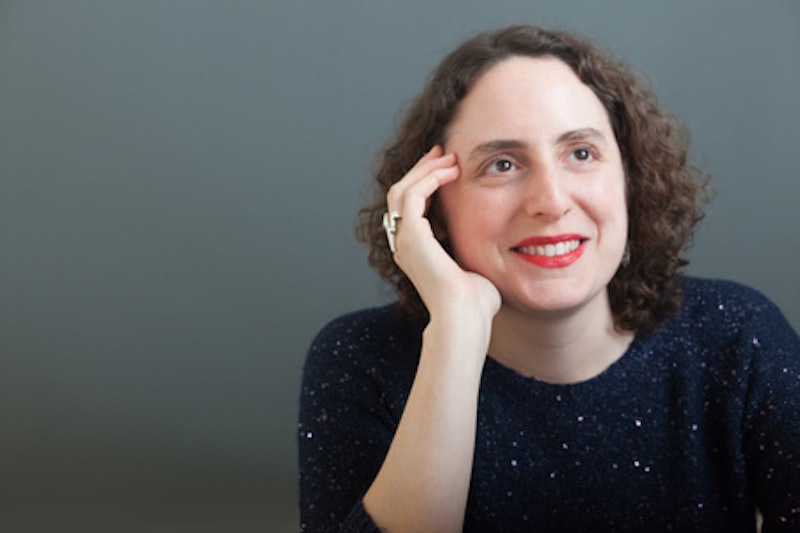 I’m 34 years old, and it took writing a young adult novel for me to understand what love means – and who I really am. My queer coming out story is not like the one that, until a few years ago, seemed to be the only one featured in movies and TV and books, if it was featured at all: filled with parental tantrums and screaming fights, bullying or hate-fueled violence, maybe even ending in disease or death.

My queer coming out story is much quieter. It is me, a late bloomer: a 34-year-old cisgendered Jewish woman from a liberal, accepting family, steeped in queer culture since I was young, a frequent resident of safe queer spaces, a friend to a vast variety of queer-identified people, a relative to queer family members, a therapist for queer youth at an LGBTQ community center.

It is happening right now.

I am well aware of my privilege. Coming out for me doesn’t present the same risks that it does for so many others – for many of my clients, for example, who even in this day and age of legalized gay marriage and greater pop culture representation, still may get thrown out of their homes or beat up at school for calling themselves gay, lesbian, trans, bi, genderqueer. They could lose their jobs, or not be able to get a job at all. They could be subject to harassment on the street, to violence, to death. That story we saw in Boys Don’t Cry seventeen years ago? It’s still a story that gets told, over and over again. It’s still real.

But why did it take me so long to figure this out? And why am I doing this now?

Like many things related to sexuality and gender, it’s complicated.

As a woman, I was raised to believe my own ideas about my sexuality were not that important. My parents didn’t raise me this way, though we didn’t spend much time talking about the subject. But it takes more than silence to fight this part of our culture, woven as it is into the patriarchal, misogynistic fabric of our society. The messages are subliminal. For years I believed as a smart, nerdy, not-conventionally-beautiful young woman, that I was not really worthy of the breathless, all-encompassing romance depicted in pop culture products featuring women who did not look like me: blonde, blue-eyed, skinny women with petite noses and a willingness to downplay their own intelligence and talents to get a man.

You can’t be smart and in love, I thought.

And then I fell in love.

I thought he loved me because of these things, not in spite of them, and I think he did. Mostly. We had a tumultuous two and a half years of a long distance relationship. We fought a lot. When he was an asshole to me, I would hang up on him. He would threaten to kill himself. I knew, inside, that this was not normal and not okay, but I thought: If not with him, then who?

It took me five and a half years to realize the relationship was not a healthy one, that for all his talk of being a feminist, he still loved me best when he could control me. I could not be the damsel-in-distress to his superhero. I could not be his angel or his savior, either. I could only be me. I left him.

A year later, he killed himself.

He did it after calling me on the phone. I was in California, where I had moved to start a new life. I was thousands of miles away and incapable of saving him. He was an asshole to me. I hung up on him.

Do I regret it? Of course I do. For all the pain he caused me, I didn’t want him to die. I still loved him, even though I knew he wasn’t right for me, that we weren’t right for each other. I still love him now. I love him so much that I wrote through all the grief and the anger and the guilt and the shame just to get his story — and mine — out into the world. It took ten years, but in 2017, it will finally be my first published novel.

It was worth it.

Speak of Me as I Am centers around the story of a young man named Damon whose best friend Carlos committed suicide for reasons Damon doesn’t understand. As Damon sorts through the photos Carlos left behind for him, he begins to see Carlos for who he truly was – which means acknowledging the way Carlos saw him. It’s a story about grief, yes, but also about the dangers of keeping secrets – especially ones about who and how you love.

Over the last ten years, I’ve written many, many other stories. Fanfiction. Original fiction. Parts of novels. Memoir. Many of the stories I’ve written have been about queer characters, in particular gay boys like Carlos. I’ve gotten questions about that, often. Why do you write so much about gay boys? You’re not a gay boy. No, I am not. But many of the stories I’ve written and read over the last ten years have been queer fiction because I have always known, even when I couldn’t articulate or label it, that I am queer. I’ve known that I had attractions to both women and men, that I could fall in love with either.

Sometimes you have to read your own story before you can live it.

When people talk in the abstract about the politics of representation, this is what they are talking about. It’s not just about "political correctness," about counting numbers, about making sure everyone gets their share. It’s about people being able to see themselves reflected in the larger culture. I need queer stories because I need to believe that I am deserving of love. When I read Boy Meets Boy by David Levithan, I loved how it was fantasy dressed up as an inevitable reality – a reality that we are closer to now than we’ve ever been. When I read Benjamin Alire Saenz’s gorgeous Aristotle and Dante Discover the Secrets of the Universe, I thought about how beautiful it was that this story was a reflection of one I hadn’t seen before: queer boys of color finding love through friendship and each other. When I read Simon vs. the Homo Sapiens Agenda by Becky Albertalli, I loved that it treated the gay romance as romance, just as sweet and fraught and turbulent and kooky as any other teen romance. And when I read Adam Silvera’s incendiary More Happy Than Not, I was emboldened by his fearlessness, his bravery, and his willingness to show why falling in love as a young queer person is not the same as any other teen romance, so weighed down as it can be by bigotry and self-hatred and fear.

There are so many others. There are more than there have ever been, and that is so incredibly exciting. It is so exciting that publishing has finally chosen to reflect these stories, to convey the message to the young people of the world that their stories are worth reading and worth celebrating. There are many, many more stories to be told, but it is still exciting. We are headed in the direction we need to go.

Truthfully, I haven’t read a story that represents mine just yet. This means I might have to write it. So. I am 34 years old. I am a cisgendered, bisexual, Jewish woman. I am here. I am now.

I have loved many people since my ex-boyfriend died – as friends, as more-than-friends. I have had numerous crushes on people both real and fictional. I am a romantic. I still want that breathless romance. I still fear that I don’t deserve it.

But I am deserving of love.

More like this
'Heartstopper’s Joe Locke Has A Sweet Message For Queer Fans
By Sam Ramsden
Jake Daniels Just Became The UK’s First Active Football Player To Come Out As Gay Since 1990
By Sam Ramsden
Target Dropped *Two* New Fashion Collabs With Queer-Owned Brands
By Dominique Norman
The 20 Best Audiobooks To Fall Asleep To
By Aoife Hanna and K.W. Colyard
Get Even More From Bustle — Sign Up For The Newsletter