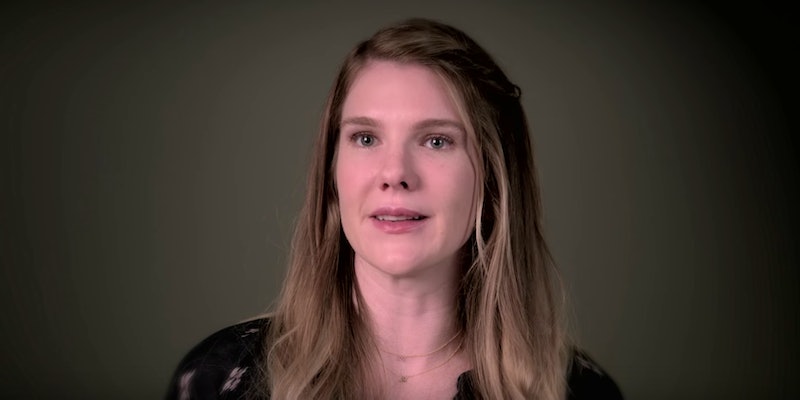 Complete with talking head segments and reenactments, AHS uses the framing device in order to show the haunting of Matt and Shelby, a married couple who have just moved to a house in the former colony of Roanoke, North Carolina. The doc will appear in at least the first two episodes of AHS, but some fans are speculating that the new season of AHS isn't exactly as it seems.

Though some beloved actors, like Lily Rabe, Angela Bassett, and Sarah Paulson, have returned for the series, the "reenactment" segments make it acutely clear that the haunting scenarios aren't "real" — it's distancing, especially for a series that has given us such intimate portrayals of its characters in past seasons. Perhaps most confusing is that the audience already knows that the actors within the story will be perfectly fine, removing any real level of tension. However, what if that's exactly what American Horror Story wants us to think, before pulling the rug out from under us? Some fans are speculating that the people we think are actors might not be the show's actors after all, and it would be an epic twist.

Though it's interesting to see AHS exploring a new device to tell a horror story — especially considering so many horror films are now being told through found footage, mockumentary, or "hidden camera" framework — the device might not work the way we think it does. Some fans think that the actual "actors" in this scenario are Lily Rabe and Andre Holland, while Sarah Paulson and Cuba Gooding, Jr. represent the real events that happened instead of a reenactment of them. If that's the case, it opens up a slew of possibilities for what's really going on here: perhaps Rabe and Holland's characters were hired to pretend that the haunting that happened to Paulson and Gooding Jr.'s characters played out in a certain way. Perhaps the truth of what happened to the real Matt and Shelby is so awful that a documentary series could never dive into it, so they had to cloud over it with actors of their own.

There are some clues from the first episode that support this. The first is the behavior of Rabe's Shelby and Holland's Matt while giving their talking head interviews. Despite the insanity of the story they're telling, these versions of Shelby and Matt are able to remain calm, almost like they're reading off of a script. Only Adina Porter's character, who plays the "real" version of Angela Bassett's ex-cop character, seems unsettled by the events, even asking to stop during the interview portion. Could it be because she knows the truth about what kind of a show they're really making?

The clues don't stop there. Rabe, Holland, and Porter are younger than the actors who play their "other halfs" by nearly a decade. Not the weirdest thing in the world, of course, but a little strange considering that, theoretically, the reenactments events took place years prior. It's almost like the roles should be reversed in order to make sense.

Then there's the behavior of the actors. They don't seem to match up with what the narration is saying. Shelby, for example, laughs off her sister-in-law Lee's dismissal of her. However, when we see the reenactment version of Shelby and Lee — Paulson and Bassett — the two get into a fight that feels far more intense and deeply rooted than the one Shelby brushed off. In fact, the reenactment characters seem to feel deeper in every scene. They feel much more like real people than the narrators do.

If you've ever watched a show that uses reenactments, you know that the reenactments are rarely in depth. Typically, the reenactments are used as B-roll footage to move the story along, like it does in Celebrity Ghost Stories on Lifetime. But American Horror Story seems to be doing something different: without the narration, we could still clearly understand what's going on with Matt and Shelby.

Is American Horror Story totally playing us? It wouldn't be the first time AHS has pulled off a major twist. Last season, AHS totally blew our minds when it made our "hero" John the 10 Commandments Killer. Could this season be looking for something that changes what we think of as reality as well? Only time will tell, but I'm hoping that the show has a reason to use such a distancing framework. I want to love these characters, but, first, we need something that proves we know the real them.