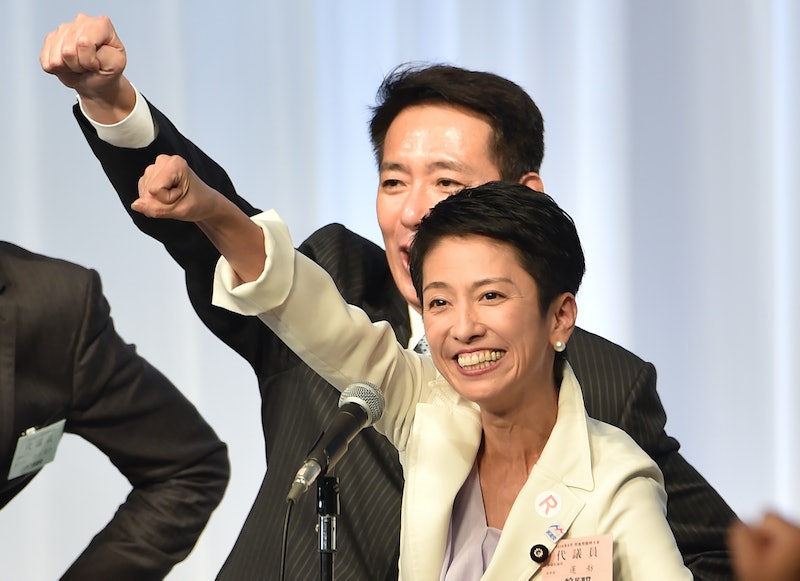 There may be no greater time for women to get into Japanese politics than right this very minute. While Japanese women are largely underrepresented in their country's political system, a few women have been fearlessly blazing trails toward positions in high office over the past two months. The latest woman to put a crack in the glass ceiling is Renho Murata, the first woman to head Japan's opposition Democratic Party of Japan (DPJ).

Murata was elected head of the DPJ, the country's biggest opposition party, on Thursday, following the resignation of the party's former leader Katsuya Okada in July. Murata's election as president of the DPJ is also noteworthy because of her ethnic heritage. Born to a Japanese mother and a Taiwanese father, Murata is reportedly the first person of mixed heritage to head one of Japan's major political parties, the Wall Street Journal reported.

Murata's election win follows on the heels of two other women taking prominent roles in Japanese politics. In July, Yuriko Koike was elected the first female governor of Tokyo. Not more than a month later, Tomomi Inada was appointed Japan's defense minister in August while receiving some high praise from Prime Minister Shinzo Abe, who called her a "very strong candidate" for his own job, according to the Washington Post. With Inada reportedly being groomed to serve as Abe's successor within the ruling Liberal Democratic Party and Murata at the helm of the country's opposition party, could Japan be moving toward a female prime minister?

Although, these three ladies are undoubtedly shaking up Japanese politics, women remain grossly underrepresented in the country's government. For example, Inada is one of only three women in the prime minister's 20-person cabinet.

While women have had the right to vote and run for office in Japan for 71 years, they hold few positions when compared to their male counterparts and (perhaps more disappointing) appear to be pushing into Japan's political boy's club at a sluggish pace. According to the East Asia Forum, "Japan has the lowest percentage of women’s political representation in the industrialized world." And indeed, the numbers are disheartening. In July, women reportedly occupied only 9.5 percent of the seats in Japan's Lower House — a marginal improvement from the 8.4 percent of seats they won in the Lower House election of 1946, according to the Japan Times.

Japan appears to have a long way to go before women are accurately represented in politics — they reportedly accounted for 51.35 percent of the population in 2014 — but the recent appointments of Murata, Koike, and Inada to high office could lead to an upswing in the number of women participating in the country's politics. Slowly, but surely, women are beginning to change Japanese politics.