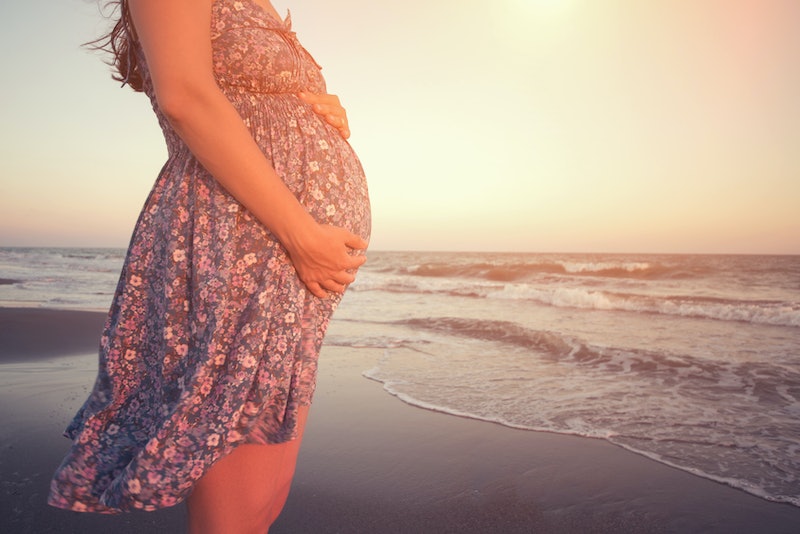 September is National PCOS Awareness Month and since polycystic ovary syndrome can cause infertility, you may wonder: Can women with PCOS still become pregnant?

In short, yes. It just may take some time and effort, but it is still possible. Some women may even be told they won't be able to get pregnant with PCOS, but then are able to conceive a few years down the road. But first — what exactly is PCOS? According to the Mayo Clinic, doctors look for at least two of the following symptoms before they diagnose someone with it: Irregular periods (i.e., everything from if cycles are more than 35 days apart to getting less than eight periods a year) excess androgen (i.e., facial and body hair in atypical places, acne, and male-pattern baldness), and polycystic ovaries (i.e., when ovaries are enlarged and contain small fluid-like sacs around the eggs).

PCOS can also cause weight gain, infertility, and an increased risk of diabetes and heart disease. In addition, someone with it may have elevated glucose and/or blood pressure and weight gain around the middle, Dr. Nieca Goldberg, Medical Director of the Joan H. Tisch Center for Women’s Health at the New York University Langone Medical Center and author of Dr. Nieca Goldberg’s Complete Guide to Women’s Health , tells Bustle.

“PCOS is the most common cause of infertility in women,” Dr. Amy Schutt, a reproductive endocrinologist at the Family Fertility Center at Texas Children’s Pavilion for Women in Houston, tells Bustle. “These symptoms are related to the underlying hormonal imbalances that occur in PCOS. So what causes these symptoms? Normally, a carefully orchestrated conversation between the brain and the ovary occurs each month to control the growth and release of an egg (ovulation). However, in PCOS, this hormonal conversation between the brain and the ovary is out of sync. This is what causes skipped periods, infertility, and the other symptoms associated with PCOS.”

So, in regard to infertility — what’s a woman with PCOS to do? “There are a number of medications that you can take to ovulate more regularly,” Sherry Ross, MD, OB/GYN and Women’s Health Expert at Providence Saint John’s Health Center in Santa Monica, CA, tells Bustle. “If Clomid fails, metformin and gonadotrophins are next on deck to get your ovaries working properly.”

I spoke to women with PCOS who were able to conceive children, and here are their stories, along with pictures of their children.

“I was diagnosed with PCOS when I was 17. I am now 34. I have 2-year-old twin girls and am pregnant with my third child. It is important to know and understand your diagnosis for many reasons, one of them being that it affects your fertility. My advice to women who suffer with PCOS and fertility issues is this:

1. Be proactive. Find a good fertility specialist (you might have to interview a few) and map out a plan.2. Try to be patient. Everything depends on careful timing, your body, and your body’s reaction to medications. 3. Be prepared for medication side effects (i.e., mood changes, nausea, ovarian cysts), and talk to your doctor and nurses about what to expect. 4. Try, try again. Chances are, you won’t get pregnant on your first round. Be prepared to feel some disappointment, and then pick yourself up and move forward. 5. Find out if there’s anything you can be doing to prepare your body for pregnancy. This could mean diet changes, exercise changes, medication changes, etc.6. Know that you are not alone. So many women are dealing with the same journey. Find them, connect with them, share your story, and do whatever you need to do to take care of yourself during this frustrating time. 7. Have faith. This will be a time of stress for both you and your partner, and your attitude will have a huge impact on how you deal with the whole process.

2. Halina Newberry Grant, 43, Contributor for The Next Family

“I first had some idea that I had PCOS when I was about 24. I had a yearly checkup at Planned Parenthood, and the doctor said she was pretty sure I had cysts on my ovaries. I realized I had all the symptoms. I was freaked out, but I was also not ready to have kids, so I put my worry on the back burner. Also, I was single and uninsured, so I didn’t have a lot of options. (Thank God for Planned Parenthood!)

After realizing that there wasn’t anything I could ‘do’ about it, I went on The Pill to help regulate my hormones. Eventually, I got insurance and worked with a doctor, who put me on metformin [Anti-Diabetic medication]. By that time, researchers discovered that treating PCOS like insulin resistance could be effective. I stayed on the metformin for maybe six months. I hated the side effects and really didn’t notice any benefits. Making dietary changes really helped to regulate my blood sugar and hormones, so I don’t eat sugar or gluten, and it has really helped.

I also struggled with fertility. My husband and I have a beautiful daughter, and would like to have more — it’s just not easy. It takes a little longer for a lot of us women with PCOS, a little more money, a little more medical help, but don’t give up if it’s important to you. Every woman I know who has struggled with PCOS who wants kids, has kids. There is no reason to get discouraged or feel defeated. Focus on the solution, not the problem.”

“I found out I had PCOS when I was 23. I was on Depo-Provera birth control for four years and I hadn’t gotten a period in that time. I started gaining tons of unexpected weight, had horrible breakouts, and started getting a very hairy face. I went to see an endocrinologist, and she told me that I was insulin-resistant and had PCOS. She also told me that it would be nearly impossible for me to get pregnant and I’d need fertility treatments, should I ever want children. I accepted that I wouldn’t have children, and I was okay with it. It was a total welcoming surprise when I found out I was pregnant. PCOS is not a death sentence, it’s a wake-up call. The sooner you find out, the sooner you can do something about it and prevent an even bigger problem, like diabetes...Meditate, love yourself, and treat your body like the temple that it is.”

“While women without PCOS have no problem getting pregnant, it’s incredibly difficult for me without medical intervention (and often medical interventions fail), and I often struggle with feeling like less of a woman because of it. I have one child (a daughter, age 6.5 years old), after several rounds of infertility treatments. In 2009 when we were trying for her, I responded perfectly to the lowest dose of Clomid, and that is what I took to conceive her. It took seven rounds.

We have tried to conceive another child for 4.5 years, and that time has included everything from the max dose of Clomid to natural remedies to aggressive fertility drugs. I didn’t respond to Clomid the way I once did, and had to move into Follistim (an expensive medication administered at home via injections). Unfortunately, even with Follistim, we have been unable to conceive. We’re never ‘not trying,’ but we’re not in the midst of medical interventions right now.

While there is a textbook definition, I have never met a single woman who has every single symptom in the book. Often, two or more symptoms are enough to diagnose PCOS, but treatment from there can be tricky because it looks so different for every woman.”

“I didn’t know I had PCOS until I was 30 and trying to conceive my second son. In fact, I didn’t even know what PCOS was until a nurse put two-and-two together and suggested I get tested. Before then, I had irregular periods, weight gain, acne, hair loss, mood swings, the list goes on.

Later, when I married and was ready to conceive, it took a round of Clomid before I was blessed with my first beautiful baby boy. After my son was born, my husband and I thought that when we were ready to have another, it would just happen, maybe with another round of Clomid. But charting my cycles revealed that I wasn’t ovulating. It was one of the most emotionally difficult periods of my life.

After months with no luck, my husband and I decided to see a reproductive endocrinologist. I had all the fertility tests, including the HSG (hysterosalpingogram) test. I was finally officially diagnosed with PCOS and put on metformin (which made me sick as a dog), a higher dose of Clomid with monitored cycles and, eventually, injectables. It took many monitored cycles (actually the last before I would have to consider IVF) before I became pregnant.

After the birth of my second son, I did not bounce back... I wanted to begin managing my PCOS naturally.

PCOS has been one of the most positive things in my life, and may have saved my life. While I had always been an active and athletic person, my diet was a mess. Processed foods, pharmaceuticals, and inferior-grade supplements had wreaked havoc on my hormones and overall health. Discovering I had PCOS inspired me to learn all I could about it and develop a plan to heal.

Then, one morning in 2008, I woke up feeling exhausted. I thought I was coming down with the flu. I soon found out it wasn’t the flu; I was 11 weeks pregnant. It felt like a miracle after doctors told me for years that I would never get pregnant again without fertility treatments.

PCOS didn’t only change my life; in effect, my PCOS diagnosis and experience has helped change the lives of

thousands of women who have been helped by PCOS Diva.”

“Living with PCOS sometimes has its perks (what girl doesn’t love not getting her period every month?), but when it came to trying to get pregnant, it was incredibly hard to live with — my husband and I saw all our friends getting pregnant and having kids, and we were struggling. I had a feeling it’d be hard — I pretty much knew I had PCOS from earlier testing — but I also knew it was manageable and I would be able to get pregnant with help. The infertility was much easier to digest than it would have been if I didn’t know I had PCOS.

I also think it’s important to know what’s going on with your body and what’s happening inside of it, so you can understand how it affects you wholly. PCOS isn’t the end of the world, and some of the symptoms are manageable. Infertility, too, is manageable — and my son is living proof.”