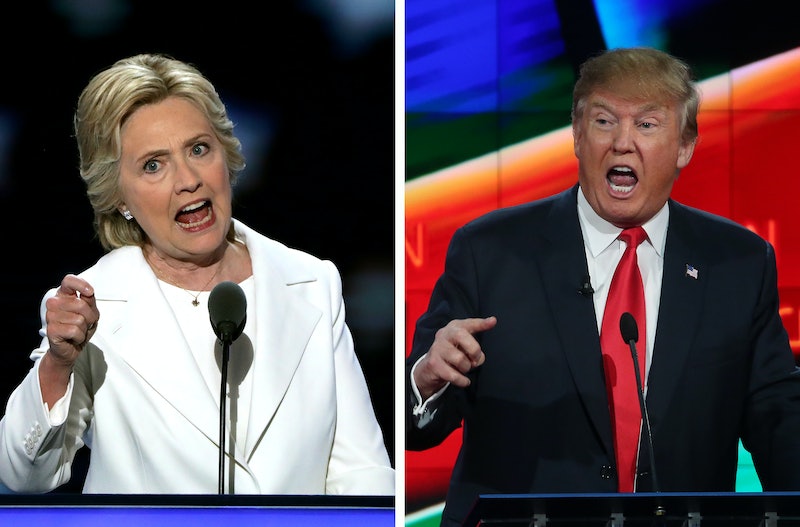 The never-ending 2016 presidential election will be ending soon, although that also means that the world will have a new American leader, and at this point, I have no clue who that might be. Just in case anyone isn't totally set on who they're voting for, there will be a few opportunities ahead of Nov. 8 to figure out who deserves your precious vote, especially at the upcoming presidential debates. Here's a look at the 2016 Presidential debate schedule, so you can follow along.

There are presently four debates scheduled for the coming weeks — three presidential debates and one vice presidential debate — so prepare to get your fix of 2016 election GIFs and memes on Twitter. And honestly, these are going to be the debates you don't want to miss. During the primaries, there was something really special about the 17 Republican candidates on stage fighting for a nomination, as former businessman Donald Trump stole the show from the various career politicians. On the other hand, the Democratic debates between Hillary Clinton and Vermont Sen. Bernie Sanders were something of substance — at least there was actual debate.

Now, the debates between the two most unfavorable candidates in history are coming to your TV, and while I'm sure Clinton will be prepared with arguments and proposed policies, I'm curious to see how Trump will deal with the so-called woman card face-to-face. This is one reality TV show you won't want to miss.

Here's the debate schedule, to get you excited about what's to come.

The first debate will take place on Monday, Sept. 26 at Hofstra University in Hempstead, New York. This debate will be moderated by NBC Nightly News anchor Lester Holt, even though Trump originally proposed no moderators at all. He told CNBC, "I think maybe we should have no moderator. Let Hillary and I sit there and just debate, because I think the system is being rigged so it’s going to be a very unfair debate." Said the man who essentially rigged his way into the 24/7 news cycle for the last 15 months.

The second debate is scheduled for Tuesday, Oct. 4 at Longwood University in Farmville, Virginia. Elaine Quijano of CBSN will be the moderator. However, this will be a Vice Presidential debate, so we will have the chance to hear from Mike Pence and Tim Kaine.

The third debate will air on Sunday, Oct. 9 at Washington University in St. Louis, Missouri. Moderated by Martha Raddatz and Anderson Cooper, the debate will be held as a town hall, offering voters the opportunity to pose some questions of their own. Candidates will each receive two minutes for responses, but we all know time restraints and delegating talking points don't always work.

The final scheduled presidential debate will take place on Wednesday, Oct. 19 at the University of Nevada in Las Vegas, and will be moderated by Chris Wallace.

Debate season is fast upon us, and I am really looking forward to the cultural strides we will be making in American internet history at this time. Just like winter, the election is coming.

More like this
'Waterloo Road' Is Back, With More Than A Few Familiar Faces
By Sam Ramsden and Vivian Iroanya
Prince William Condemns “Unacceptable” Comments Made To A Black Guest At Buckingham Palace
By Shahed Ezaydi
Matt Hancock Broke a Major Rule With I’m A Celeb
By El Hunt
Adam Driver & Joanne Tucker’s Relationship Timeline Starts With Cheese
By Jordyn Tilchen
Get Even More From Bustle — Sign Up For The Newsletter