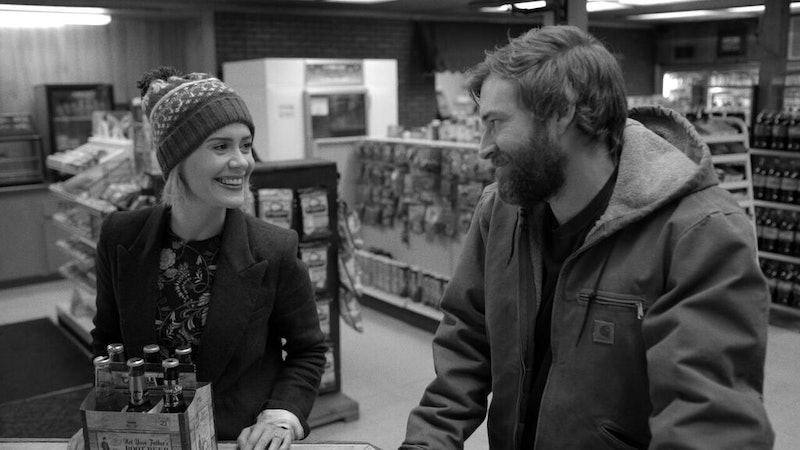 Anyone who's ever wondered what could've been with a high school sweetheart or love from the past will relish in joy watching the new film Blue Jay. Picture The Notebook, but without a giant engagement ring, rebuilt southern mansion, or clichéd happy ending. (I, an undying Notebook fan, say that with love.) Blue Jay sees Togetherness co-creator Mark Duplass giving it his all, both in front of and behind the camera; he's responsible for a moving and emotional portrayal of the lead male character Jim, and also acts as a writer and producer on the film. Alongside Duplass is the incomparable Emmy goddess Sarah Paulson, whose recent repertoire speaks for itself, making the cast of the film truly impressive.

The two are the only characters in the film, living in a small California town seen in black and white. The actors' raw and very real performances break through the simplicity to make audiences unexpectedly laugh, have heavy hearts, and most of all, feel they are not alone in having traveled too far down a path to turn back. After 20 years, high school sweethearts Jim and Amanda (Paulson) bump into each other and quickly find themselves going down a blissful (and at times, extremely difficult) nostalgic journey. The film, out in the U.S. on Oct. 7 before later arriving on Netflix, has a deep yet effortless way of addressing universal feelings like regret, miscommunication, confusion, innocence, and pure love. Check out an exclusive first look of the movie poster, below.

Just from the poster, audiences can already get a glimpse at the film's beautiful simplicity, which will help it hit close to home for audiences who watch it. I know it did for me. So, if you're craving a tale of modern love, nostalgia, and realness so many romance films gloss over, Blue Jay will be a relatable and moving delight.

More like this
The First Trailer For 'That '90s Show' Includes So Many Nods To The Original Series
By Jack Irvin, Alyssa Lapid and Grace Wehniainen
Yes, That's Lindsay Lohan's Sister Singing In The 'Falling For Christmas' Movie
By Radhika Menon
How To Stream 'White Noise' On Netflix
By Grace Wehniainen
You’ll Be Able To Stream Bullet Train Before The Holidays
By Arya Roshanian and Radhika Menon
Get Even More From Bustle — Sign Up For The Newsletter