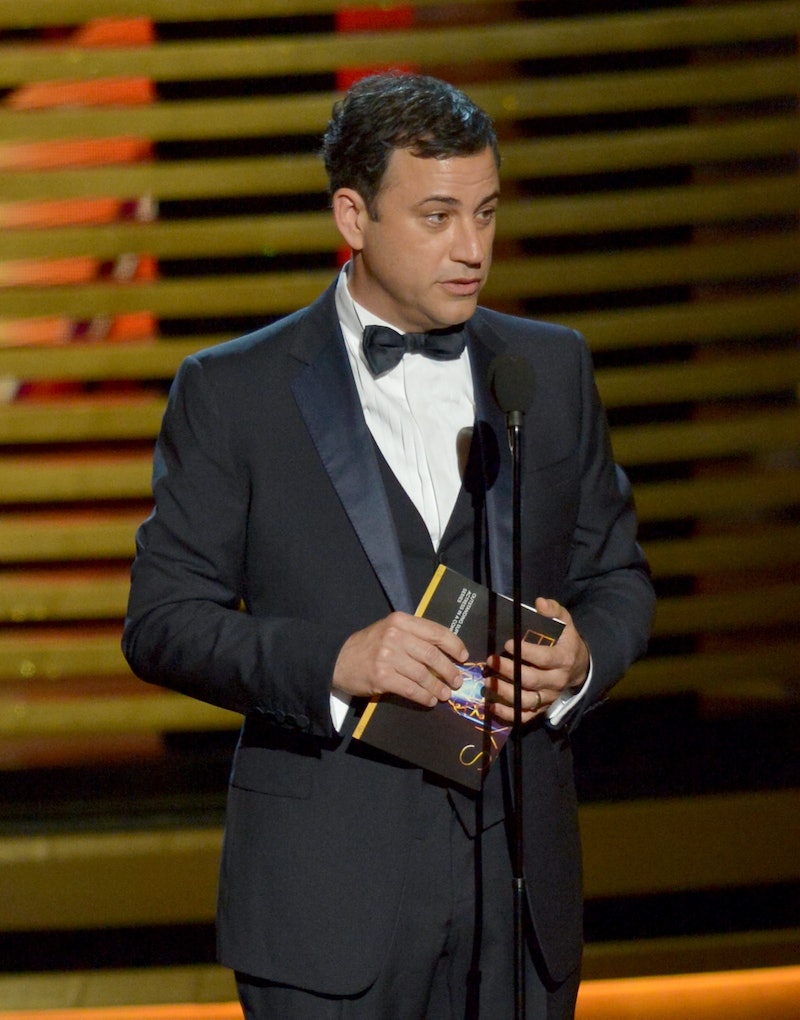 The one downside to live TV is the fact that it's LIVE, which means whatever happens will be put out there for all to see, for better or for worse. Granted, that makes things pretty exciting for us, the viewers. But from the point of view of the network executives, it can be downright stressful. And yet, that's the way show business works, which is why it should come as no surprise that there were plenty of awkward moments at the 2016 Emmy Awards. Because that's the way it is every year. It's unavoidable. People always say things they later regret, teleprompters malfunction, and bad jokes fall flat. It's become the norm at these types of ceremonial events and award shows.

Honestly, though, would we have it any other way? If everything ran smoothly without a hitch, what fun would that be? Sometimes it's nice to see the stars you idolize slip up in unexpected ways. It's fun to see how they handle awkwardness like any other human being in the world. (Celebrities: they're just like us!) And this year's Emmys proved to be no exception. From awkward red carpet interactions to cringe-worthy comments, and everything in-between, there was plenty of awkwardness to go around. But just in case you missed out on any of the excitement, here were some of the evening's biggest faux pas...

Even before the actual ceremony began things got a little uncomfortable when Giuliana Rancic made mention that Fallon's birthday was tomorrow and asked Tatiana if she'd be willing to wish him a happy birthday since they're both Virgos. She agreed to do it at the end, but it was obvious that she felt put on the spot and would've rather not. Maybe her hesitation was because Fallon invited Donald Trump on his show, or maybe she just thought it was a weird thing to ask. Either way, it made for a pretty awkward moment.

When Matt LeBlanc Commented On Emilia Clarke's GoT Nudity

I love Matt LeBlanc and the unforgettable Joey Tribbiani character he brought to Friends, however, I couldn't help rolling my eyes when the actor made an unnecessary comment about wanting to watch Game of Thrones after hearing Emilia Clarke gets naked on it. How you doin', LeBlanc? Because after that comment I've certainly been better.

We all know Lucious Lyon is a man not to be trifled with on Empire, but it seems that Howard may not necessarily leave his character strictly on set. During an interview on E! Live from the Red Carpet, the actor's wife was asked if he brings Lucious home with him ever, to which she responded saying it happens a lot. Yikes.

When Kimmel Said What We're All Thinking

In light of the upcoming election, a Donald Trump mention was bound to come up and it did in the form of Mark Burnett, the man who brought us Celebrity Apprentice and, according to Jimmy Kimmel, is the one responsible for Trump running for President. "If Donald Trump becomes President and he builds that wall, the first person we're throwing over is Mark Burnett." Of course, Burnett took it in stride, but let's just see how funny we find it come the end of the election.

When Aziz Ansari Didn't Get To Make His Speech

After winning Outstanding Writing in a Comedy Series, Alan Yang and the former Parks and Rec star took the stage to say a few words, but unfortunately, Yang took up too much of the speech time allotted for the both of them, so Ansari had to quickly run offstage before getting to say anything. He had a change of heart and tried to make it back to say something, but once again the music continued to cut him off. Tom Haverford would not stand for it.

Most of the late night talk show host's jokes were on point throughout the evening, but when he took a jab at Transparent's questionable comedy category saying that it "was born a drama but it identifies as a comedy," it came off as somewhat offensive whether he intended it to or not.

When Bill Cosby Was Introduced As The Next Presenter

No one in the audience knew how to react when Bill Cosby was introduced as the next presenter and neither did viewers. (It was all a ruse on Kimmel's part.) Though, I must admit the looks on some celebs' faces were pretty priceless.

When Jimmy Kimmel Took A Jab At The In Memoriam

Not only did he say that this year's In Memoriam pretty much rocked, but also that it would be hard to beat next year. I know it's supposed to be said in good fun, but given how truly terrible 2016 has been in regards to celebrity deaths (Alan Rickman, Prince, David Bowie) the joke came off as a little unnecessary and not as funny as it was probably intended.

Overall, it was a great night for the world of television, though, and uncomfortable moments are to be expected of any live show or event. We can only hope that these mishaps will serve as a lesson for future award shows, so we can try to avoid as much uncomfortableness as possible.