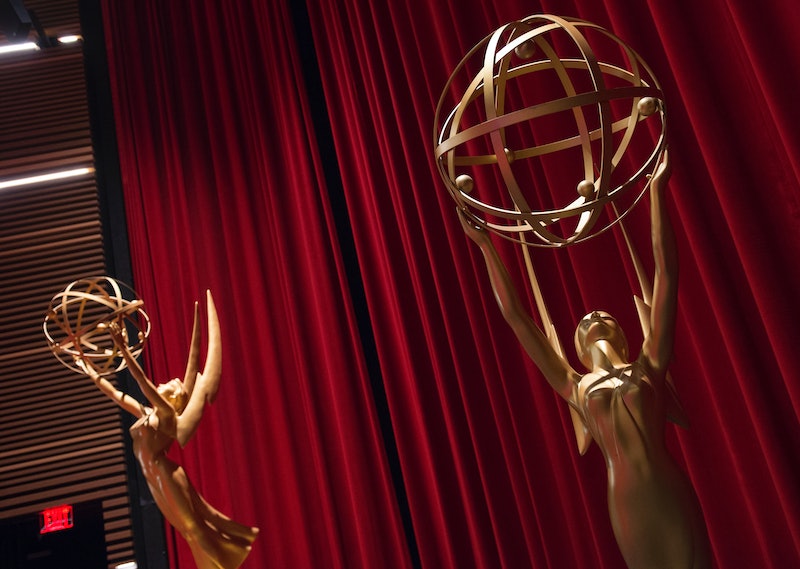 Football season may be in full swing, but there's one Sunday night that belongs to TV fans and that's the 2016 Primetime Emmy Awards, which airs on Sept. 18 at 8 p.m. (ET). Sure, there might not be any tackling in a literal sense (though I wouldn't completely rule it out), however, that shouldn't undercut the importance of television's biggest night. We're talking about an evening dedicated to celebrating all those shows that leave you glued to your living room couches at night — and let's be honest, during the day as well. So, suffice to say, it's definitely worth your time and energy. But, of course, we all have busy schedules, which may leave many of you wondering how long the 2016 Emmys are so that you can plan your social calendar accordingly for the big event.

According to the TVGuide.com schedule, the awards show itself will kick off promptly at 8 p.m. (ET), immediately following the red carpet coverage, and conclude at 11 p.m. (ET). That means the ceremony is estimated to run for at least three hours, though, these types of things always tend to run longer than expected, so it's more likely to come to a close around the 11:30 p.m. (ET) mark, if you ask me. And while that may sound like a huge chunk of time to give up at the end of your weekend, let me assure you that it's well worth tuning in for in its entirety. For starters...

Most of the time, you're used to seeing these actors in character and performing a scene over and over again until they get it right. But when you're dealing with a live show there are no re-takes, which means anything can happen. Teleprompter doesn't work? Get ready for some awkward fumbling. Someone drops the F-bomb too quickly for the censor to catch during their acceptance speech? Oh well! And those are just some generic examples. When it comes to live stuff the sky is the limit and you don't want to be the one who misses out on all the mayhem.

When it comes to hosting an awards show, the opening monologue can make or break how well you're received. Aren't you curious to see where this beloved late night talk show host will fall on the Emmy hosting scale?

Expect To See All Your Hollywood Favorites

Sure, there are some people who may not be able to appear, but on the whole, stars make a real effort to show up in the hopes of walking away with that iconic statue. And really, let's all just admit that watching celebrities interact and bond with one another is pretty much the greatest reality television there is out there.

While some speeches may just be your standard procedure of listing all the people you'd like to thank, others can be extremely emotional and highly inspiring. It presents the perfect podium for the actors and writers to share their thoughts on important issues, which makes listening to all the "I'd like to thank the academy" declarations well worth it.

As you can see, there's a lot to look forward to during television's biggest night. And given all of the outstanding shows that can be found on the small screen these days, it's no wonder they need three hours to give every category its rightful time in the spotlight.