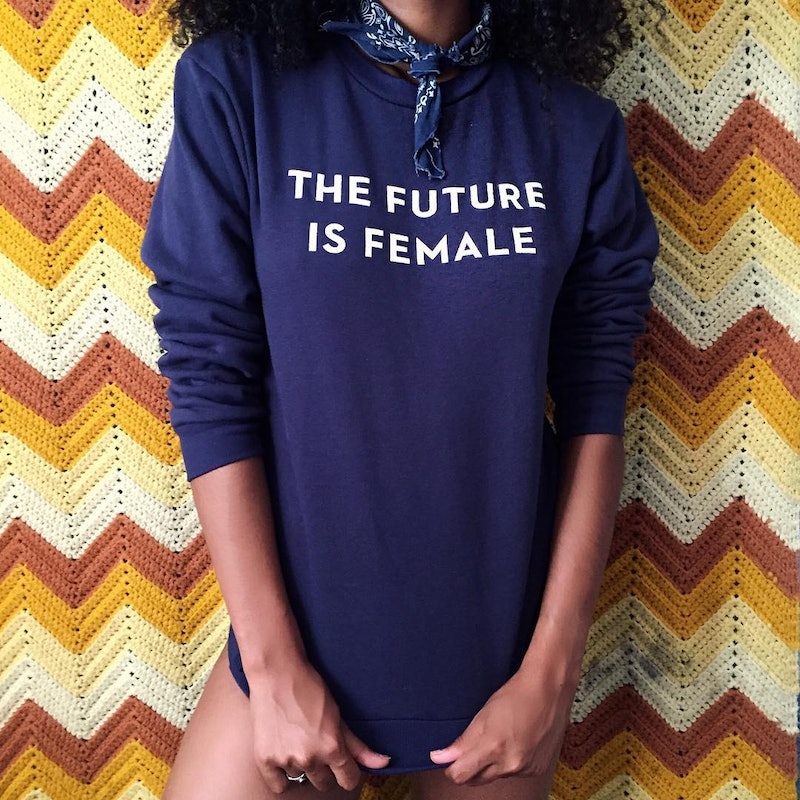 I was 11 years old the first time I was called a whore. I had no idea what the word meant, but knew that it was something really, really bad based on how much trouble the older boys got into after my 6th grade teacher overheard them yelling at me. Over the last 15 years, I've heard that word — along with b*tch, slut, c*nt, and many, many others — more times than I can count, all with the intention of tearing me down. Luckily for me, and for every other woman out there who are sick and tired of these reserved-for-females words being used to belittle them, artist Whitney Bell is trying to do something to change the narrative. Her new clothing line, KIDD BELL, is working to reclaim the words meant exclusively to offend women, and is everything the feminist movement never knew it needed.

Bell is best known her gallery show, "I Didn’t Ask For This: A Lifetime of D*ck Pics," in which she took a collection of unsolicited dick picks and put them on display as an art installation (which is, by the way, the most badass thing I've ever heard). After seeing the overwhelming response to the show, Bell wanted to continue to spread her message of feminist empowerment — and thus, using the leftover merchandise from the show, the line KIDD BELL was born.

"For the first time women are finally doing as they damn well please, or at least trying to," Bell tells me over email. "I’m designing for this new era of woman, for the girl who is sick of being slut shamed, for the teenager who thinks her school’s dress code is misogynistic bullsh*t, for the boss b*tch who isn’t ashamed of being powerful."

Her mission is shared by a group of over 70 artists with whom she's collaborated to make many of the pieces in the product line, which includes clothing, pins, accessories and paraphernalia.

So who would she want to see wearing her stuff?

"I know it’s corny but I think my dream customer, is any woman who wants to waive that flag of empowerment," says Bell.

And of course, Beyonce. "Because, Kween slays."

It's important to Bell to make sure that the line is as inclusive as possible. She has made it her mission to use models and prodcuts in all shapes and sizes (the clothing comes in sizes XS to XXL) and she's currently working on a unisex line.

"It’s not just about girl power or about empowering women," she said "Feminism is no longer just the fight for women’s rights, but the fight for equal rights for all oppressed groups."

Bell's inspiration for the line came from her frustration with seeing the world trying to claim ownership over the female body. "But the second a woman owns her sexuality, feels empowerment in her nudity and celebrates her body, she is villainized, called a sl*t and wh*re, shamed for her self-acceptance," she says. (Kim Kardashian West versus Piers Morgan, anyone?)

To combat this double standard, KIDD BELL attempts to take words that have traditionally been used to belittle women and reclaim them through her art and clothing. "Words like sl*t, c*nt and b*tch have always been used to put a woman in her place," she said. "I want to change the narrative. To take back these words for our own, to wear them like a badge of honor."

Bell's hope is that by reclaiming the words that have been used to tear women down, she can also help us reclaim some of the worth that society has tried to strip from us. "Hopefully, in some small way, proudly bearing a c*nt tee, or sewing on a sl*t patch will make my customers feel a little stronger, a little more in control," she said.

And the best part? A lot of the proceeds from the sales go to feminist charities — like Planned Parenthood, The Center for Reproductive Rights and The National Domestic Abuse Hotline.

Feminists, unite, and let's never let boys call us "sl*ts" and "wh*res" again, unless they're reading our t-shirts.

More like this
Women Around The World Are Cutting Their Hair In Solidarity With Mahsa Amini
By Darshita Goyal
15% Pledge Director LaToya Williams-Belfort On The Impact Of Supporting Black Business
By Dominique Norman
Berriez Founder Emma Zack On Her Size Inclusive NYFW Show
By Dominique Norman
Prefer Alcohol-Free Perfumes? Water-Based Fragrances Are On The Rise
By Audrey Noble
Get Even More From Bustle — Sign Up For The Newsletter