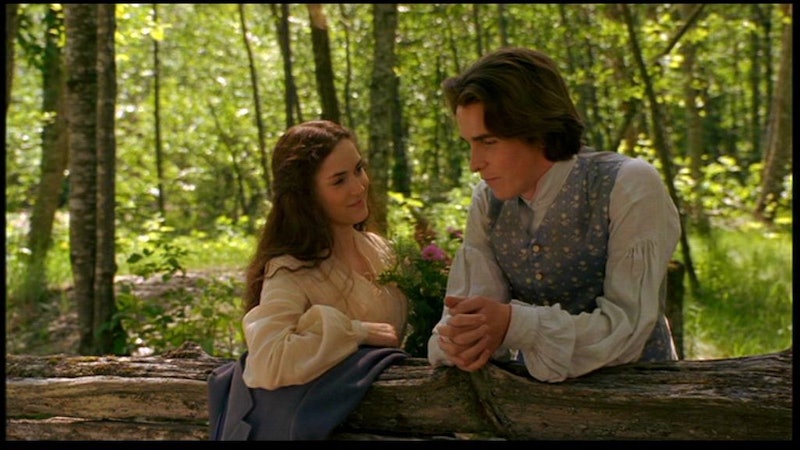 I started reading books on my own at age six or so, but before that I would memorize the words my mom read to me and then say them back out loud to myself as I flipped through the pages. The stories grew roots in me. I began to feel this way about movies, too, starting with Disney and progressing through John Hughes. I couldn’t adequately explain it to my family. It was like I had lived all these lives before. Even when the characters were different than me, even if they lived on the prairie or attended wizard school or traveled through time. They just felt like me — and I had many opinions about what they deserved, particularly in their love lives. But as I grew older, feminism helped me understand my favorite fictional heroines (and their love lives) a little bit better.

So, particularly between the ages of nine (when I picked up my first Harry Potter book) and 14 (when I got my first boyfriend and thus, my own, non-fictional life), I was heavily invested in all these characters. In everything I read or saw, I had strong opinions about what these people deserved, what I wanted for them. And mostly, this meant that I knew who they should be in love with at the end.

When I read Harry Potter, I became obsessed. I decided very early that Ron and Hermione belonged together. The idea of any other pairing for either character made me so unhappy and so uncomfortable. I would get into arguments about it, on online forums and with my real friends. I remember the feeling of vindication when Ron and Hermione kissed in the final Harry Potter book. I had been right; there was no other option. Of course, not every story followed the ideals I had in my head.

I was about twelve when I first saw the movie Pretty in Pink and, like many young girls, I was baffled by the ending. Andie chose Blane, the popular guy who broke off their date to prom because he didn’t want to be seen with a poor girl, rather than Duckie, her lovable best friend who worshipped the ground she walked on. I failed to grasp why anyone would ever, ever do this.

I re-watched Pretty in Pink recently.

Duckie is the worst.

I know that guy now. The guy who always expected that he would just get to have you, no questions asked. And when he doesn’t, he’s livid. “I would have died for you,” he says. And you repay me by not choosing me? How dare you?

How did I see that as a loving relationship? Really, though, what else can we expect, when every man on our screens and pages just needs to meet the basest levels of human decency to be worthy of unwavering and unconditional love? My vehement defense of these would-be lovers was backed by a culture that tells me, “If there is any man showing any interest in you in any way, consider yourself lucky.”

When I was about nine I first read Little Women . And, though I loved it so much, I didn’t come back to it for a long time. In the book, Laurie proposes to Jo, and she declines. And that made me feel so sad and angry. I didn’t know why before, but now I get it. So that’s why I’ve written Jo a letter.

It’s been about fifteen years since I first read your story, so I’m sorry it’s taken me so long to apologize. I’m so sorry. The thing is, I was on Laurie’s side for a long time. When he asked you to marry him and you said no, I was devastated. And later when you found happiness with Mr. Bhaer, I resented you. I admit that after you hurt Laurie, I didn’t want you to be happy. I wanted you to be punished for refusing to marry a man you did not love.

I know that’s wrong now. But when I read Little Women at the age of nine or ten, I felt so unfit for my world. Like you. And at that age, when I felt the most unlovable, all I wanted out of life was for someone to love me the way Laurie loved you. Someone who saw in me what no one else saw. Someone who would never want to let me go.

I got that person eventually. A boy who loved me more than anything. I was so happy. And then, just like you, things changed. I saw more of the world. I met more people. And I realized that that boy had given me so much hope and so much joy because I truly believed, for a very long time, that he was a fluke. There would be no one else. And it gave me a deep sense of relief, to know that I would not, as I had always feared, spend my life alone. That as long as I could hang onto him, I would be okay.

But when I grew into a world that appreciated me, that valued what I had to offer, I lost that fear. I discovered that he would not be the only person who would ever love me.

I understand now, Jo. I understand how someone can love you so much and do everything right, and still, somehow, it’s not what you need. I understand now what it means to make your way to a love that is more complicated, more difficult, but also more your style. I know now how it feels when that person, the one you never thought you’d find, somehow stumbles into your boarding house. Or into your Lit class.

I have something different now, with someone different, like you. And I can’t explain what makes me so sure, but I know it’s for me. Because it’s what I chose.

I’m so glad we both got to choose.