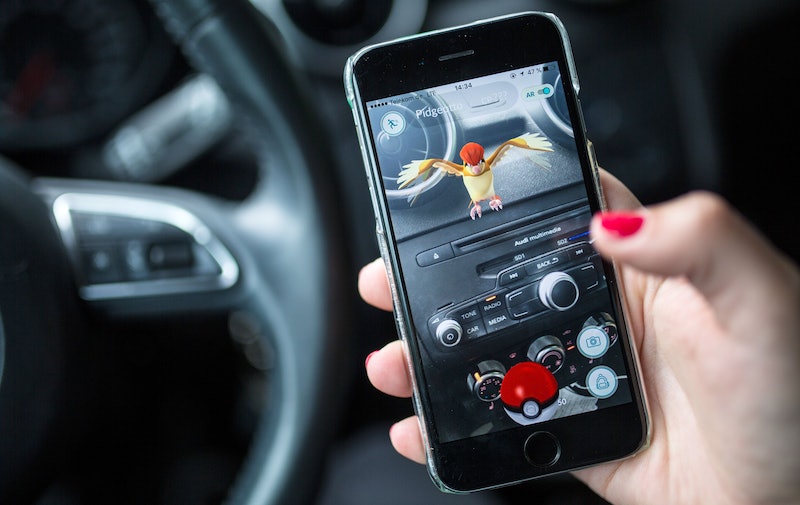 A new study just released in Journal of the American Medical Association (JAMA) Internal Medicine suggests that at least approximately 114,000 people had played "Pokemon Go" while driving, riding in a car, or walking on the street during just 10 days in July. The researchers, led by John W. Ayers of the School of Public Health at San Diego State University, analyzed tweets for words like “Pokémon” and “driving" or "car." Upon further inspection of those search results, 18 percent of the tweets seemed to be about people playing "Pokemon Go" while driving, 11 percent were about passengers in cars playing "Pokemon Go," and 4 percent were about pedestrians playing "Pokemon Go." That's a whole lot of Pokemon on the go.

To be fair, that number is simply an estimate based on the best information available to the researchers. Some of the tweets could have been jokes, or just plain lies. Playing "Pokemon Go" while you're riding in a car is probably way less dangerous than the driver playing, as long as the passenger keeps her excitement to herself.

Still, when you consider that only about 20 percent of American adults even use Twitter, that statistic about "Pokemon Go" players in cars is pretty damning. Think of all the people who must be out there playing and driving and not tweeting about it. Scary. During the same period as the tweets, 14 Pokemon-related accidents were reported by the media, but those are only from the people who admitted they were playing and there could have been many more near misses. One driver has even hit a police car while playing "Pokemon Go." Can't make this stuff up!

Well before these findings were released, we warned you that playing "Pokemon Go" while driving was a bad idea, but I guess some people just won't listen. It's true that Pokemon will hypothetically continue to pop up on the screen while you're driving, as long as you stay under egg hatching speed limit built into the game (around 10 or 15 miles per hour, according to player reports). The "Pokemon Go" buddy system also has a similar speed limit. But just because you can do something obviously doesn't mean that you should do it! Of course, the game is designed to be immersive and engaging, but drivers really should be immersed in or engaged with anything but the road!

Though it may be somewhat less dangerous for cyclists to play "Pokemon Go" while they're on wheels (and they're mainly endangering just themselves), Niantic intends "Pokemon Go" to be played by trainers on foot only. Of course, the game is designed to be immersive and engaging, but drivers really should be immersed in or engaged with anything but the road! It's still possible to injure yourself while playing "Pokemon Go" on foot — nothing is perfectly safe. But it's much less likely to happen on foot (and less like to be fatal, or close) than playing "Pokemon Go" while driving.