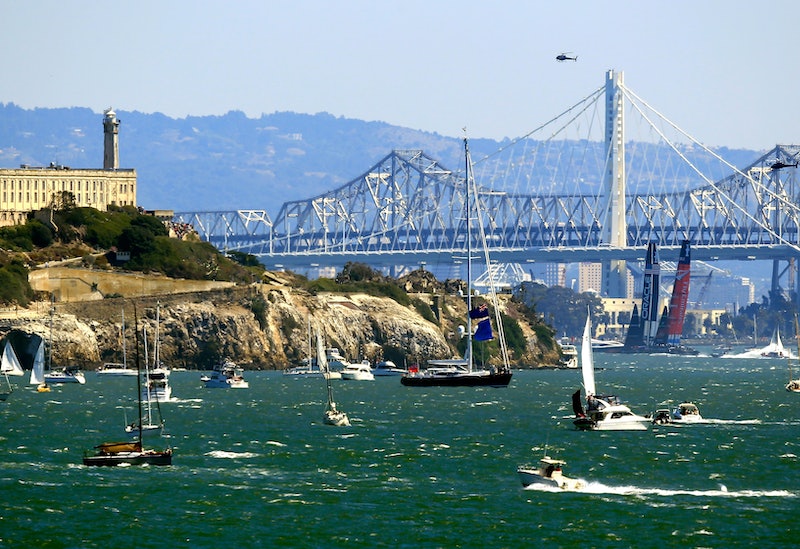 So you grew up in Oakland, California. Congratulations! Like you, I scored a childhood in one of the downright most beautiful, progressive, diverse, delicious, socially-complex parts of the country. Anyone who grew up on the sunny side of the Bay Area knows that being Oaklandish is something worth bragging about. And if you're lucky enough to have a zipcode that starts with 94, there are some things only you can truly understand. Here's how you know you're a true Oakland Native.

You know that every person in Rockridge owns this fleece

And either a Prius, Volvo, or Subaru.

"Eve Was Framed" and Darwin fishes were also favorites.

You've gotten into an argument over who has the best slice — Arizmendi's or Zachary's?

You've waited on line at Bakesale Betty for some fried chicken

Worth it doesn't even begin to cover it.

You Think of Piedmont as a bunch of privileged turncoats

We don't want you guys either.

You only know two white kids who went to an Oakland public high school...

Because this can be an incredibly segregated city.

...But you know about five who faked their address to go to Berkeley High

You know where Youth Radio is, and if you're a journalist, they taught you everything you know

They taught me everything I know.

Really, you wanna be that guy?

You mourned the death of the Festival at the Lake, but that won't stop you from smoking a bowl at Lake Merritt

That would be me at 21, playing with a robot at Lake Merritt. Like you do.

There are parts of the Oakland Hills you've never even seen

But when you do go up there, damn. Look where you live!

You really wish you still had your key to Fairyland

God bless the acid trip that birthed that place.

If you moved somewhere flat, you realized you're better at running than you thought...

...and that produce in most the rest of the country can suck it

(After a meal at your favorite downtown Oakland Vietnamese joint, that is)

Just the thought of Pho 84 makes me salivate.

You've celebrated Day of The Dead at the Oakland Museum

And you have a favorite taqueria by the Fruitvale Bart stop

You never know when you might need a spare taco.

It was never explained to you why your friend had two moms. It was just normal.

Lake Temescal was your beach

Or, at least, it was close enough.

You believe that these cranes...

...Were George Lucas' inspiration for these

You thought that all zoos had ski lifts

And free-range antelope underneath.

You've mastered the art of the free sample at Market Hall

If you work it right, you can get a full meal.

You've been hit on while riding an AC Transit bus

To their credit, it was always creative.

And you were there when shit went down at Occupy Oakland

If you weren't, we know whose side you were on.

And understand that his story is one of far too many in Oakland.

You know that you need to acknowledge privilege, even in listicle form

And that because I grew up as a middle class white girl in Oakmore, my experience of what it means to be from Oakland is likely vastly different from someone who grew up in East Oakland.

But above all else, you know there's one thing we all share: