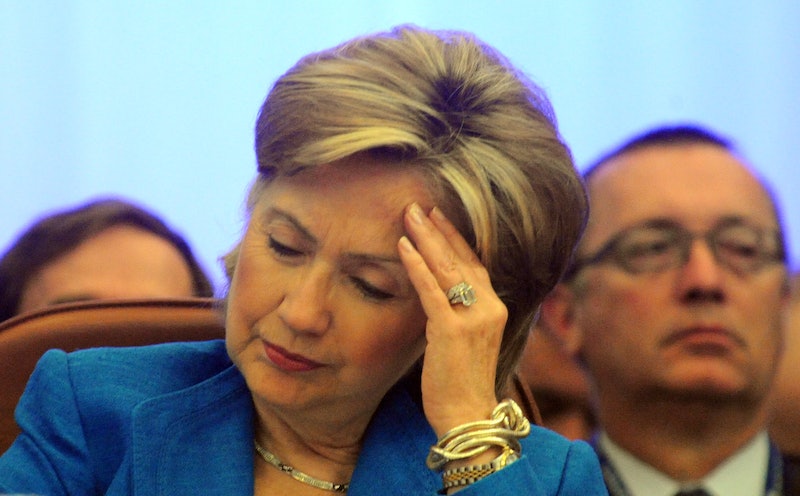 Another day, another sexist attack against the first woman nominated to the presidency by a major political party. It's a tale as old as, well, at least 2008. Taking offense to Hillary Clinton's subdued demeanor, critics launched #ZombieHillary on Twitter late Saturday in criticism of the Democratic nominee's late-night statement on reports of an explosion in Manhattan's Chelsea neighborhood. The criticism was ripe with sexist undertones.

By now, the sexism and misogyny thrown at the Democratic nominee are far from surprising, they're downright tiring. Since 2008 Clinton has weathered criticisms of her age, her cleavage, her tone of voice, her laugh, her facial expressions, her emotional demeanor, her health, and now for possibly experiencing the very human feeling of exhaustion.

Coverage and commentary of Clinton — be it from the media, her critics, or her rivals — continues to invoke a sexist double standard with the Democratic nominee often subjected to a level of criticism and scrutiny we fail to expose her male competition to. While her rivals frowned and scowled without repercussion, Clinton has been repeatedly advised by critics and members of the press to smile more. As Donald Trump and Bernie Sanders shouted their speeches, Clinton was told to "shriek" less.

Under the hashtag #ZombieHillary, Twitter users who felt Clinton appeared "tired" while speaking to the press pool traveling with her from Washington to New York City argued her appearance was proof she didn't have the stamina or strength needed to be president. Some accused the Democratic nominee of being under the influence of drugs or alcohol and questioned how she'd be able to run the country in such a "weak" state.

Oddly enough, Saturday wasn't the first time Clinton has been characterized as a zombie. The hashtag popped up earlier in September after Clinton was seen coughing repeatedly during a speech at a rally in Cleveland but can be traced as far back as April. It's often used as a means of offering thinly-veiled criticism of Clinton's physical appearance and age without the user having to come clean out and say, "I am bothered by powerful women of a certain age."

While it's true the internet has poked fun at Trump's hair, orange skin, and small hands, these threads of criticism are often short lived and not put into general use by the media in the same way that comments about Clinton's appearance, age, voice, smile, laugh, health, and emotions are. Therein lies the double standard at play.