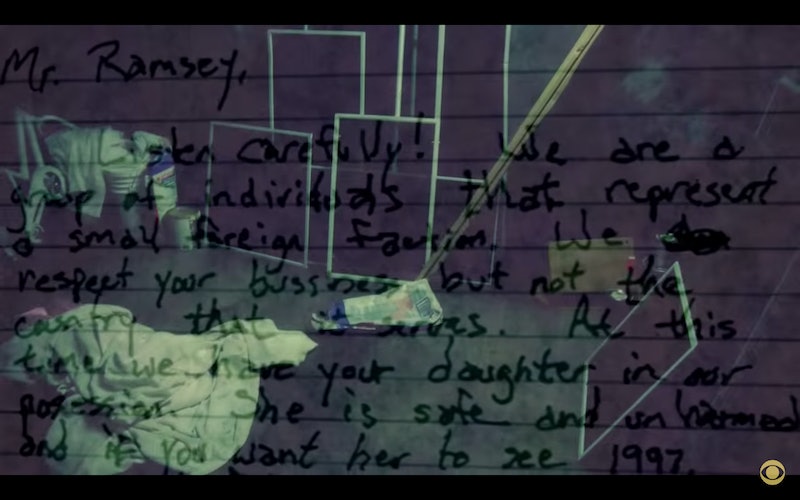 The JonBenet Ramsey case has managed to maintain its place in headlines for decades now for one important reason: multiple aspects of the murder, including who committed it, is laden in mystery. Before JonBenet's body was tragically discovered in the family's basement, her parents found a bizarre ransom letter for JonBenet signed "S.B.T.C." on Dec. 26, 1996 that prompted them to believe the child beauty queen had been kidnapped. The CBS documentary The Case of: JonBenet Ramsey features a recording of Patsy Ramsey's frantic phone call to the police, during which she explained how she found the note.

You stand a 99% chance of killing your daughter if you try to outsmart us. Follow our instructions and you stand a 100% of getting her back. You and your family are under constant scrutiny, as well as the authorities.

Don't try to grow a brain John. You are not the only fat cat around so don't think that killing will be difficult. Don't underestimate us, John. Use that good, Southern common sense of yours. It's up to you now John! Victory! S.B.T.C.

The meaning behind the cryptic signature "S.B.T.C." is still debated today, but there are a few prominent theories as to what the initials could represent. Some people observing the case, such as Fox News' Jeffrey Scott Shapiro, have pointed out that the acronym translates into "Saved By The Cross" in the Christian faith. The theory implies then that the preceding "victory" alludes to "victory over Satan." Other journalists, Shapiro suggested, observed that "S.B.T.C" is a reference to John Ramsey's naval training at the Subic Bay Training Center in the Philippines.

Though no one was ever convicted of having written the letter, there are some other unusual aspects about the ransom note, including its theatric nature and demand for exactly $118,000. During CBS' The Case of: JonBenét Ramsey, forensic scientist Henry Lee reminded audiences that the ransom note was jotted down on paper taken from Patsy's desk and appeared to have been rehearsed. Though the origin of the letter raised suspicion, John and Patsy have maintained their innocence throughout the years and were cleared from involvement in the murder by DNA evidence in 2008.

After nearly 20 years, pieces are still being added to the puzzle. And since the letter exists to this day, investigators have the opportunity to continue analyzing the text to potentially come closer to figuring out what really happened.