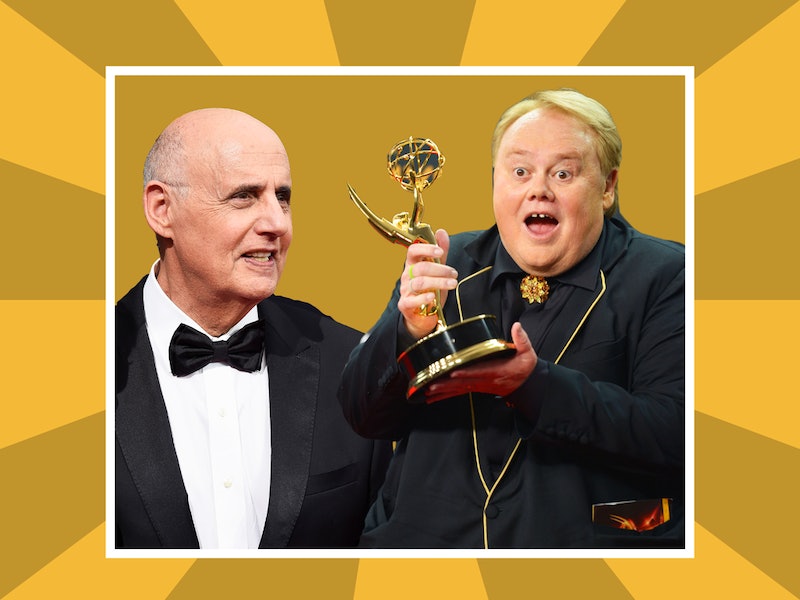 In many ways, the 2016 Emmy Awards have been relatively good for women. Talented actors like Julia Louis-Dreyfus and Kate McKinnon have won for their portrayals of complex, nuanced characters (in McKinnon's case, several of them), and for the most part, the Emmys red carpet hosts stayed away from the traditional sexist questions. Yet unfortunately, a few events during the show still caused some frustration, from Matt LeBlanc's Game of Thrones joke to Guiliana Rancic's "can women have it all?" questions to, most significantly, two cisgender male actors — Jeffrey Tambor and Louie Anderson — winning awards for playing women on-screen.

Anderson won early on in the show, for playing Christine Baskets on the FX show Baskets. The character is the mom of twins (both played by Zach Galifianakis), and Anderson's performance has won him major acclaim, including the Emmy for Best Supporting Actor in a Comedy. In his speech, the actor made fun of his gender-bending role, saying, “I haven’t always been a very good man, but I play one hell of a woman" and, later, noting his mom as inspiration for his character. Without question, Anderson's role is played for comedy, much like John Travolta's portrayal of Edna Turnblad in Hairspray or Robin Williams' turn as the titular Mrs. Doubtfire. Yet it still speaks to a troubling trend in Hollywood, where cisgender men are playing the roles of trans women or older women, rather than women from those demographics — who are already hurting for quality parts, far more than their male counterparts are — getting these roles instead.

It's Tambor's win that might be the most problematic. His role in Transparent is a groundbreaking feat for TV, and his performance as Maura, a transgender woman, is nothing less than stunning. By no means am I saying that he doesn't deserve to be honored. My issue with Tambor's win is exactly what the actor himself brought up in his acceptance speech —that it's troubling to see a male, cisgender actor in the role of a trans woman, when there are so many talented female trans actors not being cast in parts on TV. As good as Tambor is as Maura, the part should, ideally, be played by a trans woman, and yet Hollywood, as a whole, has been extremely cautious when it comes to hiring trans actors to play trans characters — or characters of any kind — in TV and film.

Tambor took pain to acknowledge this unfair truth in his speech, which was a passionate and eloquent call to action, imploring Hollywood to hire more trans actors. He expressed his hope that he would be the last cisgender man honored for playing a trans woman on TV, and hopefully, his words won't go unheard, and real change will eventually be made.

It should come as no surprise to anyone that Hollywood has a long way to go before gender equality is achieved; according to a 2015 study by the Center for Women in Television and Film, women made up just 12 percent of protagonists in the top 100 grossing films released in 2014. In TV, meanwhile, women fared a bit better, but still not well, making up just 39 percent of all speaking characters in television during the 2015-2016 season. With statistics like those, it's distressing to see some the few parts that are available for women going to male actors. And the numbers are far more dire for trans actors.

Let's hope that in the future, Tambor's own words and call for more women on-screen will be heard by studios everywhere, and more women — particularly trans women — will be cast in roles, rather than lose out parts to their male peers.