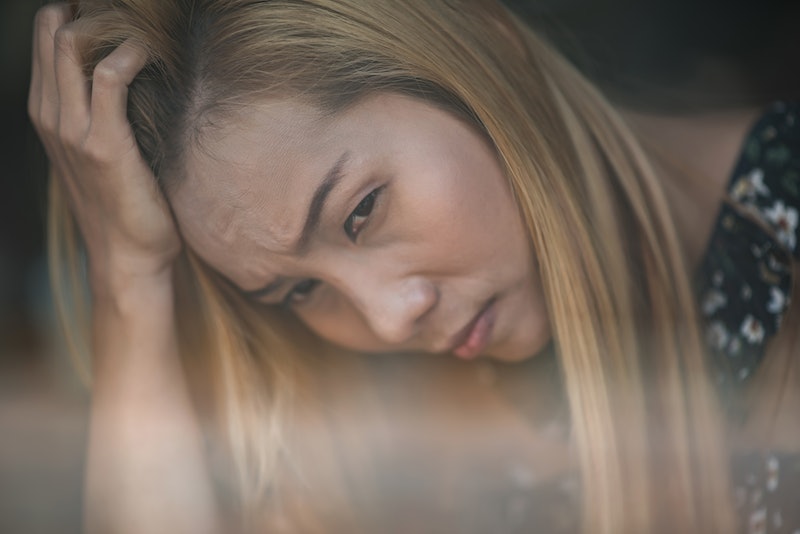 Mention the word "anxiety" to almost any millennial and you're bound to see a glimmer of familiarity in their eyes. Even if they don't suffer from an anxiety disorder themselves, odds are that they either know someone who does, or they've at least encountered a bit of anxiety in their adult years. We're a generation well acquainted with anxiety —in fact, a few years ago, young adults took the award home for most anxious, stressed out people in America. A 2013 report from the American Psychological Association found that individuals between the ages of 18 and 33 showed the highest levels of stress. On a scale of one to 10, they averaged a score of 5.4. And 39 percent of these anxious millennials said their stress levels had raised significantly just in the past year.

In 2016, those numbers changed a little — middle-aged folks between 40 and 59 were found to be the least happy and the most anxious, according to a study from the Office of National Statistics. Bustle spoke with Jodi Aman, a licensed psychotherapist with more than two decades of experience and the author of You 1 Anxiety 0 , who told us, "Anxiety increases as people age." But anxiety remains a huge concern for many young adults, especially since, as this new information indicates, it won't simply go away as we age. Anxiety is still pretty commonplace among young adults, and Aman says it's an issue that shouldn't be taken lightly, since it can affect our overall health and wellbeing.

Here are five reasons why anxiety is so common among twentysomethings.

On average, millennials spend 3.2 hours a day on their phone. That adds up to almost a full day of each week that we're glued to a tiny screen. We're obsessed with Facebook, Twitter, Gmail, Instagram, and Snapchat (just to name a few), and we often feel the need to be plugged in at all times. 93 percent of us admit that we regularly use our phones in bed at night, while 80 of us are on our phones in the bathroom.

Aman names our social media use as the number one cause of our rising anxiety. Not only does it consume much of our time that we could otherwise be spending interacting with other humans, but constantly using our phones to "watch trauma that is far away" takes a toll on us, Aman says. Our heads get filled with frightening information and we may fear that our world is crashing down.

Furthermore, Aman says "the constant comparing to other people" that happens as a result of frequent social media use is only hurting us in the long run. The more time we spend looking through everyone else's lives, the more we think we're not good enough just the way we are. So if you're looking to cut down your anxiety, consider putting down your phone every once in a while and taking in all the good stuff that's happening around you in real time.

In the survey conducted by the APA, researchers found that job stability and money were two of the primary things millennials get anxious about. It's not because we're lazy and can't keep a full-time job; rather, many of us happened to be graduating college just as the economy collapsed, so we weren't left with the best prospects. Maybe we had trouble finding work or got laid off unexpectedly. Whatever the case may be, we haven't always had it easy when it comes to careers.

On top of that, your 20s aren't the most financially stable decade of your life. Millennials are often stuck paying hefty student loans while also trying to figure out how they're going to pay their enormous rent. Additionally, it was recently reported that one in every five young adults are financially supporting an aging parent, and these individuals spend an average of $18,250 a year doing so. And to put the icing on the cake, we're simply not able to saving much money. No wonder we're so stressed out.

3. We Experience Failure More Often Than We Expected We Would

Mike Hais, a market researcher and co-author of Millennial Momentum, told USA Today that "[Millennials] were sheltered in many ways, with a lot of high expectations for what they should achieve." Most of our parents raised us to think we could do anything, be anything, accomplish anything! But the reality of adult life is much harsher than that. We don't always get what we want, and many of us weren't exactly equipped to face defeat head on.

All that failure makes us feel highly insecure about ourselves. "Worried that you are 'less than' what you are supposed to be makes you not trust yourself, and then you're ripe for anxiety," Aman tells Bustle. She recommends that we build trust in ourselves and connect to our greatest gifts, so that no matter what happens on the outside, we can still be confident with ourselves.

The 2013 APA study found that 33 percent of highly stressed Americans had never discussed their anxiety with their medical provider. Norman Anderson, CEO of the APA, said in a statement, "Unfortunately, our country’s health system often neglects psychological and behavioral factors that are essential to managing stress and chronic diseases." Doctors and nurses treat us for physical ailments we experience, but our mental health tends to get left by the wayside.

When young adults see their medical provider, they're typically either feeling very ill or they're just there for a simple check up. It doesn't often occur to us to go see a doctor for the sole purpose of discussing our anxiety issues, which may result in a lot of anxiety disorders going undiagnosed. If we taught the younger generation that stress and anxiety need to be treated the same way as any other problem in our body, we'd likely have a new generation more comfortable with the idea of seeking out care for their mental health.

Millennials don't drink alcohol and do drugs any more than any other age group in America, but that doesn't mean there aren't any issues with how much we abuse substances. When we're young, we often tend to feel sort of invincible, so we think we can party often and bounce back quickly. That mindset can be quite destructive, though — drinking a lot and using drugs can make your stress and anxiety spike through the roof, especially if you're not eating a healthy diet on a daily basis.

Aman's advice is to exercise regularly, eat whole foods, and stay away from using substances to self-medicate, because that will only make everything way more stressful. She also says, "Get involved in the community, help other people, and you will feel empowered, like you can change the world instead of being a victim of it." It may sound hokey at first, but you''ll learn that when you put that into action, your anxiety doesn't stand a chance.

More like this
6 Abortion Advocates To Follow On TikTok
By Sara Youngblood Gregory
I Was All For Medicating Mental Health Issues – Just Not For Me
By Anonymous, as told to Dana Smith
I’m on Two Mental Health Medications and I Only Love One
By Anonymous, as told to Dana Smith
Every Single Big & Small Way You Can Fight For Abortion Rights
By Tess Garcia
Get Even More From Bustle — Sign Up For The Newsletter