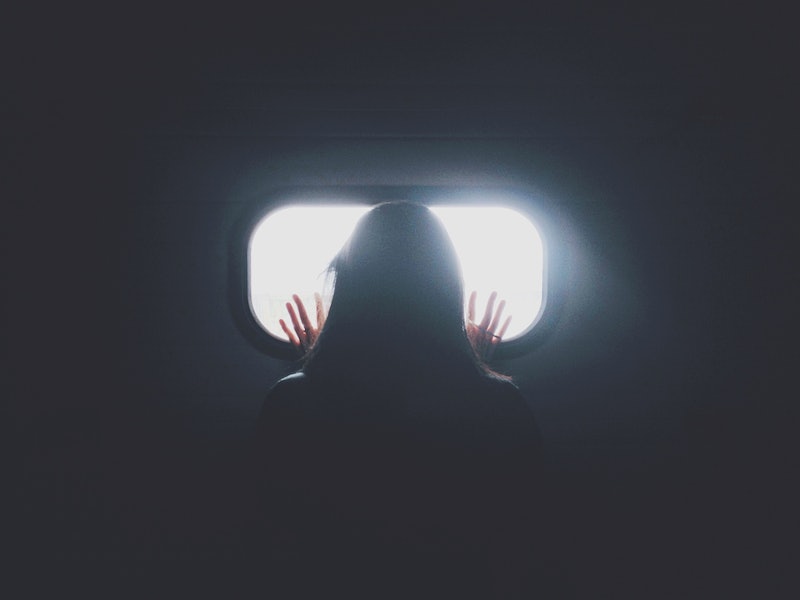 If you have an anxiety disorder, then you're well aware it is no cup of tea. The worry, the panic, the stress — it can really take a negative toll on your life. But perhaps just as bad is watching someone you love deal with the same issues. That's why it's a good idea to keep an eye out for signs someone has an anxiety disorder, and help them get treatment if necessary.

Of course I'm not saying it's up to you to monitor everyone else's eccentricities and possible disorders 24/7. But if you happen to notice a problem early on, it may be of quite the benefit to your friend, partner, or family member. That's because anxiety is the type of thing that builds on itself, so spotting it ASAP is key.

"Anxiety usually emerges as a reaction to stressor(s). The stress causes physiological symptoms that are then misinterpreted as a threat," says Dr. Michele Barton in an interview with Bustle over email. "In the case of anxiety, this becomes a chronic/continuous state of being for anxious people who are then in this state constantly. Unfortunately, as time goes on, without intervention like psychotherapy and/or medication the body's reaction to this perceived threat becomes more intense, more frequent, and extended in duration."

Once spotted, whether by you or the sufferer, there are a myriad of treatments that can help reign in anxiety symptoms. Read on for some of the signs of an anxiety disorder.

1. They Complain About Feeling Worried

I know, I know... everyone worries. So it probably doesn't seem like that big of a deal when a friend, family member, or partner complains about being uptight or tense. But there is a difference between normal stress, and full-on anxiety. "In the case of generalized anxiety disorder, it means having persistent anxious thoughts on most days of the week, for six months. Also, the anxiety must be so bad that it interferes with daily life and is accompanied by noticeable symptoms, such as fatigue," said Amanda MacMillan on Health. See the difference?

2. They Have Some Pretty Bad Phobias

If your best friend needs to hold your hand in an elevator, or gets super upset on planes, then it's pretty clear he or she has a phobia. Phobias are a type of anxiety disorder, and they obviously make a life feel way scarier than it needs to be. "If you have a phobia, you may experience a deep sense of dread or panic when you encounter the source of your fear," said Andrea Wodele and Matthew Solan on the medical site Healthline.com. So take note, and be really comforting, the next time your friend completely loses it.

When anxiety gets bad enough, it may cause the sufferer to start avoiding "scary" situations all together. As Alice Boyes, Ph.D., said on Psychology Today, "Avoidance is the number one behavioral symptom of anxiety. People avoid situations and actions they fear will trigger anxiety or where they'll be unable to escape." So maybe your friend stops going in elevators all together, or suddenly refuses to fly. This type of avoidant behavior makes a lot of sense in theory (i.e., don't go places that scare you), but it will really start to negatively affect their life.

4. They Can Hardly Ever Sleep

Keep an eye on your chronically tired friends and fam. Of course, their exhaustion could be caused by any number of things — stress at work, late-night Netflix binges, etc. But it can also be a sign of an anxiety disorder. According to MacMillan, half of the people who suffer from generalized anxiety disorder have sleep problems. And yes, it's because they are lying awake all night worrying.

5. They've Had A Panic Attack

If you've ever had a panic attack, then you know how much it sucks. So have a little compassion for your panicky friend or family member, and then maybe help guide them towards some treatment. That's because panic attacks, or panic disorder, can quickly get out of control. They can even lead to agoraphobia, which is the fear of being in places where escape or help would be difficult, according to an article on the health website Helpguide.org. This can lead to the aforementioned avoidant behavior, and it's a slippery slope from there.

6. They Seriously Hate Being In Public

Constant anxiety is obviously incredibly difficult to deal with mentally, but it can also take a toll physically. Physical symptoms of anxiety include headaches, nausea, shortness of breath, dry mouth, and shakiness, according to WebMD.

Is your SO quirky to a fault? Maybe they can't leave home without checking the stove 20 times, or making sure all the lamps are unplugged. It may seem laughable, but these types of actions are serious signs of obsessive compulsive disorder. OCD is yet another type of anxiety disorder which can lead people to have unwanted thoughts, feelings, and ideas (AKA obsessions). They may also have strange behaviors — like unplugging all the lamps — that they feel driven to do (AKA the compulsions). Often the person carries out these behaviors in an effort to get rid of the obsessive thoughts, but it only provides temporary relief, according to an article on Psychology Today. And that's why OCD is so terribly exhausting.

Everyone's shy from time to time, but someone with anxiety may be painfully so. As MacMillan said, "Social anxiety disorder doesn't always involve speaking to a crowd or being the center of attention. In most cases, the anxiety is provoked by every day situations such as making one-on-one conversation at a party, or eating and drinking in front of even a small number of people."

10. They're Still Scarred From An Event

If you know an anxious person who went through a particularly traumatizing event, it could be likely they're suffering from post-traumatic stress disorder, or PTSD. This is an anxiety disorder that may develop after exposure to a terrifying event in which several physical harm occurred or was threatened, according to an article on Psychology Today. Think natural disasters, personal assaults, or military combat. Such things can really do a number on a person, and the effects can last for years.

11. They're Full Of Self-Doubt

Plenty of people are smart and capable, and yet still suffer from horrible self-doubt. When that's the case, it could be anxiety that's to blame. That's because persistent self-doubt is a common feature of anxiety disorders, according to MacMillan, and it can start to negatively affect work and relationships.

In fact, anxiety of all kinds can have a seemingly endless list of negative affects on health, relationships, work, and well-being. So if someone you care about is suffering away, try to get them some much-needed help, or at least try to nudge them in that direction.

More like this
These 4 Zodiac Signs Will Be Extra Lucky In October
By Brittany Beringer
Here’s Why Sagittarians Should Pursue A Career In Academia
By Nina Kahn
Think Your Partner Is Cheating? These Tarot Cards May Confirm Your Suspicions
By Kristine Fellizar
This Psychological Effect Might Be Keeping You From Hitting Your Goals
By Lexi Inks
Get Even More From Bustle — Sign Up For The Newsletter